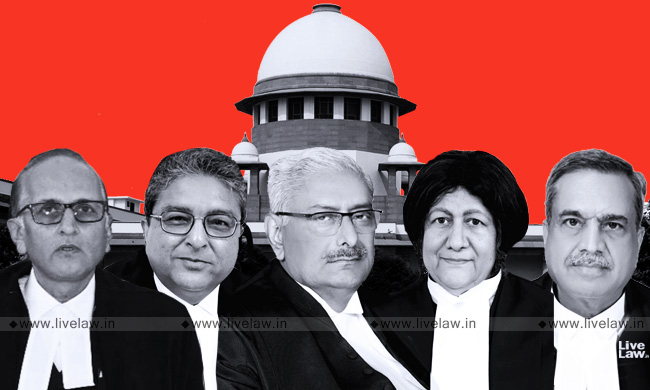 A Five Judge Bench headed by Justice Arun Mishra on Tuesday resumed the hearing of cases relating to the interpretation of Section 24 of the Right to Fair Compensation and Transparency in Land Acquisition, Rehabilitation and Resettlement Act, 2013."Urban Land Ceiling and this Act (Land Acquisition) have been misused like anything! The deserving is not getting...only the one having the...

A Five Judge Bench headed by Justice Arun Mishra on Tuesday resumed the hearing of cases relating to the interpretation of Section 24 of the Right to Fair Compensation and Transparency in Land Acquisition, Rehabilitation and Resettlement Act, 2013.

"Urban Land Ceiling and this Act (Land Acquisition) have been misused like anything! The deserving is not getting...only the one having the power is...", remarked Justice Arun Mishra on Tuesday.

"There was misuse of 17 (of the 1894 Acquisition Act, on special powers in case of urgency). There is no doubt...4 and 6 were also misused. Notification was issued for 1600 acres and only 15 were acquired in Haryana. Notification without possession or rehabilitation. All the big builders were involved in it. There has been no compliance so far. Even the CBI is not doing anything...", he had narrated last week.

"The CBI is saying no culprit is found...", the judge said on Tuesday, adding, "Urban land ceiling has also undone several land reforms...distributive justice was snatched away..."

On behalf of the respondents, the submission that was reiterated was in the event that either physical possession is not taken or compensation is not paid, the acquisition would lapse, even if these riders of section 24(2) are not qua the entire section 4 notification but only a specific area. That these acquisition proceedings be commenced afresh under the new Act was urged.

"The purpose is to get the higher compensation under the new Act. So instead of lapsing and going through the entire procedure of social impact assessment and all again, why can just higher compensation be given as per the proviso?", ventured Justice M. R. Shah.

As to the suggestions of limited lapse, Justice Ravindra Bhat also observed it would be akin to "punching holes into an acquisition which is one whole".

In his turn, Senior Advocate Gopal Sankaranarayanan argued that in 99% of the cases, the true beneficiaries of section 24(2) are the small agrarian landholdings and tribal communities, countering a view that it is the large landowners and big farms that benefit from the lapse of an acquisition. He pleaded that the "or" in section 24(2) be accordingly be read as "or".

He advanced that if the three scenarios under sub-sections (1), (2) and (3) of section 31 of the old Act (of offer and payment, deposit in court or compensation otherwise than in money) have been complied with, then the compensation would be assumed to have been 'paid' for the purpose of section 24(2) and that for the land acquisition to lapse then would be "harsh".

"What if payment is so made but possession is not taken?", Justice Mishra asked. "Then it would still lapse", replied Mr. Sankaranarayanan. But he insisted that the deposit is necessary and the Standing Order (providing for deposit in the treasury) is violative sections 31 and 55.

It was stressed again that the proviso be read with section 24(1)(b).

"If You Make One More Retort, I Will Take Contempt Against You":Justice Arun Mishra To Sr. Adv. Gopal Sankaranarayanan [Courtroom Exchange]

"Where payment has not been tendered, let the higher compensation, as contemplated in the proviso, be given...let the proviso be given a wider meaning. Why should we suffer because often strict interpretation?"

"Section 24 is basically a savings clause with an exclusionary provision. 24(2) looks at the actual state of affairs on the date of coming into force of the 2013 Act- whether physical possession has been taken, whether compensation has been paid...the insertion of 114(2) protects those rights under 24 which would not have been protected under the General Clauses Act. (1)(b) is the classical savings provision and under (1)(a), you effectively save all proceedings. If you have revived the proceedings under (1), you need the deemed lapsing under (2)", contended Senior Advocate Nakul Dewan.

"There is no revival. There is only saving of what is meant to continue...a wholesale importation of what existed", clarified Justice Bhat.

"If we lift the proviso, there would be incongruity. (1)(b) would have to be read down. The 5 years part would have to go. Then you may have made the award at any time, but if the compensation is not deposited, consequence would follow...if the riders are done away with, then acquisition from 1910 would have to go! Either 50,000 crores would have to be paid or the land which extends to Raisina Hills would have to be returned! (in reference to the claims of an earlier advocate, where the bench had amusedly noted that the President of India would have to be dislodged and even the judges would be ousted from their residences if the land was to be restituted)...", explained Justice Mishra.

In connection with the exclusion of the time lost on account of a court ordered stay/injunction, Senior Counsel Jaideep Gupta sought to submit, "If the award is not made, there is no question of excluding any time...injunction has to be considered only in case of lapse, not otherwise"

"Not necessary. You may have the section 4 notification in 2010 and that under 6 in 2012. This is a clear-cut case of a delay of 2 years without any stay", observed Justice Bhat.

"The Land Acquisition proceeding is not complete until all formalities are complete, the last of which is compensation. If possession is taken and compensation is not paid for a long time, the State cannot say that it has rightfully acquired the properties.....the Right to Property is a constitutional right under Article 300A. Can the State now say that the Court, not the Legislature, must insert certain words or delete certain words or read a provision in a certain way? (At this point, SG Tushar Mehta announced emphatically that where there are two negatives 'or' is to be read as 'and'.) And the State is coming to the Court and not going to the Legislature to do so when it easily can." began Senior Counsel Dushyant Dave.

"Deposit in the treasury does not achieve anything, even if it has been a long standing practise. Under the old Act, the Court and the Government(for private acquisition) were stipulated for the purpose of deposit. Court is the custodian of the citizen. When the deposit is made in the Court then it is deemed to be money out of the pocket of the Government. If this is done only then the land acquisition is subsisting. Can the Government put its money in its own pocket and say that it is paid?", continued Mr. Dave.

"For so many years, you didn't pay me, you blocked my right to sell and now you want to give me compensation under the old Act?....Suppose my right to practice is taken away, it is acquired by the Government, then I would be at a loss, I am unsuited to do anything else in life. These are farmers who have been so for 10 years, 15 years, generation after generation. They would themselves unfitting in the society.... It is not that the Parliament is not careful that development might have taken place. That is why it has said that acquisition should be rehashed and redone under the new Act", averred Mr. Dave.

"Higher compensation is to be given to beneficiaries under the 4 notification. There might be intervening interests that come later like new purchasers and power of attorney holders. Should the benefit of restoration or higher compensation go to them?" Justice Mishra wanted to know.

"31(1) says tender and payment and in the eventuality, deposit under 31(2). Can it be said that non- deposit is non- payment for 24(2) and hence, there would be lapse? If payment is tendered and then it is refused, how would you pay it if somebody is refusing", questioned Justice Shah.

Mr. Dave will respond to these tomorrow.