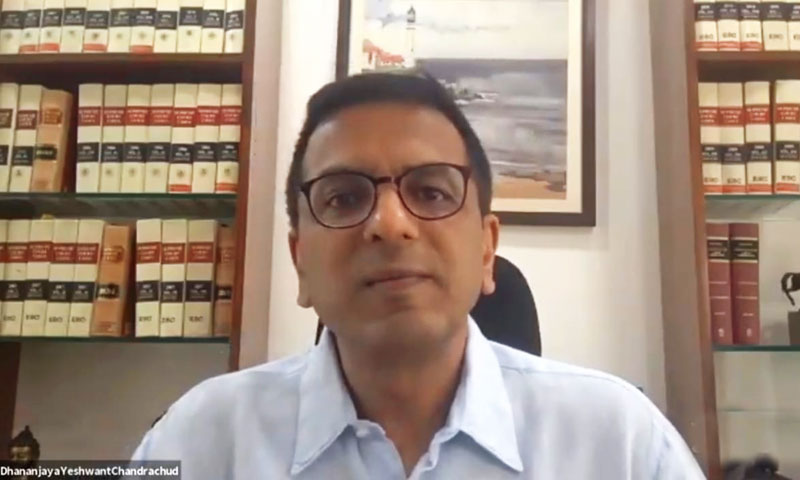 Virtual courts cannot fully displace open court hearings, said Justice D Y Chandrachud, judge of the Supreme Court on Sunday.He was speaking at a Webinar organized by 'Nyaya Forum' of NALSAR University of Law on the topic "Future of Virtual Courts and Access to Justice in India"."I want to dissuade people from the idea that virtual court hearings are some sort of a panacea or a formula, which...

He was speaking at a Webinar organized by 'Nyaya Forum' of NALSAR University of Law on the topic "Future of Virtual Courts and Access to Justice in India".

"I want to dissuade people from the idea that virtual court hearings are some sort of a panacea or a formula, which is a substitute for open court hearings. We had no choice in the pandemic, but to resort to hearing via video conferencing. They will not be able to replace physical court hearings", he said.

As his vision for the future, he said.

"What I perceive for the future is a healthy mix between the use of technology for court hearings in areas where we believe technology is well suited; but we must necessarily have open court hearings also, which constitutes the spine of our system".

He also stressed that the concept of open justice would remain relevant even in virtual courts.

"The essential nature of judicial essential, access of public to a public court room, must be preserved in video-conference. All recourse to video conferencing must be available to public access (sic)", he said.

Technology for a more efficient and accessible system of justice

He said that he saw technology as an "adjunct of rule of law".

Three fundamental principles of interface between law and technology were mentioned by him :

While discussing technology in court processes, he said, one should also keep in mind that a large section of the society has no access to technology and internet. Quoting from TRAI data, he said that internet density in India is around 52%, and out of that around 25% has access to smart phones.

"We must ensure that technological divide should not become a means of exclusion; technology should be used for inclusive justice", he cautioned.

He also spoke about the need for imparting training to lawyers, who may not be well-equipped with technology, and said that the bar and bench must work in collaboration for that.

"We have to be conscious of the fact that most of the lawyers might not have access to technology and we have to aid them in the same", he said.

"Training of lawyers is a collaborative exercise. Bodies of lawyers and the Courts have a joint responsibility because we are running one institution. The Bar and the Bench represent two pillars of the administration of justice", he said.

The judge, who also happens to head the e-committee of the SC, mentioned the major projects of the e-courts committee as below :

Elaborating about the ICJS project, he said that it will be a single platform to make available all meta data in relation to the administration of criminal justice system, like FIRs, Chargesheet etc. It was started as a pilot project in Telangana in December 2018, and is being replicated in other parts of the country.

He said that 60% of the delay is due to the non-service of summons. To address that National Service and Tracking of Electronic Process (NSTEP) system has been developed.

Every district court has it own website where judicial orders are uploaded. There is the CNR number which is the unique identifier of every case. This can be converted into a QR code which can allow the user to get the entire history of the case.

There is also an aspect of the Case Information Software which allows a person to hide the name of the parties in case of sensitive matters. This ensures that privacy of the parties is maintained.

He also said that a system was being developed for e-payment of court fees, court deposits etc. This portal will be integrated with state-specific vendors such as SBI and others.

He further informed that the customization of the Case Information System was done using an open source software - Ubuntu Linux- instead of a licensed software, and thereby an amount of Rs 340 Crores was saved from the public exchequer.

Justice Chandrachud summed up the values underlining the digitalisation project in one word - TEST, standing for Trust, Empathy, Sustainability and Transparency.

J. DYC: We should not be afflicted with the disease called "Appellate Court-itis". This is when you focus on courts at the top of the tier. The real interface of the citizen is with the district court and we should ensure that we enable technology at that level.

Our processes need not be as old as our principles

Quoting Susan Hood, he said that our processes don't need to be as old as our principles.

Justice Chandrachud also made extensive references to the book "Online Courts and the Future of Justice" written by British legal scholar Richard Susskind.

He said that the Susskind made a compelling case for the adoption of technology in courts.

Referring to the author, the judge said that despite the rapid evolution of society in digital age, court processes are relatively untouched by change, resulting in a denial of access to justice. Also, global stats indicate that access to Internet is higher than access to justice.

"Technology at its core must be about increasing access to justice. Our court procedures are just too tardy and unintelligible to common citizens", he said.

Technology should bring about a change and unfold the true potential of the judicial system, he added.

Experiences with Video Conferencing in SC

Barring some occasional glitches, the SC had been by and large handling video conferencing hearing smoothly, he opined.

"COVID-19 descended without a warning. We limited the number of lawyers, sanitised the courtrooms et al. However, access to justice can not be suspended even if there is a lockdown", he said.

"What I wish to emphasize is that it was not possible to switch to video-conferencing overnight. However, we were able to do so because of the existence of robust infrastructure in place". he added.

He also expressed the hope that technology will make litigation an attractive choice for young law graduates.

"I feel technology will make it more attractive for young lawyers who would otherwise want to join law firms", he said.

J. DYC: One of the great sources of sadness is that we want more and more law students from the best law schools to come to the lawyering side of the profession. I feel technology will make it more attractive for young lawyers who would otherwise want to join law firms.

On being asked about the adoption of technology leading to legal services becoming more expensive, he replied.

"It's actually to the contrary. The cost of technology is borne by the State. We don't pass on the investment that is made to the infra, to the litigants".

He also spoke about the need to ensure that technology does not exclude differently abled persons.

"There are effective technological tools that would aid every aspect of legal management, including legal info management to be available to the visually challenged. One of the key features that I've been personally supervising is that they should have access to data.

I believe that we must have in due course a judge of the Supreme Court one day who will be visually impaired. And certainly judges in the HC and lawyers should lead lives of dignity. There is no exception to the rules of human dignity that excludes the visually impaired" he said.

(With inputs from tweets by Radhika Roy).