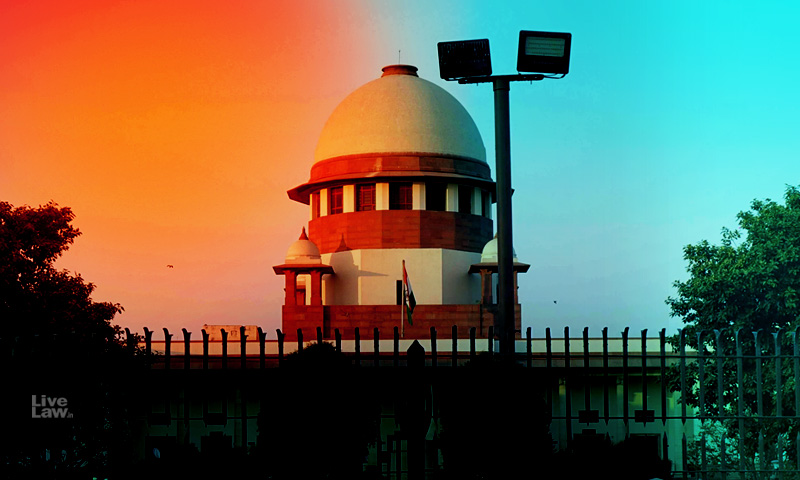 "The time has come when the Judicial organ of the State as whole must evolve into the age of technology and in such view, it is imperative that all the stakeholders must welcome, accept and act as per the necessities of a fair adjudicatory process before the Virtual Court system. Notwithstanding the resistance and technological challenges faced by the Virtual Court System today, at...

"The time has come when the Judicial organ of the State as whole must evolve into the age of technology and in such view, it is imperative that all the stakeholders must welcome, accept and act as per the necessities of a fair adjudicatory process before the Virtual Court system. Notwithstanding the resistance and technological challenges faced by the Virtual Court System today, at its stage of dormancy, efforts should continue to strengthen its roots."

Recognizing the significant role played by the new-age Virtual Court Room System during the difficult times of the COVID-19 pandemic, the Supreme Court has stated that the  practice of holding Court hearings through the video-conferencing mode was not against the concept of "open court hearing".

Recently, the Chairman of the Bar Council of India had advised the CJI against continuation of virtual hearings post lockdown, stating that the same affects the "open court room practice" and judicial transparency.

The Top Court has now said in a press note that the process of adjudication itself does not demand an "Open Court".

It has stated that the Open Court, in its physical existence, was evolved at a time when technology was not as advanced. However, in the new age where technology has tapped almost every aspect of our lives, it cannot be said that Virtual Court Rooms are in many manner "antithetical" to the open court system.

"What needs to be underlined is that the traditional Open Court system, in its physical manifestation, and new age Virtual Court System are not antithetical to each other; on the contrary, both systems could definitely co-exist, delivering deliver qualitative justice, wherever deployed in light of extant circumstances," it has said in a detailed note issued on Saturday.

'Openness' of Courts, the Supreme Court has said, is a tool to ensure procedural fairness and transparency, so that the 'rule of law' dictum of an impartial and uniform adjudicatory process is adhered to and achieved.

For the same, presence of Advocates, Litigants and Media representatives is allowed in the Court premises. Since the same has now been secured by way of Virtual Court rooms, the Top Court said that the essentials of an Open Court system are not "physical bodily presence" of the parties and/or the media in a brick-and-mortar Court room.

As per the note, an Open Court mandates (i) Access of all the parties to the hearings; (ii) Right to participate in hearings, to the parties or their legal representatives; and (iii) Access to Court hearings and their outcome, to the public and media.

"If the aforesaid three mandates of an 'Open Court' System could be secured and ensured through virtual presence and communication, the functionality of a Virtual Court cannot be said to lacking adherence to the concept of Open Court hearing," the Supreme Court said.

"The argument that the hearings are not taking place in general public view does not hold water as, even before the pandemic, access of general public was not being allowed and was regulated so that no inconvenience is caused to the Bar members, and also to minimize security threats and instead, members of the media, as public representatives, were being granted access in each Court room."

Dispelling the notion that Virtual Court rooms do not offer "open access" to court proceedings, the Supreme Court intimated,

"Currently under the virtual court system, the litigants indicated by the Advocate on Record, Advocate on Record himself and the Senior Counsel are provided with the video conferencing links to join from remote points. They are able to hear, see and respond to the other party and the Bench simultaneously, during the proceedings of the Virtual Court.

...besides the parties and their respective Advocates of a case being heard by the Bench, the parties and/or Advocates awaiting the turn of their cases to be taken up are also joined 'virtually' beforehand and, exactly in the manner possible in physical Courts, they do witness, albeit on their virtual screens, the live proceedings of cases taken up before theirs. Most importantly, a special Viewing Facility has been provided by the Registry in the Video-Conferencing Room established for parties in the Supreme Court premises, where the media persons, as representatives of the public, are allowed access and can watch the proceedings of all the matters being held before the Virtual Court(s). The proceedings of almost all cases, as well as their outcomes, are being widely reported in the Media."

In view of such state of affairs, the Top Court said "These developments are testimony to the fact that the proceedings before the Virtual Court(s) of the Supreme Court of India are open in every sense of the term, both physically and virtual, except that they are not requiring physical presence of all the parties/counsels/media-persons at the same time under the same roof, in a Court-room before the Hon'ble Bench."

It went on to state that 'Open Court' hearing, in its physical manifestation, is neither a right nor can be claimed as such by any party to any lis.

"Access to public in an Open Court system, does not imply in any manner that unlimited and unregulated access to members of public at large has to be granted inside a Court of Law, for its functioning to be witnessed and/or validated by them. Courts of Law as public places, in more senses than one, are different from Public Parks or such other Public Places/Spaces," it remarked.

(1) Open Court is not an end in itself, but a medium for fair adjudication;

(2) Open Court hearings cannot be claimed as a matter of absolute right;

(3) Open Court necessitates access to litigants and public, and/or their representatives, but not their bodily presence together in any given place;

(4) There may be alternate models of Open Court system, in its physical sense.

As of May 1, 2020, the Supreme Court has heard 538 matters in addition to 297 connected cases. In 22 days of hearings conducted via video conferencing, 116 benches of the Top Court have delivered judgments in 57 CAV matters and in 268 connected matters.

On comparing this data with what the achievements of courts in foreign jurisdictions, the Supreme Court said,

"The Judiciary of the Indian Republic is known and acknowledged as one of the most robust and progressive judicial institutions around the world, supporting and serving a democratic order. The aforesaid data from across various Judiciaries, would indicate that, crippled as they are by the lockdowns and social distancing norms in place to fight the spread of the COVID-19 infection, few have been able to manage what the Supreme Court of India has delivered, despite being in almost similar circumstances though with much less resources."

Lastly, the Supreme Court remarked that justice cannot be "spoon-fed".

"Justice delivery, even at the door-steps of the stakeholders, requires the stakeholders of the ecosystem to diligently discharge their role and duties, prescribed and required in the scheme of things. The advantages of the Virtual Court System, especially in terms of time, energy and money saved by the litigants and Counsels in ensuring their presence before a Court are innumerable and could be game-changers too," it concluded.