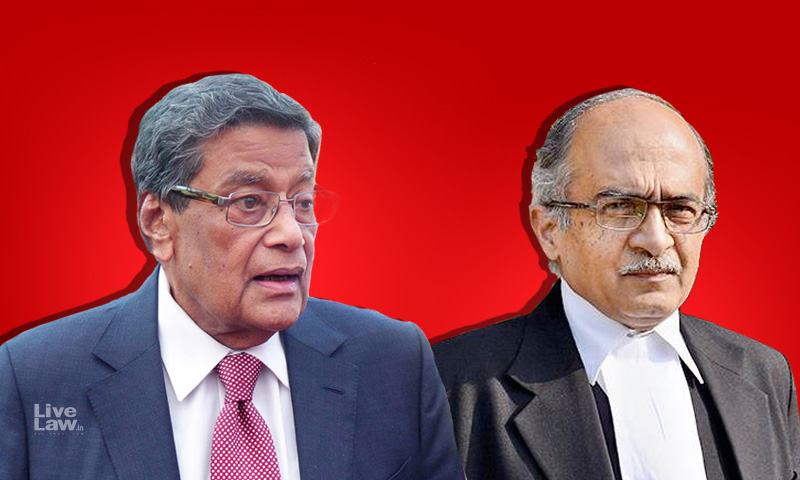 The Supreme Court has adjourned its hearing in the Prashant Bhushan contempt case for thirty minutes after asking Bhushan and his counsel, Senior Advocate Rajeev Dhavan, to 'think over'.At the beginning, Justice Mishra asked the Attorney-General for India, K K Venugopal, about what could be done and asked the AG to guide the Court. To this, the AG responded, "We have serious statements made...

The Supreme Court has adjourned its hearing in the Prashant Bhushan contempt case for thirty minutes after asking Bhushan and his counsel, Senior Advocate Rajeev Dhavan, to 'think over'.

At the beginning, Justice Mishra asked the Attorney-General for India, K K Venugopal, about what could be done and asked the AG to guide the Court. To this, the AG responded, "We have serious statements made by former Judges about Supreme Court having failed democracy. I also have a complete list of former SC Judges making comments about corruption in judiciary."

The AG then continued :"They seek the improvement of administration of justice. This is a case where your Lordships should forgive him (Bhushan) or perhaps warn him. It is not necessary to punish him."

Justice Mishra, with reference to the Supplementary Statement submitted by Bhushan, stated, "We expected something better than this. What can be done if he thinks he has done no wrong."

The AG, at this juncture, referred to a contempt case against Bhushan for his remarks about the AG's submissions in the CBI Director case was withdrawn after he expressed regret.

Accordingly, the AG submitted to the Court that this was a case where the Court could take a "compassionate view" and that the same would be appreciated by the Bar and would befit the status of the Court.

The AG further informed the Bench about the several PILs which had been filed by Bhushan for the benefit of people and that the Court should consider his public work.

Justice Mishra responded, "What is the point of giving warnings to Bhushan if he himself has no inkling that he has done wrong. You yourself had filed contempt against him, which was withdrawn only after he expressed regret."

The AG suggested to the Court to take Bhushan's remarks off-the-record and close the case. To this, Justice Mishra said, "How can they be taken off-the-record when Bhushan himself says they are his bonafide belief?"

Justice Gavai too stated that 3 days had been given for expressing apology and Bhushan instead filed a Supplementary Statement.

The AG then invoked the Arundhati Roy case wherein the Supreme Court had observed that "Our shoulders are broad enough to shrug off". Accordingly, he suggested the Court to give one more chance to Bhushan to express regret.

The Bench then perused the Reply Affidavit which had been filed by Bhushan.

Justice Mishra observed, "Can those allegations be construed as defence?"

The AG noted, "If there is an expression of regret, and if the Affidavit is withdrawn, perhaps the case can be dropped?"

To this, Justice Mishra stated, "How can the Affidavit be withdrawn when they insist that it should be considered?"

Justice Mishra noted that a person may have different opinions about a judgement, but the blame could not be attributed to the Judges.

The AG responded that Bhushan had not hesitated to state that he also had the greatest of respect for the Court.

"In 2009 case, he has expressed regret. Likewise, if he expresses regret in this, that should be the end of this unfortunate case".

Justice Mishra : Your advise is welcome. But he should withdraw his allegations.

AG : Yes, he should withdraw his allegations too.#PrashantBhushan #contemptofcourt@pbhushan1 #SupremeCourt

While Justice Mishra welcomed the AG's advice, he remarked that the allegations should be withdrawn. The AG concurred with this, and noted that he could not submit anything further than this as it was for Dhavan and his client (Bhushan) to submit what they wanted.

Accordingly, the Court allowed 30 minutes of time to Dhavan and Bhushan to "think over" the matter and come back with their submissions.

Live Updates from the hearing may be read here


Update at 3:26 PM - SC reserves judgment on sentence. Report of the hearing during the afternoon session may be read here :

'Tells Us What Is Wrong In Using The Word "Apology"': Asks Justice Mishra As SC Reserves Judgment In Prashant Bhushan Contempt Case Over Two Tweets