'We Will Be Reduced To A Minority In Our Home State': More Assam Organisations Move Supreme Court Against CAA 2019[Read Petitions] 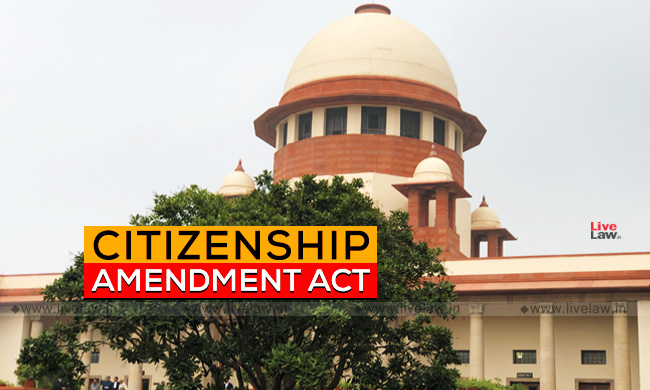 The North East Students' Organisation (NESO), Assam Association of the Deaf (AAD) and the Assam State Unit of the National People's Party (NPP) have filed three separate petitions before the Supreme Court, against the implementation of the Citizenship (Amendment) Act, 2019. At least a dozen Petitions have already been filed in the Supreme Court challenging the new law...

The North East Students' Organisation (NESO), Assam Association of the Deaf (AAD) and the Assam State Unit of the National People's Party (NPP) have filed three separate petitions before the Supreme Court, against the implementation of the Citizenship (Amendment) Act, 2019.

At least a dozen Petitions have already been filed in the Supreme Court challenging the new law which relaxed conditions for acquiring citizenship for non-Muslim migrants from Pakistan, Bangladesh and Afghanistan.

As per the Act Hindus, Sikhs, Buddhists, Parsis, Jains and Christians who migrated to India without travel documents from Pakistan, Bangladesh and Afghanistan on or before December 31, 2014 will not be regarded as illegal migrants.

The common ground taken in all the three pleas is that the Act is in derogation of the rights of the Assamese citizens, as it legalizes the influx of illegal migrants who entered Assam in cloak and dagger after 25.03.1971, without possession of a valid Passport, travel documents or other lawful authority to do so.

The NESO has submitted that the impugned Act, especially Sections 2, 3, 5 and 6 thereof violate the right of the people of the North-East India to conserve and preserve their distinct culture, heritage and traditions, by failing to consider the adverse effect it has on the region which is already burdened with the continuous influx of illegal migrants. Rather, the plea states the Act imposes an unreasonable burden on the states since no budgetary allocation has been made for the illegal migrants expected to take Indian citizenship.

With regards the Act's interplay with international law, it has been alleged the government has failed to protect the rights of the indigenous people of North East as enshrined under the United Nations Declaration on the Rights of Indigenous Peoples.

It has been submitted that before passing the legislation, the State Governments/Union Territory Administrations should have been consulted, in view of the provisions of the Foreigners Act, 1946. Under the said Act, the power to identify and deport a foreign national illegally staying in the country has been vested with the State Governments/Union Territory Administrations.

As per the Petitioner, the impugned Act grants blanket exemptions from the provisions of law governing grant of citizenship to certain religious classes of foreigners, who have entered and/or staying in India without valid documents. This is in violation of the "non-religious" and "secular fabric" of the Constitution, which is contained in the Preamble as well as in Articles 15 and 25 to 27 of the Constitution.

The plea further states that the blanket exemption is not guided by any determinable criteria for identification of persons, who may have been persecuted.

"the impugned Act does not have reasonable classification based on intelligible differentia. The classification based on religion ipso facto violates Article 14 of the Indian Constitution, wherein the legislation effectuate discrimination on the basis of the intrinsic and core identity of the individual i.e., religious identity of the individual," the plea read.

Further, it has been alleged, that the Act does not enjoin a prescribed authority with the power to determine whether and in what manner and to what extent, if at all, such persons of the specified religion are eligible for a special treatment. This is clear cut violation of Article 14 of the Constitution.

The Petitioner then points out that the Amendment Act which amended Sections 2, 3, 5 and 6, is inconsistent with Section 6A of the principal Act inasmuch as, while the latter was inserted to ensure that illegal migrants entering the state of Assam after 25.03.1971 will be deported back to Bangladesh, the former provisions legitimizes the entry and continued stay of "illegal migrants", even if they entered India after 25.03.1971.

The petition has been filed by Advocate T. Mahipal.

The Petitioners herein begin their arguments by citing gross violation of the right to life guaranteed to the people of Assam, in addition to all persons, under Article 21 of the Constitution. It states that the lives and liberty of the Citizens of Assam will be affected adversely by the massive influx of illegal immigrant as citizens of India.

"As a result of this grant of citizenship the indigenous people of Assam will be reduced to a minority in their home State. Their cultural survival will be in jeopardy, their political control will be a weakened and their employment opportunities will be undermined," the plea asserts.

The Petitioners have pointed out that the case relating to influx of illegal immigrants in Assam and other areas of the north-east between 1951 to 1971 was already pending before a Constitution Bench of the Supreme Court. In these circumstances, the government ought not to have introduced the impugned Act, since it only creates haywire and adds burden on the courts.

It has been pleaded that by promulgating the impugned Act, the government has failed to discharge its duty under Article 355 of the Constitution to take all measures for protection of the State and it rather undermines the interest of people of Assam.

Reliance has been placed on Sarbananda Sonowal v. Union of India, (2005) 5 SCC 665, wherein the Supreme Court specifically observed that there can be no manner of doubt that the State of Assam is facing "external aggression and internal disturbance" on account of large scale illegal migration of Bangladeshi nationals.

The Petitioners added that the Act also violates Article 325 and 326 of the Constitution as it dilutes the political rights of the citizens of Assam.

No criteria to ascertain who is persecuted

It has been submitted that a huge number of illegal immigrants from Bangladesh had entered the State of Assam not due to any religious persecution but mainly due to economic reasons. Nonetheless, the impugned Act had not devised any criteria or mechanism to determine or to differentiate between Hindu, Sikh, Buddhist, Jain, Parsi and Christian illegal immigrant who entered into India due to religious persecution or due to other reasons.

The Petitioners have submitted that the impugned Act grants unbridled discretion for "exclusion" of a certain class of persons from the existing legal framework regulating the grant of citizenship of India, without prescribing guidelines/ determinable criteria for identification of such persons, who may have been persecuted.

"the classification made by the impugned Act has no rational nexus with the object it is said to achieve…there are several minority Muslim communities and other communities (including atheists) also in the countries in question which also face discrimination and/ or persecution from the other majority Muslim communities…even the selection of just three countries with a specific state/ majority religion, while leaving out other countries with other state/ majority religions, inter alia like Sri Lanka, Myanmar, China etc. itself fails to withstand the test of a reasonable classification," the plea states.

It has lastly been submitted by the Petitioners that the impugned Act is an attempt to overreach the directions of the Supreme Court in All Assam Sanmilitia Mahasangha v. Union of India, (2015) 3 SCC 1, wherein the Central Government was directed to detect and deport all illegal migrants who had come to the State of Assam after 25.3.1971.

The petitions have been filed by AOR Kaushik Choudhury and represented by Advocate Nicholas Choudhury.