"RTI Disclosures May Affect Independence Of Judiciary": AG Argues For SC In SC's Appeal Before CB Headed By CJI On The Question "Whether CJI's Office A Public Authority" 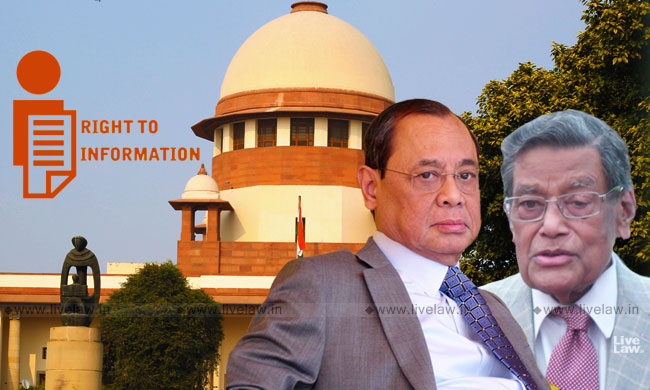 The Supreme Court on Wednesday commenced hearing on its own appeals against the applicability of the RTI Act to the judiciary. One of the cases was the disclosure of the complete correspondence including the note files exchanged between the constitutional authorities regarding the appointments of Justices H. L. Dattu, A. P. Ganguly and R. M. Lodha in supersession of Justices A. P. Shah, A....

The Supreme Court on Wednesday commenced hearing on its own appeals against the applicability of the RTI Act to the judiciary.

One of the cases was the disclosure of the complete correspondence including the note files exchanged between the constitutional authorities regarding the appointments of Justices H. L. Dattu, A. P. Ganguly and R. M. Lodha in supersession of Justices A. P. Shah, A. K. Patnaik and V. K. Gupta, as directed by the Central Information Commission in 2009.

At the outset, Attorney General K. K. Venugopal distinguished the 1981 seven-judge bench authority of S. P. Gupta (on which the CIC had placed heavy reliance in the impugned order), describing it as "very idealistic".

"There is no reference at all, except in passing, to the right to know. The basis for this actually is Article 19(1)(a) and it has not been referred to at all. Today, it has been held to be the source of the right to know in Aadhaar and a series of other judgments. Therefore, once the Article is attracted, it carries the restrictions in 19(2). Restrictions can be placed on the right to know by a law. That law is in existence since 2005 (the Right to Information Act) and it sets out as to what would be the rights to information and what would be the restrictions on that right. A totally new environment has come into existence by passing this law which invokes the constitutional provisions...", he explained.

Pointing out that there was no law at all back in 1981 when the judgment in S. P. Gupta was rendered, the AG was of the view that on the ground of there being no reference to Article 19(1)(a) alone, the decision could not be applied to the case at hand, considering that the RTI Act has not taken over.

"There are practices outside the Act which have to be taken into account because of certain constitutional provisions- the independence of the judiciary. Look at the impact of the collegium recommending certain judges to be appointed overlooking the seniority of certain other judges- Without giving reasons, overlook judge 'A' who is 4-5 years senior to 'B' or 'C'?"

"The only grounds available to the government as a defence against disclosure (in S. P. Gupta) were Article 74(2) and section 123 (of the Evidence Act). In respect of the former, they said that the documents in question are not which go to the President from the Cabinet but those which go up and down between the Law Minister, the CJI, the state government and the Chief Justice of the high court. As for section 123, it was said that the privilege cannot be a protection against a class of documents...but so far as reputation is concerned, they seem to accept that S. N. Kumar had asked for it at his own risk and requested for the adverse matters to be placed in public domain. The other judges also said that There has to be a balancing of public interest in deciding whether non-disclosure should succeed...74(2) is one defence which even I would not change today. 123 is now converted into the exemptions in 8(1) (of the RTI Act)...It is purely on SP Gupta that the CIC has acted", he elaborated.

"If you applied the judgment before the RTI Act had come in, the applications would be dismissed. No third party application could be allowed as to what has been recommended by the Central government or the CJI or the state government or the Chief Justice of the High Court. If The RTI Act had not been enacted, these applications would have been thrown out. It is only the person in whose case a report is submitted who alone can ask for it. He does it at his own risk. The underlying key is that without the person's certification, his personal information has to be protected but it is open to him to throw away the protection. It is an implicit acceptance of the provisions of the present Act as to the exemption of personal information. That cannot be disclosed and this is what the 7 judges have also said"

"What is missing in S. P. Gupta is that these disclosures would affect the independence of the judiciary. They never thought of it despite it being a part of the Basic Structure. Even in deciding under this Act, Your Lordships must also look into the provisions of the Constitution, as to whether these provisions would militate against an interpretation which would then defeat the protection of the constitution...

"The exceptions under Section 8 and the main provisions in Section 3 (of the RTI Act) have to be tailored to be consistent with the actual Constitution and its necessary implication as to the judiciary. Else, they could be ultra vires the Constitution...Suppose it is expressly stated that don't look into the independence of the judiciary to decide the scope of the provisions and, without any reference to the constitutional ideal, decide as to the disclosure of appointment, transfer etc, I would say it is ultra vires. Many Acts, like the Official Secrets Act, prohibit disclosure. If an application is made under the RTI, then this Act sets out the extent to which this prohibition can be ignored. There will be many many other prohibitions under the Patent Acts etc..."

So far as the judgment of the seven judges (SP Gupat) is concerned, today in changing times and with a new environment and new provisions, that judgment is history and has no application and is wholly distinguishable", argued the top law officer of the country.

Moving on, referring to the definition of 'information' in section 2(f) of the RTI Act, he submitted, "'Information' is what is already in existence in the final form in which its disclosure is being sought. It should exist as a document or a memo or an email, etc.

"And I say this because some of the judges may have submitted the data as to their assets and some have not. Is it open to a third party to seek information regarding what the assets are?He is not asking for some existing documents but for the final publication of all the assets, in which case the liabilities and the loans also have to be disclosed. And then an auditor needs to work on them for the final result. It needs an exercise to be undertaken in taking note of all that he has, all that he owns and then his liabilities. 'Information' must be existing in a physical form- it could even be a record like a sale deed, but there are no existing documents as to the assets of a person"

Relying on clauses (i) and (j) defining 'record' and the 'right to information', he reiterated that 'information' would mean what is in existence in a physical form, nothing to be completed or collated for the total result to be obtained.

At this point, Chief Justice Ranjan Gogoi inquired, "what about those who have already submitted (a declaration of) their assets?"

"Subject to other grounds, that would be 'information'. But In this case, what the respondent has sought are not the contents of what has been submitted but who are the judges who have made the declaration. Your Lordships have already put it up on the website that 8 judges have submitted. There may be many others but it is not on the website. Who all have made the declaration is a piece of information which may not affect the personal aspects of the individuals concerned", replied the AG.