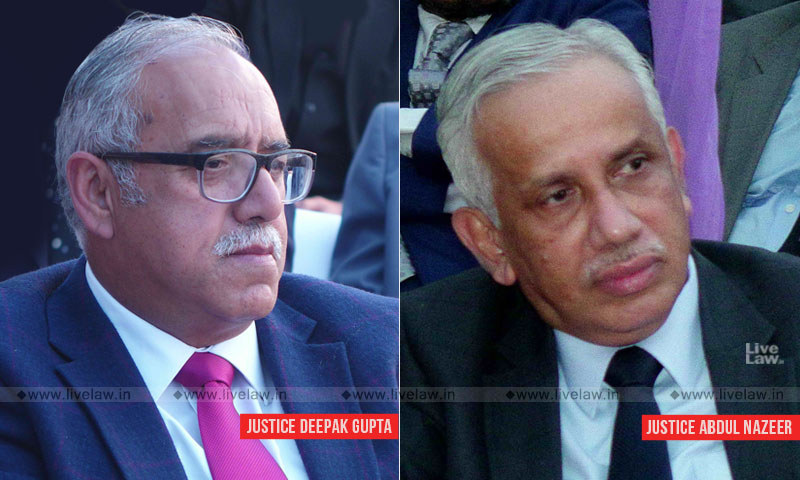 The Supreme Court has observed that a writ of habeas corpus cannot be invoked for granting plea seeking premature release of a convicted prisoner.

The bench of Justices S. Abdul Nazeer and Deepak Gupta observed that it is not for the writ court to decide whether a prisoner is entitled to parole or remission and these matters lie squarely in the domain of the Government.

The Court was considering appeals against the Madras High Court orders which had allowed Habeas Corpus writ petitions filed by prisoners convicted and sentenced for life imprisonment in murder cases. The petitions for habeas corpus were filed on the ground that the State has not given benefit of the premature release referred to above to the petitioners whereas many others have been given the benefit.

The bench observed that the grant of remission or parole is not a right vested with the prisoner.It said:

"It is a privilege available to the prisoner on fulfilling certain conditions. This is a discretionary power which has to be exercised by the authorities conferred with such powers under the relevant rules/regulations. The court cannot exercise these powers though once the powers are exercised, the Court may hold that the exercise of powers is not in accordance with rules."

The Court added that the High Court ought not to have directed the release of the detenu forthwith without first directing the competent authority to take a decision in the matter. It added

"This order would be more in the nature of a writ of mandamus directing the State to perform its duty under the Scheme. The authorities must pass a reasoned order in case they refuse to grant benefit under the Scheme. Once a reasoned order is passed then obviously the detenu has a right to challenge that order but that again would not be a writ of habeas corpus but would be more in the nature of a writ of certiorari. In such cases, where reasoned orders have been passed the High Court may call for the record of the case, examine the same and after examining the same in the context of the parameters of the Scheme decide whether the order rejecting the prayer for premature release is justified or not. If it comes to the conclusion that the order is not a proper order then obviously it can direct the release of the prisoner by giving him the benefit of the Scheme. There may be cases where the State may not pass any order on the representation of the petitioner for releasing him in terms of the G.O.(Ms) No.64 dated 01.02.2018 despite the orders of the Court. If no orders have been passed and there is no explanation for the delay then the Court would be justified in again calling for the record of the case and examining the same in terms of the policy and then passing the orders.

The bench, however, invoked Article 142 and ordered the release of prisoners in some appeals.