[Yatin Oza Contempt] "We Can Agree To Disagree, But Discourse Must Be Palatable; Even Lord Krishna Forgave only 100 Mistakes": Justice Kaul 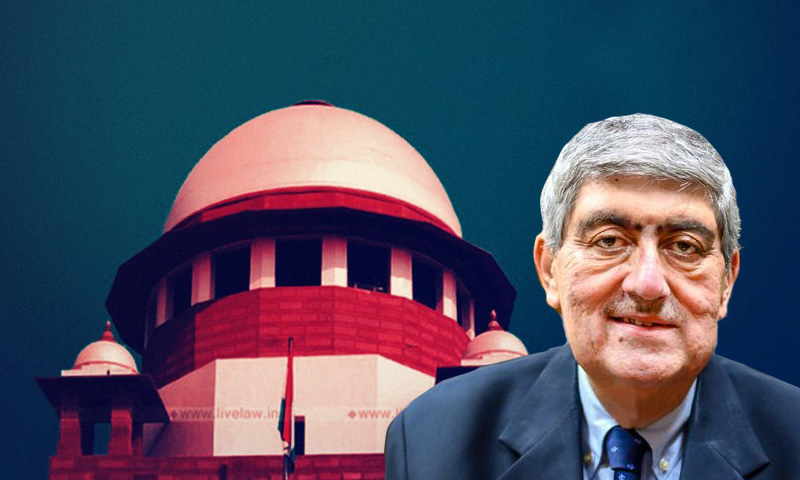 Orally hinting that a reasonable settlement may be arrived at, the Supreme Court on Tuesday deferred to November 5 the hearing in the matter of Yatin Oza's contempt.The bench of Justices S. K. Kaul and Dinesh Maheshwari heard the matter.Senior Advocate C. A. Sundaram, appearing for the GHCAA in the intervention application, advanced that "whenever a senior advocate is de-designated, it...

Orally hinting that a reasonable settlement may be arrived at, the Supreme Court on Tuesday deferred to November 5 the hearing in the matter of Yatin Oza's contempt.

The bench of Justices S. K. Kaul and Dinesh Maheshwari heard the matter.

Senior Advocate C. A. Sundaram, appearing for the GHCAA in the intervention application, advanced that "whenever a senior advocate is de-designated, it affects the bar at large and not just the one person. Every single person so designated or aspiring to be so designated is affected"

"Second is the issue of when public utterances outside the court can be said to be a reflection on the manner of judges' functioning? Criticism of the judiciary- when can it be contempt? This impacts the bar at large...the judiciary itself functioning administratively may be open to a certain view", he advanced, expressing a desire to be heard on these aspects..

"This is a matter where everybody will jump on the bandwagon and then it will be an unending exercise. It has happened before the HC and before us too, where different viewpoints were expressed by different people...your application is before us. We'll see...as of now, we are not inclined to pass any orders of dismissal or issue of notice...otherwise, there will be 101 different pieces, you are aware. The hearing will become impossible", remarked Justice S. K. Kaul.

"We have no desire to expand the matter. The GHCAA only says that should the matter enter into those aspects, it wants to be heard. It is the Association's first endeavour to resolve the matter", assured Mr. Sundaram.

"If there are 'x' number of people who say that, then there will be 'y' number of people who think otherwise...there will be different views at the bar as to what should be done...he (Oza) not only commented on the system but also the jurisdiction of the court more than once. That is why the judges acted how they did...now how should the SC step aside these issues as judges?", observed Justice Kaul.

As Senior Advocate Arvind Datar, appearing for Oza, sought to be heard on merits, the bench remarked that at this stage it is only inclined to issue notice- "whatever sentence there is, it is itself arising out of the court...so there is no question of anything happening now", remarked Justice Kaul, even as advocate Nikhil Goel pointed out that the High Court has itself suspended the sentence for 60 days.

Next, Senior Advocate K V. Vishwanathan, appearing for the GHCAA in the writ petition, indicated the August 6 order of the top court- "Although Your Lordships said that the brief has been exceeded, the role of the petitioner was acknowledged...ultimately, he took up the Association's cause which landed him in this"

"Your Lordships said it is not capable of resolution", he pressed, urging that they be heard, assuring the bench that there would be no repetition. Justice Kaul assured that the matter is not that complex and that they are inclined to issue notice.

Next, Senior Counsel Dushyant Dave appeared for his "parent HC association" advanced, "I state at the outset that one cannot find fault with the HC judgment. But considering that an unconditional apology has been tendered, I would only urge that the court find some solution"

"That is the endeavour, whether it began earlier or later...as a person who has been the CJ of two HCs, I can say it is difficult to get unanimity between two Courts...this is not just about debating the issue...this is not just a one-event issue but something troubled the court repeatedly....the bench emerges from the bar- at least 2/3rd of it does, the rest come from judicial services....this is an opportunity for both sides to see their functioning...we may be at fault too, the problem may be from the bar or from the bench...but normally, we can create a balance...", noted the Judge.

"I am getting complaints from AORs everyday that while their matters are not being listed, others' are! Mr. Oza had intervened on that account!", pressed Mr. Dave.

"These are unusual times. They are difficult for everybody. Earlier, even holding a hearing was found to be difficult before this court. Now some systems, as in the Delhi HC, are being found better...we are all in the process of learning...world over people are learning...but in this unnatural environment, the patience of the people is running out, there are also mental health issues, what with people being confined...we can agree to disagree, but the discourse, the expression of a different view should be palatable, the language should be acceptable", observed Justice Kaul.

"I accept that he may have made mistakes in the past, but an unconditional apology means a lot! There can't be a greater punishment than the humiliation he has undergone in the past few months! I request Your Lordships to please take a wider view of the matter!", urged Mr. Dave.

"Discourse in every field, not just the legal field, has become aggravating...people should learn from what has happened, so that views can be expressed in a palatable manner...there may be differences, but the judiciary and the bar work together...I have spent as many years on the bench as in the bar, but you don't forget your years at the bar...we will work out something", assured Justice Kaul.

"I have immense faith in Your Lordships", said Mr. Dave.

"The man has learnt a lesson like never before, the man has been humiliated like never before! Irrespective of everything, he is not justifying anything and only wishes to put things in context...the issue is not of this side of the bar or that side of the bench, but of putting a man down in his place permanently! Your Lordships are aware of the extreme death penalty nature of the punishment", began Senior Counsel A. M. Singhvi.

"But the HC must have felt very strongly...", remarked Justice Kaul.

"And rightly so! But Your Lordships can take care of the larger interest, view the larger perspective...that is the difference between the SC and the HC", pressed Dr. Singhvi.

"Keeping that in mind, we hope to arrive at a settlement. but please set aside the shoes you adorn at the moment and see our perspective, as we are doing for you", noted Justice Kaul.

"De-designation has happened before. But for how long is a separate issue", remarked the judge.

"Then Your Lordship may treat the hearing as concluded. We leave it you to determine the larger interest of the bar and the bench", said Mr. Dave.

"We appreciate your faith but this will be a burden on us. We can sort things out together", said Justice Kaul.

"It is not in the interest of the institution to go in to the matter', said Mr. Dave.

"You are right. So give us a solution to the problem. Please accept your responsibility for your parent HC both on the side of the bar and the bench...We appreciate your stand. We appreciate all the senior counsel before us for seeing the right perspective in this situation, and not as us versus them", remarked Justice Kaul.

"I have an additional reason also...my father used to be on that bench", added Mr. Dave.

"I remember...So We have 5 eminent senior counsel before us...With your experience and ours too, we will be able to resolve this...with your assistance, we can arrive at a reasonable solution, protecting the dignity of the HC at the same time", assured Justice Kaul.

"Taking a cue from Your Lordships' sentiments, the HC didn't implement the sentence..it has been kept in abeyance", pointed out Mr. Vishwanathan.

Mr. Datar tried to make submission on Oza' s comments as regards the registry's functioning, reiterating that the court had just said these are difficult times.

"HCs have a more closer-knit system, considering the bar and the bench are from the group...like I said, it is difficult to get unanimity between two courts...even after we expressed our sentiments, the HC went this far. So there has to be something more to what happened, and repeatedly so....The HC can't be asked to get its system in order....Mr. Dave also said the boundary has been crossed too many times. We give credit to Mr. Dave to say that something has happened...."

"I, being the President of the Bar, cannot give too many suggestion as it will be self-incriminating....But may I say that both your Lordships, Justice Kaul and Justice Maheshwari command universal respect at the bar...as the President of the bar, I would like to express the admiration and the gratitude of the bar for your Lordships' respect to the bar", said Mr. Dave.

Finally, the matter was adjourned to November 5.