A Tribute To Ever Remembering ‘MKD’ 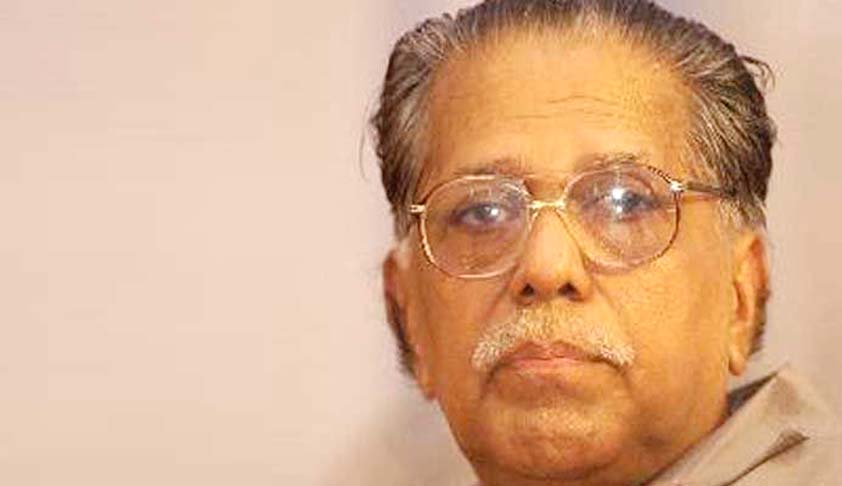 Liked by all and hated by none- that is Adv.Muthalarath Kurungodan Damodaran (M.K.Damodaran), popularly known as ‘ MKD ’ among lawyers and ‘Damuvettan’ to close friends.  Adv. M.K.Damodaran’s sad  demise,  indeed, has caused a great loss of a senior lawyer  of his stature who had a social agenda throughout  in his life. When death of near and dear occurs we console ourselves...

Liked by all and hated by none- that is Adv.Muthalarath Kurungodan Damodaran (M.K.Damodaran), popularly known as ‘ MKD ’ among lawyers and ‘Damuvettan’ to close friends.  Adv. M.K.Damodaran’s sad  demise,  indeed, has caused a great loss of a senior lawyer  of his stature who had a social agenda throughout  in his life. When death of near and dear occurs we console ourselves that this world is the land of the dying; the next is the land of the living.

Mr.M.K.Damodaran’s humble beginning at Thalasserry courts had reached him to the highest post of Advocate General of the  state.  He was really a leader of lawyers who always stood for all genuine causes of legal fraternity. He espoused the cause of the lawyers steadfastly without any slightest compromise. He had an  indomitable courage to stand up and fight for a legal cause.  Mr.Damodaoran spent one fourth of his legal career at Thalasserry (Formerly known as Tellicherry), a place  known as the Centre of Judicial Excellence.  Mr.Damodaran went on to become one of the most respected and socially active Senior Counsels at High Court of Kerala, having continued to appear in many high profile cases till his death.  He played a very instrumental role in fulfilling the long cherished ambition of a Chamber Complex for the members of Kerala High Court Advocates’ Association despite all other obstacles.

Mr.Damodoaran was considered to be one of the strongest legal pillars of left wing politics in the state.  More recently,  when he was  chosen to appoint  as Legal Advisor to the Chief Minister as his most trusted crony, Mr.Damodaran gracefully declined to accept the same when it became a controversy.  An absolutely down to earth person approachable to all, although he was one of the most towering legal personalities in the state.

He was born in a small village by name Kodiyeri, near Thalasserry.  His father Sankaran Nair was a peon at Govt.Brennan Training College,Thalasserry and mother Madhavi Amma was a home maker.  He completed his early school education at Oniyan School,Kodiyeri and  at Govt.Brennan High School,Chirakkara, Thalasserry. After passing degree at Govt.Brennan College,Dharmadam, he took law degree from Govt.Law College,Ernakulam. To begin with, he was in the chamber Adv.A.V.K.Nair, an eminent criminal lawyer at Thalasserry Courts.  After spending a few years in the office of Mr.A.V.K.Nair, Mr.Damodaran joined  in the office of Mr.K.M.Namboothirippad, a doyen in civil law of that time.  He acquired reputation for  a thorough  and meticulous  preparation of  cases and absolute fairness. He appeared in  number of criminal cases at Thalasserry Courts and at  various other courts in the state and defended the cases of labourers, peasants and  also  for accused in many other political murder cases. During his five decade more long career as lawyer, he could earn the esteem and affection of the members of Bar and Bench in abundance and became one of the leading figures in the legal field.

When I was appointed as the Director General of Prosecution and State Prosecutor in the High Court of Kerala in July 2011, Mr.Damodaran had called  and felicitated me and had  promised  me all co-operation and support as one of  his close friends. During my five years tenure as State Prosecutor I had to represent the state in many  highly sensational cases in which Mr.Damodaran appeared in opposite side. He was very cordial and  friendly to his  opposite counsels and legal battle waged inside court halls would never reflect in  his personal relationships with his legal adversaries. He fought without anger and malice for winning his cases. Our relationship was verily touching marked by mutual respect and true friendship.

Mr.Damodaran was very friendly in his approach to courts while appearing before any judicial forums.  The way of approach of ‘MKD style’  in criminal trials is very familiar to lawyer community. He would conquer the hearts and minds  of the judges  and also the opposite counsels with his humble and polite approach and behaviour to them. Mr.Damodaran’s court crafting is well known among advocates and judges.  I recall an incident in Addl.Sessions Court No.1,Thalasserry in 1983, where he had to confront in a most temperate and  submissive manner with a presiding judge in a highly sensational political murder case.  When Mr.Damodaran started to cross examine a prime eye witness, the judge objected to  the questions stating that those are irrelevant and unnecessary and they are nothing but a  mere wastage  of judicial time.   Apart from objecting Mr.Damodaran’s questions, the judge went on to put ever so many questions to  the witness by invoking the discretionary power vested in him as judge  under Sect.165 of the Indian Evidence Act, so as to clear all ambiguities in the oral testimony of the witness.  Mr.Damodaran  by exercising extreme self restraint in that tense  atmosphere in the court hall which was jam-packed with leaders of two rival factions, made a submission  to court in a most polite manner and said that “ my questions may be irrelevant as your honour observed, but if I am not  putting these questions to the witness and when the matter reaches in Appellate Court tomorrow, the Appellate judge may ask, which fool cross examined this witness; in order to avoid such  questions of the Appellate judge, I may be permitted to put  my questions”.  The highly intemperate and recalcitrant judge suddenly cooled down and said that ‘you can ask as many questions of your  choice, I would not object’. That was the manner in which Mr.Damodaran dealt with aggressive judges.

It is worth mentioning the words of the great English novelist George Eliot that “Our dead are never dead until we have forgotten them”.  I am sure that  Mr.M.K.Damodaran will be ever remembered in the annals of Kerala’s legal history as a lawyer who used the law for the protection of weak against the strong. May  his soul rest in peace.