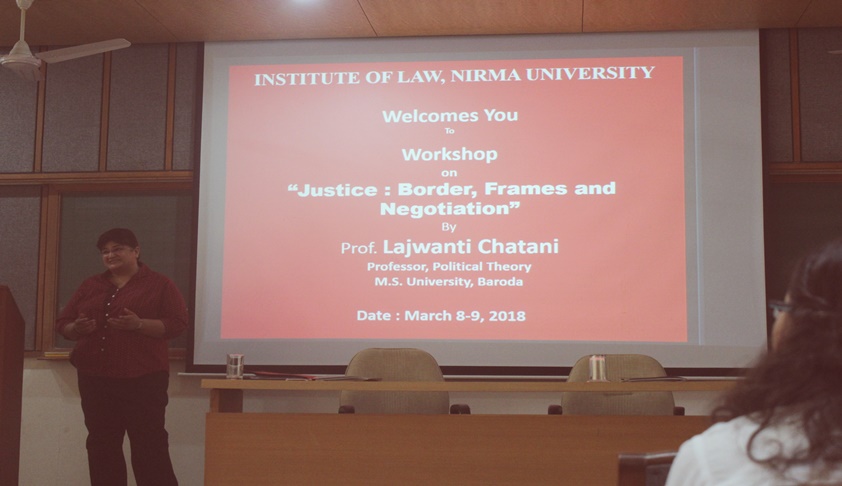 Institute of Law, Nirma University, conducted a two-day workshop on ‘Justice: Border, Frames, and Negotiations’ on Thursday and Friday, whose aim is to nurture young minds with the imperatives of justice.

Under the aegis of Prof. Lajwanti Chatani (Professor, Political Theory), MS University, Baroda, the workshop started with the simple question ‘What is Justice?’. After hearing amiable answers from students, Prof. Lajwanti uttered the simple meaning of justice as ‘Giving to each what is due’, from which it means that the person should not be escaped from the prerogative to what it is entitled.

Addressing the gathering, Prof. Lajwanti further explained the evolution of the theory of justice, which was set out by Greek philosopher Plato in his work, ‘The Republic’. The theory possesses the question of conflict as when the person seeks justice for the injustices done to it, there will be a situation in which its claim for justice will give birth to conflict. The professor also discussed justice relation with morality, which according to her, is justice concerns coercive institutions (state), while the morality concerns a larger subset of human conduct.

In the next part of the lecture, she explained Rawls theory of distributive justice system, which says that every resource that the society has should be just, fairly, and reasonably distributed among all sections of the society.

Post lunch, Prof Lajwanti continued the discussion on three ways to look at the question of justice. She elaborated that justice deal with three issues, namely representation, redistribution and recognition. She discussed theories of various thinkers like Plato, Locke, Marx, and Rawls in the above context.

After this, the session was carried forward by the presentations of students.