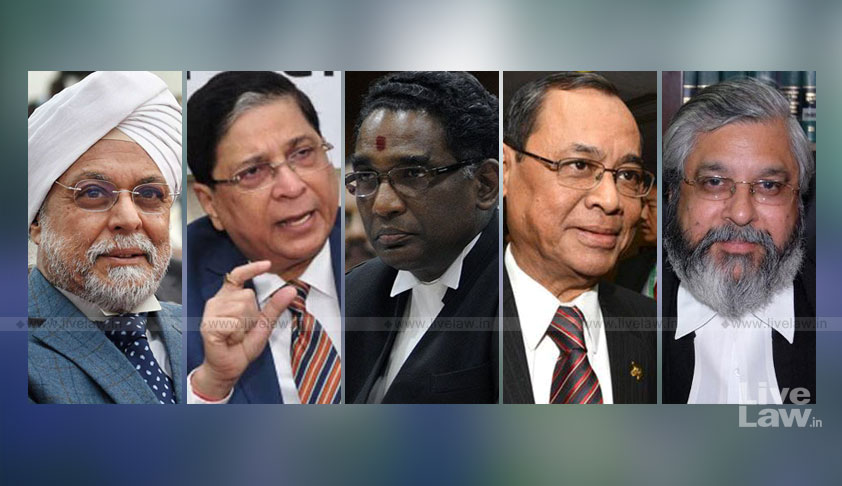 In our democracy, the final judges will be laymen like me, and all the millions like me, who don’t read that Constitution regularly, who don’t study all the interpretations of it and who may not even understand everything it says. We’ll be the judges of the effectiveness of the Constitution and the wisdom of the laws written under it and the integrity of your profession - Lee Iacocca

It was November 1996 when Chief  Justice P.N.Bhagwati made a momentous statement in his Law Day address, "I am pained to observe that the judicial system in the country is almost on the verge of collapse. These are strong words I am using but it is with considerable anguish that I say so. Our judicial system is creaking under the weight of arrears."

On 27th  August  2017, as the newly realigned collegium of consisting of Chief Justice Dipak Misra, Justice Jasti Chelameswar, Justice Ranjan Gogoi, Justice Madan Lokur and Justice Kurian Joseph is poised to take over there is no cause for such alarm. But the Law Ministry’s Vacancy Statement July 2017 is certainly a cause for grave concern. Any vacancy on the bench is a strain on the judicial system which is to deal with the massive volumes pending an fresh cases.

The lockjam on the contentious issue of the Memorandum of Procedure (MOP) which has stretched itself out for over 2 years is one significant reason for the vacancies.

MOP was a device adopted in the Second Judges case for effective implementation of the judgement. The Supreme Court vide its order dated December 16, 2015 in the SC Advocates-on Record case gave directions to the government to “ finalise the existing memorandum of procedure by supplementing it in consultation with the Chief Justice of India”. The MOP had to deal with the critical areas of a) eligibility criteria, b) transparency in the appointments process, c) secretariat, d) complaints and f) miscellaneous.

But the government  incorporating the ‘national security  clause’ is a surprise element in the MOP. It is difficult to find in the history of judicial appointments a necessity for such a clause.  In March 2017, the collegium headed by Chief Justice J.S.Khehar had spelt out the Supreme Court’s objections. While conceding that the inputs of the government with regard to sensitive feedback would be welcome, it did not approve of a virtual veto under the said clause: “But the government cannot be given a virtual veto to reject any name by merely invoking national security. This would result in politicisation of the appointments process, something which the framers of the Constitution didn’t want.”

However, there is one  significant issue which is not being addressed in the MOP,  nor has it gained the attention of  the collegium and the government. There is the  long-standing demand to select  candidates from a wider talent pool  of lawyers.   United Kingdom has the option of applying for judgeship. A case in point is UK’s new lord Chief Justice Sir Ian Burnett who had applied for the position. One of the fears perhaps maybe the splurge of applications which is deterring this particular option.

The sooner the  resolution on the MOP the better The judicial system urgently requires adequate working strength to meet the mounting arrears. It is the constitutionally mandated responsibility of the government of the day for the effective administration of justice. As  Lee Iaccoca pithily said that it is the laymen who will ultimately be the judges of our judicial system.

He is the author of  the books

[The opinions expressed in this article are the personal opinions of the author. The facts and opinions appearing in the article do not reflect the views of LiveLaw and LiveLaw does not assume any responsibility or liability for the same].
TagsChief  Justice P.N.Bhagwati High Courts MoP National Security clause Second Judges case
Next Story
Similar Posts
+ View more
Law Firms
+ More