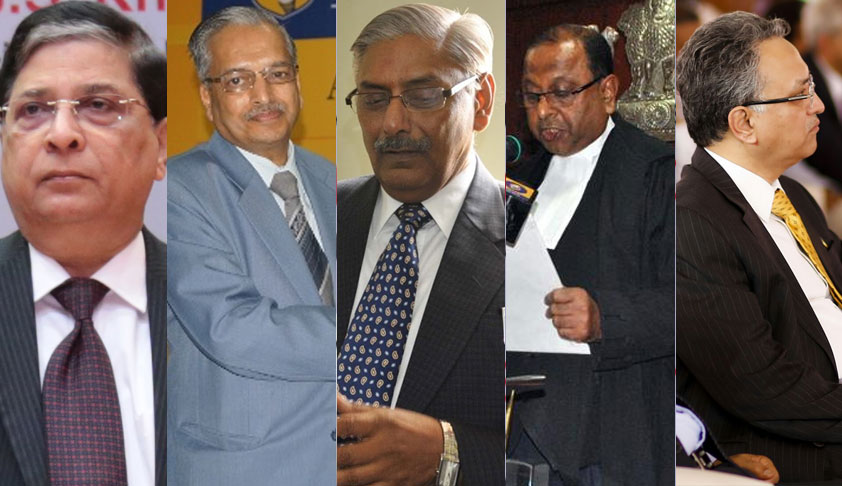 A huge drama broke out before the constitution bench of the Supreme Court at 3PM today when the writ petition filed by the Campaign for Judicial Accountability and Reforms pertaining to the medical admission scam and the bribery allegations against members of the higher judiciary was urgently heard.The Five Judges Bench comprising Chief Justice Dipak Misra and Justices RK Agarwal, Arun...

A huge drama broke out before the constitution bench of the Supreme Court at 3PM today when the writ petition filed by the Campaign for Judicial Accountability and Reforms pertaining to the medical admission scam and the bribery allegations against members of the higher judiciary was urgently heard.

The Supreme Court bench of Justices J.Chelameswar and S.Abdul Nazeer on Thursday referred a petition filed by advocate Kamini Jaiswal, seeking fair and independent investigation into the allegations of bribery to settle a pending case, to a Constitution bench of five senior-most Judges of the Supreme Court, to hear it on Monday,

The Supreme Court Bar Association, who was allowed to be impleaded in the matter, represented through its President, Senior Advocate Mr. R. A. Suri and Secretary, Advocate Mr. Gaurav Bhatia, challenged the orders of the division bench of Justices Chelameswar and Abdul Nazeer in directing a like petition by Advocate Kamini Jaiswal to be placed before the Constitution bench comprising of Five Senior most Judges of Supreme Court..

“This is forum shopping. It will bring this court grave disrespect to hear this matter like this. Getting favourable orders by terrorism is not to be encouraged”, the SCBA’s office-bearers said.

“Lodging of FIR against a sitting judge is not foreseen in the Constitution. The protocol is to approach the administrative superior in an event of criminal charges being leveled against a judge which, in the case of a district judge would be the High Court, in respect of a High Court judge would be the Supreme Court, for a Supreme Court judge, the Chief Justice of India and where charges are leveled against the Chief Justice, the President of India.”

“Filing of such a petition on the judicial side is per se contempt. Are we going to place the judiciary at the disposal of the Special Investigation team?”

“You are the lords and the masters of the court and of the country, I do not need to be heard.”

He questioned the authority of CJI,  Dipak Misra to constitute an appropriate bench to hear the present petition as the impugned FIR has its origin in a writ petition which was heard and disposed of by  the bench led by the Chief Justice.

Though Prashant Bhushan tried to argue further, he was interrupted by lawyers supporting the Chief Justice. Then Bhushan stormed out of the court in protest.

The SCBA supported the authority of the Chief Justice, to hear the matter.  In support of this argument, the judgment in State of Rajasthan v. Prakash Chand and others [(1998) 1 SCC 1] was cited –

“That the administrative control of the High Court vests in the Chief Justice alone. On the judicial side, however, he is only the first amongst the equals. That no Judge or Judges can give directions to the Registry for listing any case before him or them which runs counter to the directions given by the Chief Justice.”

Further, Order VI Rule 2 of the Supreme Court Rules, 2013 was relied upon-

“Where in the course of the hearing of any cause, appeal or other proceeding, the Bench considers that the matter should be dealt with by a larger Bench, it shall refer the matter to the Chief Justice, who shall thereupon constitute such a Bench for the hearing of it.”

The Constitution bench then proceeded to annul the order of the division bench, tagging the present petition with Kamini Jaiswal’s petition, to be listed  for placing before an appropriate bench.

WHAT HAPPENED BEFORE THE TWO JUDGE BENCH TODAY?

It was the turn of another bench of the Supreme Court at Court No.6, to express its pain and anguish over the petitions seeking its intervention to ensure fair and impartial probe into allegations of bribery of SC Judges in a pending case.  But it did so for the reason that the petitioners rushed to mention it before another bench and get it heard, before its turn came to hear it.

Justices A.K.Sikri and Ashok Bhushan who heard the petition filed by Campaign for Judicial Accountability and Reforms (CJAR) with the prayer to set up a Special Investigation Team (SIT) headed by a former Chief Justice of India, to probe the allegations, asked what was the urgency to file and mention the same matter, before another bench, when the matter was listed to be heard today by them.

The bench agreed that the matter is serious, and there is no doubt about that.  “We as Judges that too of Supreme Court have the duty to protect the Constitution”, the bench said, and asked why the petitioners could not have waited till today, instead of another petitioner (Kamini Jaiswal)  urgently seeking the intervention of another bench (of Justices Chelameswar and Nazeer on Thursday) in the meantime, with similar prayers.

Prashant Bhushan, representing the CJAR, said, it pained him also.

Prashant Bhushan told the bench: “The connected matter is listed before five senior-most Judges.  What more can be done?  Your lordship is also going to be part of the bench.”

To this, Justice Sikri said:  “I am not on that.  Even today, I can recuse. I am on principle.”

Prashant Bhushan then said there are two important considerations in this case.

Justice Sikri said on merits, the bench is equally concerned.

Then the  bench tagged the matter along with the main petition, filed by Kamini Jaiswal, to be heard on November 13.

When the Supreme Court Bar Association (SCBA) wanted to implead itself in the case through an oral request by its president, R.S.Suri, the bench allowed the impleadment.

When Justice Sikri countered Prashant Bhushan that he could not say that the CJI could not have been requested to list the case, Prashant Bhushan said he could have done it, but he was sitting in the Constitution Bench, and all the mentioning, when the CB hearings take place, ought to be done at Court No.2.