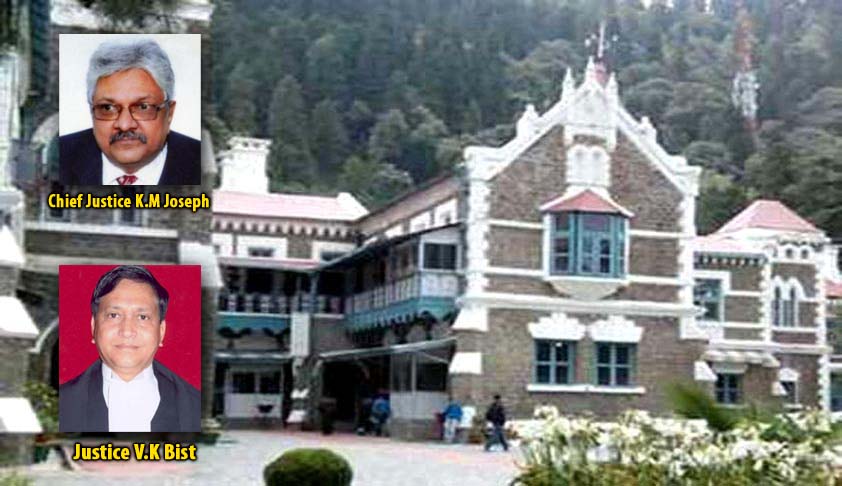 The High Court of Uttarakhand on Thursday set aside the Presidents Rule imposed in the State and ordered for a floor test, to be conducted on April 29. “In the present case…article 356 (imposition of President’s rule) has been imposed contrary to the law laid down by the apex court…The status quo of State government is restored …The government would go under go floor test on...

The High Court of Uttarakhand on Thursday set aside the Presidents Rule imposed in the State and ordered for a floor test, to be conducted on April 29. “In the present case…article 356 (imposition of President’s rule) has been imposed contrary to the law laid down by the apex court…The status quo of State government is restored …The government would go under go floor test on March 29,” the division Bench comprising Chief Justice K.M. Joseph and Justice V.K. Bist observed.

Allowing the petition filed by former Chief Minister Harish Rawat, the Court observed that it was “pained” that the Government of India was behaving in this fashion and not clarifying whether it can keep the revocation on hold. It further observed that the nine dissident Congress MLAs have to pay the price of committing “Constitutional sin” of defection by being disqualified. It then restored Mr. Rawat’s position as the Chief Minister as on March 27.

"The soul of the matter is whether it is open to the Central government to get rid of state governments, supplant or uproot the democratically- elected government, introduce chaos, undermine confidence of the little man who stands with a white paper to cast his vote braving the snow, heat and rain.
"We are of the view that be it suspension or dissolution, the effect is toppling of a democratically- elected government. It breeds cynicism in the hearts of citizens who participate in the democratic system and also undermines democracy and foundation of federalism," said the Bench.

The High Court had made it clear on Wednesday that the Centre’s decision imposing Presidential Rule in the State is open to judicial review. “There is no king or absolutism. Howsoever high you are, the law is above you. Legitimacy of relevant inference drawn from the material that is placed before President is open to judicial review,” a bench comprising Chief Justice K.M. Joseph and Justice V.K. Bist was quoted as saying.

The Bench had further issued a covert warning to the Centre, hoping it will not “provoke” the Court by revoking the Central rule in the state before the validity of its imposition is ascertained by a verdict of the Court.

The Court’s response came on Senior Advocate Abhishek Manu Singhvi’s apprehension that Presidents Rule might be revoked before verdict is pronounced or even reserved. Representing the petitioner, Mr. Singhvi had expressed concern after the Centre submitted before the Court that the Attorney General’s statement of April 7, that nothing with regard to 356 will be done till April 17, has “expired”. He told the Court that the Centre cannot resort to such tactics to force the court to deliver a verdict quickly.

“What the Speaker would do on March 27 could not have been divined by the Cabinet on March 26. Assuming that they did divine, it was entirely irrelevant, for the central government to take that decision (to impose President’s rule) because then it would mean that the central government would be accused to be involved in politics,” the bench said, adding “…whether it is Congress or BJP, it is immaterial for us”.

During the hearing, the Court had noted that Governor’s report to the President clearly indicated towards a floor test on March 28. It further noted that the report did not mention that 35 MLAs sought division of votes. It was therefore of the view that there was “absolute absence of material that would create an apprehension in the mind of the Governor” that President's rule needs to be imposed. The Government however defended their stand, submitting that on March 19, the Governor did not have all the details.

Furthermore, the Bench observed that, “People can go wrong, be it the President or the judges,” in response to the Centre’s submission that the decision for imposition of Presidents Rule was taken by the President in his “political wisdom”. The Centre further contended that the President’s understanding on the reasons for imposition would be different from that of the Court.

The Court had also taken a “serious view” of the allegations levied against the Speaker of the House for keeping the disqualification complaint against BJP MLA Bhim Lal Arya pending, even though the complaint was filed only after the Presidents Rule was imposed.

“Why was the complaint filed on April 5 after President's Rule was imposed? We were thinking about why the Speaker has double standards (that he disqualified the nine rebel Congress MLAs but kept the complaint against Arya pending). This is terrible. You are making such terrible allegations (against Speaker). Is this how Government of India functions? What do you (Centre) have to say about this? This is not to be taken lightly as that (Speaker's conduct regarding disqualification) was also the basis of President's satisfaction. We are taking a serious note of this,” it was quoted as saying.

As per a DNA Report, the Court also made reference to a sting operation which showed the petitioner’s involvement in horse-trading. “Looking at your (petitioner) conduct, why discretion (of imposing 356) should not be exercised?” the Bench had asked. Mr. Singhvi had however referred to the sting as an “alleged solitary example” which “bordered on entrapment”. He submitted that Article 356 cannot be the “panacea” for horse-trading.

He further argued that the Centre’s “concept of auto-falling of a government if money bill fails” does not exist, and a motion of no-confidence would have to be moved to remove the Government. He hence contended that Article 356 was imposed in a “casual manner” in the case at hand, without waiting for the floor test which was scheduled to be held on March 28.

When enquired about the fate of the Centre’s March 30 ordinance regarding expenditure of the state if Mr. Rawat’s plea is allowed, Mr. Singhvi had submitted that the ordinance would remain in force till the petition is allowed. He had also said that if the ordinance is struck down by the court the actions taken under it will remain.