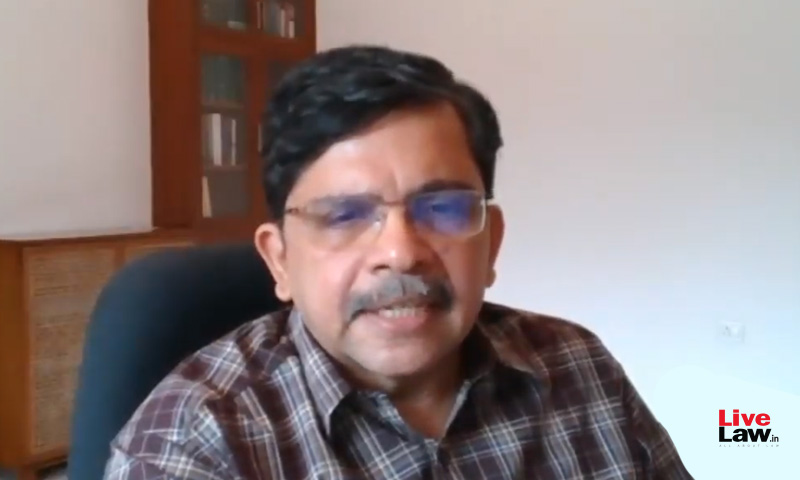 x
"If a law school cannot teach a student to respect difference and dissent, it would have failed in a very fundamental way", he said.

He was speaking at a webinar hosted by LiveLaw on the topic "Imagining Legal Education in Contemporary India" as part of the First Shamnad Basheer memorial lecture, moderated by Dr Anup Surendranath, Assistant Professor of National Law University, Delhi.

Justice Muralidhar started the session by remembering Professor Shamnad as "a person of positivity and vitality", who challenged the young minds of legal education.

"Shamnad challenged young minds of legal education. His cherished dream was to make legal education inclusive. He was critical of the manner in which CLAT was conducted. He was of the view that it kept out a large section of young underprivileged students", he said.

"These concerns of Shamnad led to the formation of the remarkable initiative of IDIA(Increasing Diversity by Increasing Access) in 2010. Due to IDIA, a generation of daily wage workers, clerks etc would see the next generation clear CLAT and become legal professionals after 5-year education in NLUs. Undoubtedly, IDIA will be viewed as Shamnad's pioneering, transformative, and lasting contribution to legal education in India. It is great pity that Shamnad left us when he was at his peak", he said.

Justice Muralidhar remembers Professor Shamnad as a person of 'positivity and vitality' who for students was a "provocative teacher".@shamnad @IDIALaw pic.twitter.com/4vGcKyfbrz

Justice Muralidhar quoted Professor Upendra Baxi to state that '"law schools must not only be sites of legal excellence but also of equity".

"Law colleges must foster socially relevant legal education. They must lay the foundation for the student in democratic practises, constitutional values of equality and non-discrimination, inclusivity and plurality in the broadest terms", he said.

"If a law school cannot teach a student to respect difference and dissent, it would have failed in a very fundamental way", he opined.

The study of law must provoke curiosity about the lives of people, about processes and powers at work, whether be it of the State, corporates, civil society, mass movements. In addition, exposure to all kinds of politics would be essential.

"Value of college education is not the learning of many facts but the training of the mind to think", he said, quoting Einstein.

According to him, if a law school can be said to have achieved its purpose if it teaches the student  to :

What A Law School Should Teach? From Dr. Justice S Muralidharhttps://t.co/plC7HCmfgK

He opined that the study of law must be based on its social and political context.

The lived experiences of marginalized communities and the accounts of subaltern engagements with law provide a rich source for law students to understand in what context the law functions.

"In studying the law on untouchability, or manual scavenging, the students will have to listen to the voices of the affected communities", he said.

Indian society needs socially sensitive and community-oriented lawyers who in turn would require a curriculum that exposes them not only to legal processes but also to factors that affect a client and a lawyer.

Law schools must cater to the needs their geographical surroundings

'True education must correspond to the surrounding circumstances', Justice Muralidhar quoted Mahatma Gandhi to say that a law school must cater to its geographical location.

A law school as an institution would have to communicate with its environment both geographically and sociologically and account for the cultural specificities of its immediate surroundings.

For example, a law school in Ranchi should give opportunities for the students to interact with the area and mingle with its people, much of which is governed by the 5th schedule of the constitution (tribal autonomous region).

A law school in north-east should be able to give exposure to diverse and customary practices of laws in different tribal groups and help them understand the various tensions between the formal legal system and the informal legal system.

As another example, he said that the issues related to taking over of natural resources under the pretext of development could be studied by students of colleges situated near the sites of such contestation.

J Muralidhar told from his own experience of teaching credit courses on socio-economic rights that such interactions are much more effective than classroom lectures.

He opined that the Bar Council needs to think more proactively, to see the wide spectrum of legal education. There needs to be active consultation on regular basis on updating syllabus and curriculum, he said.

Need to increase diversity and access in legal education

Quoting from the IDIA survey of 2018, Justice Muralidhar said that more than 80% of students of NLUs come from wealthy, urban, English-speaking backgrounds.

85% of students of NLUs had enrolled for expensive coaching for CLAT. Over 80% received funding from their parents.

Less than 3% of NLU students are from rural areas studied in the vernacular medium. Less than 4% of the students are Muslims. There is an abysmally low representation of students from North East, he said, referring to the IDIA report.

He lauded the efforts of IDIA in not only helping students from diverse and underprivileged sections to gain entry to law schools but also in ensuring financial and moral support for them throughout their education.

To help its scholars navigate law schools, Justice Muralidhar said, IDIA has the program of the selection of senior law students as mentors. It has also conceived of strategic programs to improve soft skills in scholars and to build resilience in them to withstand hostile environments and isolation.

"IDIA has been a successful experiment with encouraging results. Can this be scaled up by the State governments to reach thousands of law colleges across the country?", he asked.