'Advocacy Skill Has To Be Honed To Suit Judges' Approach' : Tips By Sr Adv C S Vaidyanathan On Effective Lawyering 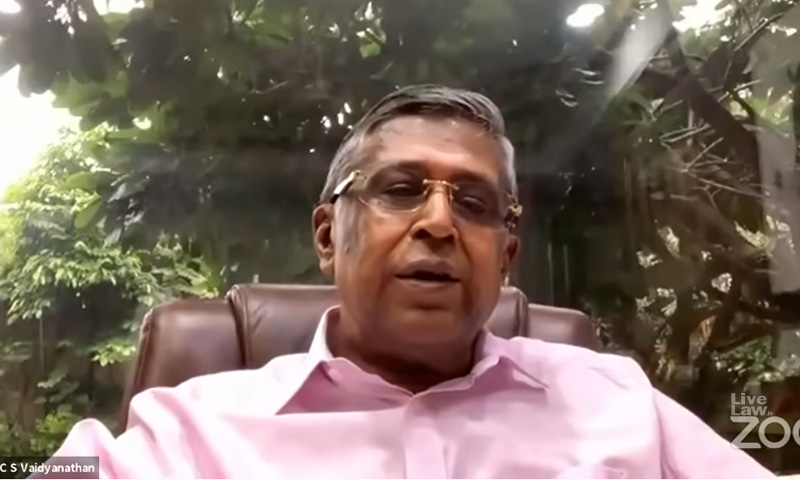 In the latest edition of LiveLaw's legal practitioners' webinar series, Senior Advocate CS Vaidyanathan threw light on some of the most desirable practices that lawyers could adopt while speaking extensively on "The Future of Advocacy in India". At the outset, Mr. Vaidyanathan expressed his concern over the lack of urgency being shown by Indian Courts in dealing with matters of...

In the latest edition of LiveLaw's legal practitioners' webinar series, Senior Advocate CS Vaidyanathan threw light on some of the most desirable practices that lawyers could adopt while speaking extensively on "The Future of Advocacy in India".

At the outset, Mr. Vaidyanathan expressed his concern over the lack of urgency being shown by Indian Courts in dealing with matters of personal liberty. He said that Habeas Corpus matters used to be given their due and disposed of swiftly, something that does not happen anymore.

"Habeas Corpus petitions would be heard! If it is filed today it will be listed tomorrow. There was no question of counter affidavit in such a plea. The file had to be produced. In 24 to 48 hours, the Habeas Corpus petitions would be disposed of. I think there is something which we have lost over the years. The urgency in regard to dealing with personal liberty matters which was very much there , unfortunately has been lost."

Throughout the rest of his talk, he emphasised on the need to keep oral arguments focussed and written submissions crisp. Not only are these essential for an advocate to present his case effectively, but it is something that would help reduce pendency of cases. Expressing great concern over pendency, Vaidyanathan said that the problem shakes the confidence of the people in the justice system and it is incumbent upon lawyers to keep up their faith in the system.

"Our relevance as lawyers is only when the credibility of the institution is at the highest, when the faith and confidence of the people is at the highest. If we are not able to deliver justice to the consumers of justice then it gets shaken. We have 3.5-4 crore cases pending.

…People should not be encouraged to take law into their own hands, they should go through the system to get justice. That is part of our role as lawyers, to not only enable the people to continue to have faith, but to enhance their faith in the system", he elaborated.

Vaidyanathan noted that though there have been a number of amendments etc. to try and tackle this problem, not much has changed. "I feel both judges and lawyers have been very very reluctant to make changes where necessary", he added in this regard. Towards this end, to facilitate a better justice system for the people, Vaidyanathan made various suggestions regarding skill development of lawyers.

Starting with the need to keep written submissions brief, Vaidyanathan stressed that Petitions should never be long. In order to ensure this, one must write their own plaints, and not dictate them. In today's times, he said, technology is being abused by both lawyers and judges.

"If you dictate you are going to make it longer, which is what is happening. Technology today is being abused, by judges and by lawyers because 'cut and paste' means you take out from everywhere and put it. I have seen judgments of the Madras HC which were half a page or one page long, handwritten judgments. When you sit and write your thoughts are also clear but when you dictate you ramble. Precision in drafting is one of the most important things", he said.

In this light he also stressed on the importance of summarising a case properly to be able to catch the attention of the judges. If you do not put forward your point in a focussed manner, you will not be able to attract the judge's attention to your grievance and the ultimate goal of getting justice for your client will not be fulfilled, averred the senior advocate.

"I was AOR for 13 years, and the synopsis I prepared would never be longer than 1.5 pages, preferably 1 page. If you can't put across a case in 1 page in Supreme Court, you are not going to hold the attention of the judges. Whatever is the case, you should be able to put over your point in 1-1.5 pages.

…As lawyers, we are here to ensure that our clients get justice. For that, you have to be able to attract the attention of the judge to the injustice that has been done, the injustice that lacked remedy and the point that they must consider. Once you manage to do that through a 1 page synopsis, the Judge will look into the details more closely."

Vaidyanathan also highlighted that Judges work under 'tremendous strain', and amidst this, to get justice for one's client they must be able to put across your case in a focussed manner.

Moving on to oral arguments, in the same way, he said that lawyers must develop the skill of putting across their arguments in the most effective manner. Time management, he averred, is of essence. Recalling his early days in Chennai, he stated, "Judges in Madras High Court would not read up and come in those days, like they do in Supreme Court these days. Arguments would be put across effectively in 2-3 minutes. 70-80 admissions would be wrapped up in the first half of the day. Appeals would not be longer than 1.5-2 pages. Crisp, sharp questions of law would have been there. 25-30 appeals would be taken up in a day.

…Though judges wouldn't read up much in terms of the file, they would get the point very quickly. The advocacy, the skill of the lawyer is very important in such a scenario as they could put across the case in a few minutes."

In order to be able to advance arguments in the most effective fashion, the senior advocate laid emphasis on the need to prepare for a hearing correctly. He spoke in great length about the kind of work that needs to be put in before coming to Court.

"Deep thought goes in in the chamber before you actually advance arguments. You can't go through the brief selectively and then you go there where judges are also flexible in granting you sufficient time. No. Before arguing, put down your thoughts and enunciate them in a crisp, focussed manner."

Speaking about understanding your arguments and knowing which point to stress on, the senior advocate said, "you know the argument which has maximum appeal. There's no point arguing all points with equal emphasis. If I don't succeed in convincing the judge with your main 2 points, it is unlikely that you will succeed in that matter."

He went on to refer to case management techniques adopted in UK and similar pre-decided time slots being assigned in Court in USA. He highlighted how lawyers in India, like their counterparts in US and UK, must set aside time to prepare a hearing, like a rehearsal for the same by timing one's arguments and exploring the possible questions that judges may have and therefore being ready with answers.

"Approach needs to change, our skill set will have to develop this kind of preparation. Every lawyer must either be put through such skill training or undertake such training on his own."

Not only lawyers, but Judges also ought to be trained to achieve the ultimate goal of a more efficient justice system. "There's also a need for unlearning some things and relearning a few things. Not only lawyers, but also judges. Judges need to be given some training from time to time especially with regard to what is happening today in terms of e-courts or virtual hearings."

As an example of good Court time management, Vaidyanathan took the example of the Ayodhya land dispute hearing.

"People may have different views with regard to the Ayodhya judgment, but the way it was managed from the point of court management and time management, we have to give full marks. Enough time was given but time limits were stuck to. All 5 judges were also very keen that we stick to the time. Remarkably we were able to finish 2 days before what was originally planned. The intense homework done by all lawyers ensured that we were able to stick to the time limit and put over the case."

Sharing further tricks of the trade, Mr. Vaidyanathan elaborated on the importance of understanding a Judge's approach and background prior to arguing before him. "Advocacy skill has to be honed to suit the approach of the judge", he maintained while urging lawyers to attend Court proceedings irrespective of whether they have a case or not.

"That is how you will be able to see the reaction of the judges to various issues before them and what is their approach. That way you develop an understanding of the judge. Knowing this is important because then you will understand what is the point which you will stress on during arguments.

…If it's a compassionate judge, even if you are weak on law sometimes you may be able to get something from them in view of settling matters."

Amongst other skills, lawyers must never accept anything as a given, and question everything, opined the senior advocate. He also urged lawyers to develop the ability to read balance sheets and the profit and loss accounts and work out the cost and viability of a project. elaborating further, Vaidyanathan spoke of the roles of stakeholders in conducting impact assessments of cases on people involved in it. He said-

"Financial impacts of judgments must be evaluated…

…Judicial impact assessment needs to be done by the legislators, wherein they consider the impact of their work on the judiciary. The judges have to do an impact assessment in terms of the lives of people, in regard to the commercial aspect of the people's lives.

…Another question that needs to be asked is what impact every case has on the environment."

Upon being asked about the role of virtual courts and their future, the senior advocate was quick to assert that Virtual courts cannot replace physical courts, but they can supplement them. Throwing more light on this, he enunciated that "we should not completely disband or dispense with virtual courts even when we resume with physical courts. We may envisage a situation where there is a combination of both."

Citing situations where one lawyer does not have to leave all his work and go to another city to argue, as virtual hearings enable him to appear in different parts of the country from one place, Vaidyanathan said this convenience is important. "Technology has given us this advantage, we should use it." However, he added, "there are many cases where we cannot but have physical hearings."