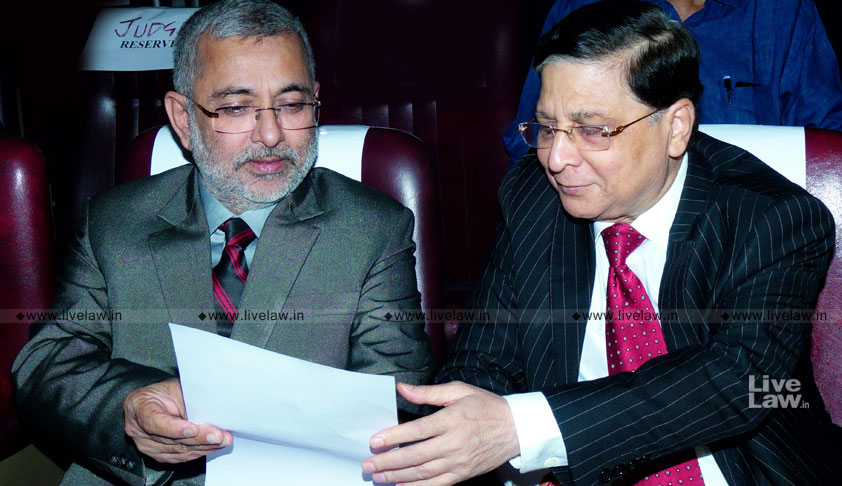 Days after his retirement, Supreme Court judge, Justice Kurian Joseph has spilled the beans on the unprecedented press conference that he was a part of, along with three other judges, in January this year.

In an interview to TOI, Justice Joseph has claimed that the four judges felt that former Chief Justice of India Dipak Misra was being controlled from the outside and was allocating cases to judges with political bias.

"Someone from outside was controlling the CJI, that is what that is what we felt. So we met him asked him, wrote to him to maintain independence and majesty of Supreme Court. When all attempts failed we decided to hold a press conference. Starkly perceptible signs of influence with regard to allocation of cases to different benches, to select who were perceived to be politically biased ", He said

During the press conference, the four judges—Justice J. Chelameswar, Justice Ranjan Gogoi, Justice M.B. Lokur and Justice Joseph—had asserted that the administration of the Apex Court is “not in order” and that many “things less than desirable” have been happening.

It was also revealed that the judges had written a letter to CJI Misra, with concerns relating to assignment of matters, among other things. While acknowledging that the CJI is the master of the roster, the letter had asserted that this was “not a recognition of any superior authority, legal or factual of the Chief Justice over his colleagues”.

“There have been instances where case having far-reaching consequences for the Nation and the institution had been assigned by the Chief Justice of this Court selectively to the benches “of their preference” without any rationale basis for such assignment. This must be guarded against at all costs.

“We are not mentioning details only to avoid embarrassing the institution but note that such departure have already damaged the image of this institution to some extent,” the letter had said.

Addressing the events that led up to this conference, Justice Joseph was now quoted as saying, "There were several instances of external influences on the working of the Supreme Court relating to allocation of cases to benches headed by select judges and appointment of judges to the Supreme Court and high courts.

"Someone from outside was controlling the CJI, that is what we felt. So we met him, asked him, wrote to him to maintain independence and majesty of the Supreme Court. When all attempts failed, we decided to hold a press conference.”

He also told TOI that while Justice Chelameswar was the initiator of the idea of the press conference, the other three judges had agreed with him that the only option left was to bring it to the notice of the nation.

“There was one other reason. My position has always been that there are two watchdogs, one of which is the media. We came out to let there be an awareness that we have done our best. Despite barking the master is in deep slumber. So we decided to bite,” he added.

As for the reaction garnered by the conference, Justice Joseph told ThePrint that a few Supreme Court judges in fact conveyed to them that they would have liked to have participated in the press conference as well.

He now seemed hopeful, considering that there have been significant changes in the system since then. “The biggest change is that there is a lot more transparency now,” he told ThePrint, adding, “There’s an attempt to introduce a system and practice as opposed to an individual taking decisions.”

Following Justice Chelameswar’s example, Justice Joseph had also publicly declared that he would reject any post-retirement job offered to him. Commenting on his decision, he now asserted, “Having been in a constitutional post, I have always held my head high. You should not bend it down for roti-chawal.”

Two weeks back, Justice Chelameswar had also opened up regarding the controversies during the tenure of ex-CJI Misra, while speaking at a lawyers' gathering at Kochi. Justice Chelemeswar criticised the manner in which the order in Medical college bribery case was annulled and denied allegations that the press conference was driven by personal agenda. He also commented about the lack of transparency in collegium meetings and roster allotments.