When Brecht Speaks As Ambedkar 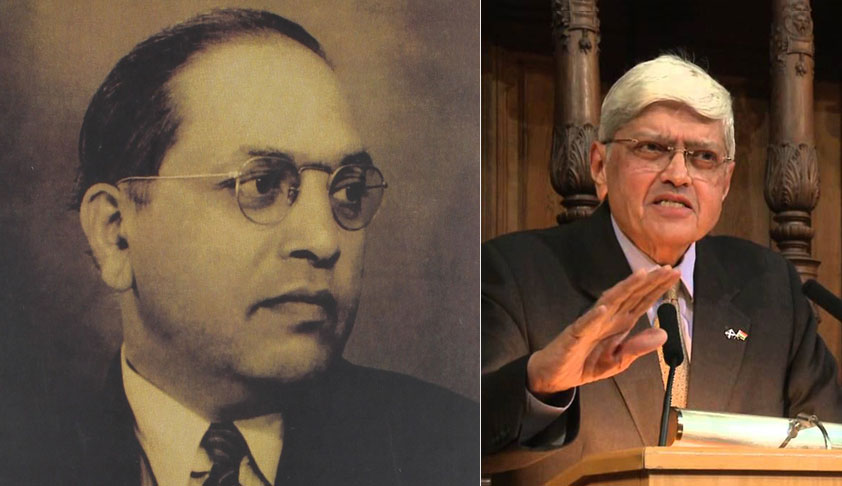 Citing literary sources, turning to parables, prose, plays, poetry is the wherewithal of political discoursePolicemen and policewomen are not mindless digits in khaki. They have all been to school. Many of them are MAs, some PhDs. And they have families, friends just like anyone else who has not been clad in hide-tough uniforms the whole day. When at end of duty hours they return home, get...

Policemen and policewomen are not mindless digits in khaki. They have all been to school. Many of them are MAs, some PhDs. And they have families, friends just like anyone else who has not been clad in hide-tough uniforms the whole day. When at end of duty hours they return home, get back to home-clothes, settle down to a tired day’s evening, like anyone else, they talk of all they went through during the day, good and bad, honest and wicked, how they had to respond to political orders, ‘high’ influence, low intrigue. They laugh then at the ways of the cunning world of which they have become part, and feel sometimes proud of what they did and sometimes not. And then turn on their television sets to watch not news — of which they have had enough and more — but, to lighten their minds, old and new cinema, hear Lata Mangeshkar singing through the lips of Meena Kumari, or Asha Bhosle through those of Madhubala. In States like West Bengal and Maharashtra, with their strong traditions of theatre and musical arts, they can well go to see a play, ‘with family’, based on old epics or written by bold new playwrights staged in theatre-houses invariably named after Tagore, in his grey-flowing beard or the great Chhatrapati Shivaji in his sharp-pointed black one.

Yet, Bertolt Brecht’s is not a name all policemen on duty in Maharashtra’s Bhima-Koregaon village on January 1, 2018 are likely to have known. The great German playwright is, sadly, ‘niche’. Why sadly? Because he is bound to have amused, inspired, delighted, enthralled the non-kitabi, the not-a-bookworm-at-all as much as the bespectacled ‘intel’. And because Brecht speaks the truth and doesn’t care a hoot whether his truth is seen as the truth or is not. And Brecht’s truth, rather like truth itself, is non-denominational, non-sectarian. The Marathi translation of his timeless play The Good Person of Szechwan is more than likely to have passed by the police force on duty at the village celebrating, as it has done for decades, on that day the great Dalit-Mahar battalion’s vanquishing – disputed by some – of the much stronger army of the Peshwa order known for its rough-handling of Dalits. Only, this year the celebration was the more celebratory, being the centenary year of that 1818 victory. And since one group’s celebration is seen as another group’s lamentation, ‘law and order’ was a concern. And rightly so. Violence and counter-violence saw ‘the law’ swing into action, ‘order’ asserting itself. And months later, arrests are still being made. Has all this been without ‘fear or favour’? The courts will, without doubt, tell us.

Those who know Brecht’s play laugh at lines in it like these:

“I am afraid of making enemies of other mighty men if I favour one of them in particular. Few people can help us, you see, but almost everyone can hurt us.”

“Stomachs rumble even on the emperor’s birthday.”

“The First God: Do people have a hard time here? Wang the water-seller: Good people do.”

“The First God to Shen Te the prostitute: Above all, be good, Shen Te, Farewell!”

“Shen Te: But I am not sure of myself, Illustrious Ones! How can I be good when everything is so expensive?”

“The Second God: We can’t do anything about that. We mustn’t meddle with economics!”

And they would have understood, with a sigh, the line: “No one can be good for long when goodness is not in demand.”

The same play, one of the funniest, wittiest, most profoundly thoughtful and mind-rinsingly disturbing in that genre, has the woman prostitute-protagonist burst out with the words: “Unhappy men! Your brother is assaulted and you shut your eyes! He is hit and assaulted and you are silent!… What sort of a city is this? What sort of people are you? When injustice is done there should be a revolt in the city. And if there is no revolt, it were better that the city should perish in fire before the night falls…”

In words that powerfully echo Brecht’s, the architect of our Constitution, Babasaheb Bhimrao Ambedkar, said in the Constituent Assembly: “How long shall we continue to live this life of contradictions? How long shall we continue to deny equality in our social and economic life? If we continue to deny it for long, we will do so only by putting our political democracy in peril. We must remove this contradiction at the earliest possible moment or else those who suffer from inequality will blow up the structure of political democracy which this Assembly has so laboriously built up.”

Here is a great, perhaps the greatest, German writer of our times, using a Chinese parable to give the world a touch of truth about the human condition, the human propensity for domination and the human impulse for freedom, justice. And when on January 1, 2018, in the Bhima-Koregaon event these lines with a timeless and location-free message were recited in their Marathi rendering, they were seen as “an incitement to violence”. If, instead of Brecht’s the reciter had cited Babasaheb’s words, would he have been charged with incitement to violence? Today, who can tell?

Mohandas Gandhi was charged, likewise, in the spring of 1922 “for inciting disaffection towards His Majesty’s government” for articles by him published in Young India. In one of them, titled ‘Shaking the Manes’, he used a phrase from then current political discourse and ‘shook’ the Raj. The accused said in his famous trial: “I have no personal ill-will against any single administrator, much less can I have any disaffection towards the King’s person. But I hold it to be a virtue to be disaffected towards a government which in its totality has done more harm to India than any previous system.”

We have our own Brechts.

Just before the declaration of the national emergency in 1975, Jayaprakash Narayan had, before a massive rally in Delhi, quoted the great Hindi poet Ramdhari Singh Dinkar’s lines: “Singhasan khali karo ki janata aati hai (vacate your throne, here come the people).” We know what happened thereafter to JP, to India. Also, what happened subsequently to the system that imprisoned him.

Faiz Ahmad Faiz’s poem Hum Dekhenge (We Shall See) is a classic in the same vein, quoted time and again as a call against oppression.

Citing literary sources, turning to parables, prose, plays, poetry is the wherewithal of political discourse. Our Prime Minister has in a Dinkar commemoration cited the same line with pride.

Just as policemen on duty are only human beings in uniform, so are lawyers in black silk. They know true from false, fact from fiction.

India, the theatre from time immemorial of a hundred injustices, a thousand oppressions is also the site of a million awakenings. Therein lies its strength.

Kuchh bat hai (there is that something), as Iqbal sang, about Hindustan that cannot let its self-hood fade.

Gopalkrishna Gandhi, a former Governor of West Bengal, is a distinguished professor of history and politics, Ashoka University.

This article was first published in THE HINDU , You can read the original article here.

Read the FIR of 8th January 2018 by Tushar Damgude on Elgaar Parishad and Bhima Koregaon violence, in which activists have been arrested in August regarding which a petition was filed by Romila Thapar and others in the Supreme Court.