Women’s Day Special; 10 Recent Judgments that stood by the fight for Women Empowerment 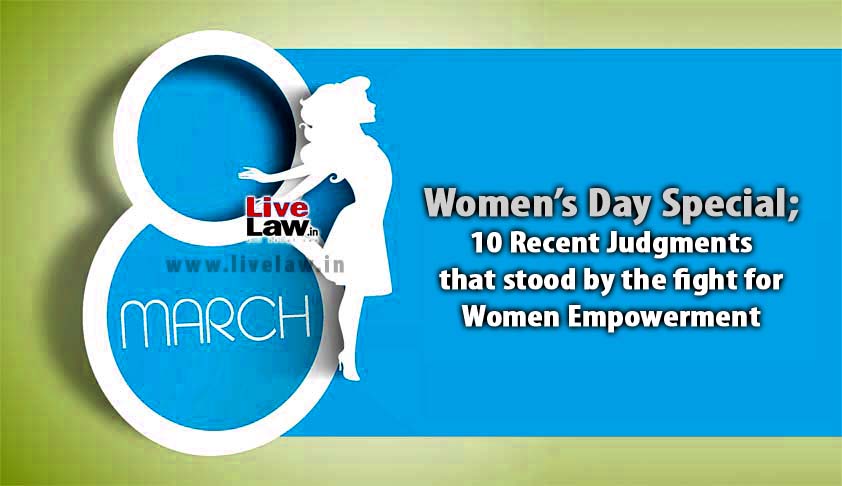 It’s another Women’s Day and India still witnesses heated discussions, debates and various events that would lead to what we profoundly call women’s empowerment. The nation had produced women whom left a mark in various spheres of human life as astronaut, corporate heads, Supreme Court and High Court Judges, Leading Lawyers , athletes, media persons, politicians (including one of the...

It’s another Women’s Day and India still witnesses heated discussions, debates and various events that would lead to what we profoundly call women’s empowerment. The nation had produced women whom left a mark in various spheres of human life as astronaut, corporate heads, Supreme Court and High Court Judges, Leading Lawyers , athletes, media persons, politicians (including one of the Prime Ministers), diplomats; the list goes on. Despite all these great tales, India is still a patriarchal society where women faces discrimination and injustice- be it professional or personal. The political and legal arena in India are on two sides with the framing of the famous ‘Women’s Reservation Bill’, which still has not received a final consensus in parliament. Regardless all these odds, various courts across the country and the apex court have passed remarkable judgments that motivates the nation to empower women. Below listed are ten recent judgments that went in favour of women.

“Women empowerment is the need of the hour”- Supreme Court

A two Judge Bench of the Supreme Court in Richa Mishra v. State observed that Women in this world, and particularly in India, face various kinds of gender disabilities and discrimination, and Women empowerment is the need of the hour. The Bench comprising of Justices A.K.Sikri and Justice A.M.Sapre was hearing an Appeal filed by one Richa Sharma who was denied the post of Deputy Superintendent of Police in Chhattisgarh Police.

Supreme Court against gender discrimination in the Indian Navy

The Supreme Court has slammed the Indian Navy for gender discrimination, unreasonable classification and strongly favoured permanent commission for women officers in all wings after they complete their short service commission. Navy’s September 26, 2008 rule offered permanent commission to women officers who joined after the date but only in education, law and naval architecture branches. Justice T S Thakur made the observations while hearing an appeal filed by the Navy and Ministry of Defence against the Delhi High Court order asking it to grant permanent commission to 19 women officers in the education, logistics and ATC branches. They had completed 14 years of their Short Service Commission. Significantly the SC directed that a total of 12 petitioners who were in logistics and ATC branches be allowed to continue in service till they decided the Navy and MoD’s appeal Senior lawyer Rekha Palli appearing for the lady officers vociferously argued how after using their services for 14 long years the women officers were being thrown out of service.

Refining the settled position relating to maintenance to divorced Muslim women, a two judge bench of the Supreme Court has held that women cannot be treated as beggars and their grace cannot be lowered in rightful claim to maintenance after divorce if the husband has since then retired from his service. The bench comprising of Justices Dipak Misra and P.C.Pant while reinstating the order of the family court allowed the appeal and also took strict note of non grant of interim maintenance against the settled position of law for very long.

Supreme Court has given quietest to a property dispute between cousins of a family in Uttar Pradesh, which arose in a suit filed in 1978. The Apex court bench comprising of Justices Ranjan Gogoi and N.V. Ramana held that, though a women could not be treated as Karta of a joint family, she can be a manager of a joint family, in some particular circumstances. The bench also held that the expression ‘Manager’ can be understood as denoting a role distinct from that of the Karta from that of the Karta.

In a recent judgment, Punjab and Haryana High Court has held that a woman doctor can’t be debarred from joining the Army Medical Corps (AMC) just because she became pregnant during the course of the selection process. “By forcing a choice between bearing a child and employment, it interferes both, with her reproductive rights and her right to employment. Such an action can have no place in modern India,” Justice Harinder Singh Sidhu observed. The Court was hearing a petition demanding quashing of a letter which intimated the petitioner, Ms. Neetu Bala that she was unfit to join service, despite the issue of an appointment letter. Ms. Bala had applied for grant of Short Service Commission in the Army Medical Corps. She successfully cleared the interview and was selected in the rank of Captain. The subsequent medical examination disclosed that she was seven months pregnant, but with no complications. She then received the impugned letter, informing her that she was unfit to join service. She requested that a vacancy be reserved for her so that she could join after delivering the child, but she received no response. She then petitioned the High Court.

The Kerala High Court has held that the rule prohibiting women from working as Bartenders is unconstitutional. Justice Dama Seshadri Naidu, allowed the writ petition moved by women who were working as waitresses/restaurant assistants in a bar attached to a hotel in Trivandrum saying that they faced the threat of termination from their employment with the introduction of a new Rule governing the Bars attached to hotels.

Frowning upon the “sexist bias” that appears to have “blocked the progress of women”, a Delhi High Court Bench comprising Justice Kailash Gambhir and Justice Najmi Waziri has allowed women to have full term service in the Indian Navy and enjoy retirement benefits. The Court was hearing six separate pleas filed by 19 women officers in the education, logistics and ATC branches of the Navy, who had completed the 14 years of their Short Service Commission. While granting their plea, filed through Senior Advocate Rekha Palli, the Court said the “women are here to stay” and since they “work shoulder to shoulder” with their male counterparts, it would “frown upon any endeavour to restrain the progress of women”. The Petitioners had approached the Court after their counterparts in the Army and Air force were granted relief on the same issue in 2010 by another bench

Benefit of Probation of Offenders Act cannot be extended to Accused involved in Crimes against Women: Supreme Court

Hearing a special leave petition filed by State of Rajasthan, the Supreme Court Bench consisting of Justices Pinaki Chandra Ghose and Uday Umesh Lalit has ruled that the benefit of Probation of Offenders Act cannot be extended to accused involved in crimes against women. The special leave petition came before the Court after the Rajasthan High Court had rejected the appeal of the State filed against the acquittal of the accused. The accused, Sri Chand was alleged to have lured a 12 year old girl, who was grazing buffaloes in the jungle, and taking her into a room wherein she was forcibly undressed and the offense of rape was committed on her.

In a landmark ruling, the Delhi High Court recently held that the eldest woman of a Hindu Undivided Family can be its ‘Karta’, a term which denotes the managership of an HUF. The issue to be decided by the Court was whether the plaintiff, Mrs. Sujata Sharma, who was the first born amongst the co-parceners of a Hindu Undivided Family property, would by virtue of her birth, be entitled to be its Karta. The parties to the suit before the Court were co-parceners of D.R. Gupta & Sons, HUF. The Court gave due consideration to the Hindu Succession (Amendment) Act, 2005, pursuant to which all rights which were available to a Hindu male are now also available to a Hindu female. A daughter is now recognized as a co-parcener by birth in her own right and has the same rights in the co-parcener’s property that are given to a son.

Husband living and begetting child with another woman is immense mental cruelty to wife: Delhi HC

Delhi High Court has imposed exemplary cost of five lakhs on a husband for wasting the time of the Court by pressing a frivolous appeal against the Divorce decree granted against him. Justice Vipin Sanghi said that the , the Court is not bound to admit every appeal and if on initial evaluation of the appeal, it appears that the same is absolutely meritless,, the same may be disposed of summarily at the stage of admission itself. The wife was granted divorce by the Family court on the ground that the conduct of the husband in begetting a child with another lady tantamount to cruelty to the wife.