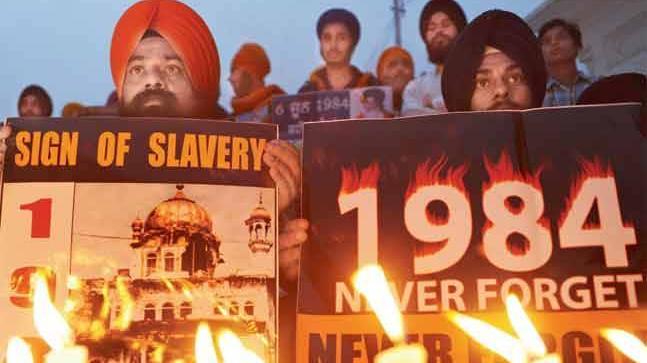 "Neither, "crimes against humanity" nor "genocide‟ is part of our domestic law of crime. This loophole needs to be addressed urgently", the Court urged.The Delhi High Court yesterday observed that the anti-Sikh riots of 1984 answered the description of 'crimes against humanity' as the mass killings were "engineered by political actors with the assistance of the law enforcement...

The Delhi High Court yesterday observed that the anti-Sikh riots of 1984 answered the description of 'crimes against humanity' as the mass killings were "engineered by political actors with the assistance of the law enforcement agencies".

While reversing the acquittal of Congress leader Sajjan Kumar and affirming the conviction of four others for their involvement in the 1984 riots, the Court observed that such cases are to be viewed in the larger context of mass crimes that require a different approach.

The Court noted that the killings were planned and systematic. What happened in the aftermath of assasination of Smt.Indira Gandhi was a carnage of unbelievable proportions, in which over 2,700 Sikhs were murdered in Delhi alone", it said.

"There was a two-pronged strategy adopted by the attackers. The first was to liquidate all Sikh males and the other was to destroy their residential houses leaving the women and children utterly destitute", observed the Court.

The HC bench of Justices S Muralidhar and Vinod Goel invoked the concept of 'crimes against humanity', which was first evolved in the  joint declaration by the governments of Britain, Russia and France on 28th May 1915 against the government of Turkey following the large scale killing of Armenians by the Kurds and Turks with the assistance and connivance of the Ottoman administration. The Court made references to the  Nuremberg trial against Nazi criminals accused of mass termination of Jews and also the charters of the International Criminal Tribunals established for former Yugoslavia and Rwanda, which dealt with 'crimes against humanity'.

"Crimes against humanity" are globally understood as "inhumane acts" that are part of a “systematic or widespread attack against any civilian population on national, political, ethnic, racial or religious grounds.” It incorporates a contextual element to the crime - that the perpetrator is contributing widespread or systemic attack targeting victims on basis of identity the Court noted.

The riots in early November 1984 killed 2,733 Sikhs in Delhi alone and nearly 3,350 all over the country, as per official figures. The Court noted that this was neither the first instance of mass killings, nor the last.

"There has been a familiar pattern of mass killings in Mumbai in 1993, in Gujarat in 2002, in Kandhamal, Odisha in 2008, in Muzaffarnagar in U.P. in 2013 to name a few. Common to these mass crimes were the targeting of minorities and the attacks spearheaded by the dominant political actors being facilitated by the law enforcement agencies", observed the judgment authored by Justice Muralidhar.

As a common feature of these mass crimes, the Court observed: "The criminals responsible for the mass crimes have enjoyed political patronage and managed to evade prosecution and punishment. Bringing such criminals to justice poses a serious challenge to our legal system"

This, in the opinion of the Court, called for strengthening the legal system. The Court also suggested changes in law to address 'crimes against humanity' and 'genocide'.

The Court emphasised that lapse of time cannot be justification to condone such crimes. There is obligation to prosecute crimes against humanity, no matter the lapse of time.

The Court was dealing with a case concerning the killings of five Sikhs in the Raj Nagar Part I area in Palam Colony in South West Delhi on 1st and 2nd November 1984 and the burning down of a Gurudwara in Raj Nagar Part II.

The prime witness of the case was Jagdish Kaur. She lost her husband Kehar Singh, son Gurpreet Singh and cousins Raghuvinder Singh, Narendar Pal Singh and Kuldeep Singh in the riots, who were killed in front of her. While the riots were raging, she had to perform the cremation of her husband and son by lighting a funeral pyre with the help of furniture and household clothes.

Jagsher Singh, another cousin of Jagdish Kaur, and Nirpreet Kaur, who saw the Gurudwara being burnt down and her father being burnt alive by the raging mobs(which is subject of another case), were the other main witnesses. The Court lauded their courage and perseverance. The conviction resulted out of fresh investigation which was carried out by the CBI in 2005. CBI was entrusted with the investigation based on the recommendations of Justice Nanavati Commission, which entered findings regarding the involvement of Sajjan Kumar in the riots.

The main defence of Sajjan Kumar was that it was only before the Nanavati Commission that the witnesses testified against him for the first time. According to him, none of the witnesses had made any allegation against him in the previous rounds of investigations.

Regarding this, the Court found that Jagdish Kaur had in fact revealed the name of Sajjan Kumar as the instigator of killings before the Justice Ranganath Misra commission(which gave a clean chit to members of Congress party). She had made the statement originally in Punjabi and that the contents were also recorded in Punjabi. But in the English translation, the references to Sajjan Kumar were omitted.

The Court also noted that though Kaur was subjected to strenuous cross examination for about three months, no inconsistencies or contradictions could be brought in her testimony. She was described a "fearless and truthful witness".

The High Court criticised the trial Court for ignoring the testimonies of witnesses against Sajjan Kumar, while accepting their testimonies in relation to other accused persons. "It is indeed strange that having accepted the testimony as regards the involvement of these three accused,the trial Court performed a complete U-turn when it came to believing her testimony as far as the involvement of A-1(Sajjan Kumar) was concerned"

Connivance and apathy of Delhi Police

The Court came down heavily on the Delhi police for its connivance with the rioters. The way Delhi police acted during the riots established their "apathy" and "active connivance" in the brutal murders, said the Court.

The Bench noted it was "extraordinary" that despite there being as many as 341 deaths in Delhi cantonment area within a span of four days, only 21 FIRs were registered, of which 15 pertained to murders. Each case of death had to be separately registered, the Court noted.

The Court also found that there were repeated efforts by Delhi police to manipulate the statements of witnesses, especially the testimony of Jadgish Kaur, to cover up the involvement of Sajjan Kumar.

"The police indeed turned a blind eye and blatantly abetted the crimes committed by the rioting mob. The investigation by the local police was a farce.The State machinery came to a complete standstill in those two or three days when the rioting mobs took to the streets and indulged in acts of violence and killings, and setting properties on fire",it said.

The victims of the 1984 riots had every reason to believe that they had been abandoned by the police. The atmosphere of distrust dissuaded the witnesses from coming forward to speak up. It was only after the CBI took over the investigation in 2005 that the witnesses found the courage to testify, the Court observed.

Sajjan Kumar has been sentenced to life imprisonment for the reminder of his life for criminal conspiracy of murder, rioting, destruction of property, and for promoting communal hatred and outraging religious sentiments. He has been asked to surrender before December 31.