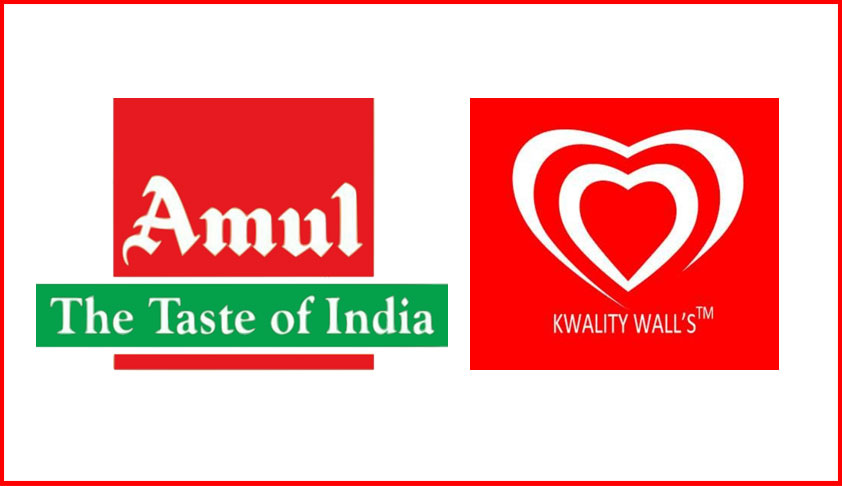 The Bombay High Court recently granted relief to Gujarat Co-operative Milk Marketing Federation (GCMMF)-run Amul and allowed it to run two TV advertisements after it removes portions disparaging rivals like Kwality Wall's for using Vanaspati in their ice-creams.A division bench of Justice BR Gavai and Justice RI Chagla partly allowed the appeal filed by the GCMMF against a judgment of a...

A division bench of Justice BR Gavai and Justice RI Chagla partly allowed the appeal filed by the GCMMF against a judgment of a single bench of Justice SJ Kathawalla as reported earlier, wherein Amul was restricted from broadcasting two TV ads as they were disparaging towards Hindustan Unilever-owned Kwality Wall's, its rival.

As Justice Kathawalla noted in his judgment, the distinction between ice creams and frozen desserts was made for the first time in 2005 with an amendment to the regulations framed under the Prevention of Food Adulteration Act, 1954.

Senior Advocate Ravi Kadam appeared on behalf of the appellant GCMMF. He submitted that the complaint about these two TV ads was made by one of the senior officers of HUL to the Advertisement Standard Council of India (ASCI) to show that what was found to be objectionable was the word Vanaspati'.  He, therefore, submitted that, once GCMMF omitted the word "Vanaspati" and substituted it with the word "Vanaspati tel", which, in fact, is used by HUL in its product, the grievance could not survive. In order to find out as to whether a particular TV commercial disparages the product of the rival or not, the court has to apply the test of an ordinary person with reasonable intelligence.  What is required to be seen is that, in the short period during which the advertisement is aired, what is registered in the mind of an ordinary person with reasonable intelligence, Kadam said.

Kadam then relied on several judgments and asserted that comparison between two products is permissible. He stated that said TV commercials had not referred to Kwality Wall's in any way and simply stated the comparison between frozen dessert and ice cream. He further submitted that if, in comparison, true facts are brought to the notice of the consumers at large, it would not amount to disparagement but would amount to educating the consumers. While considering the advertisement, the rival is not expected to be hypersensitive to the advertisement, Kadam argued.

Senior Counsel Aspi Chinoy appeared on behalf of HUL and submitted that the message that the advertisement intended to be given to the consumers at large, is apparent from the advertisement. Referring to the TVC, Chinoy said that in the advertisement, in one cup milk is shown to be flowing, whereas in another cup with labelled "frozen dessert" Vanaspati i.e., the semi-solid product is showing dripping. In India, Vanaspati is considered to be dangerous to the health, therefore the message is loud and clear, that frozen desserts are not good for health. He submitted that, insofar as puffing up of the product of the appellant is concerned, nobody could have an objection, even if an untrue statement is made. However, the advertisement carrying the message which disparages the product of the competitors, would not be permissible in law, Chinoy said.

After examining all the facts, the bench said:

"It could thus be seen that, even according to the own admission of the Appellant, hydrogenated fat or Vanaspati has harmful effects on the health. If, with this knowledge, the Appellant has aired the impugned advertisement, showing that all the manufacturers of frozen desserts use Vanaspati or Vanaspati tel, there can be no manner of doubt that intent of the advertisement is to show that Frozen Desserts are manufactured by using Vanaspati and that the said products which are manufactured with the use of Vanaspati are dangerous to the health.  We have no manner of doubt, to hold that TVCs have an effect of disparaging the frozen desserts in general and dissuading the class of consumers from using it. As held in catena of cases, Appellant can very well make a false claim to puff up their product. It can also make statements which are not true to its knowledge to show how its product is superior. It can even compare its products with the competitors. However, the Appellant cannot be permitted to air the advertisement which disparages the product of its competitors."

However, the court also found that there was no need to restrain Amul from broadcasting both TVCs entirely-

"We are of the view that such a blanket injunction could not have been granted by the learned Single Judge. Perusal of the advertisement would reveal that, entire TVC cannot be said to be of objectionable nature."

Thus, the bench partly allowed the appeal and allowed Amul to use the two TV commercials only after the parts disparaging frozen desserts is removed. Other modifications were made to the language used in the judgment.