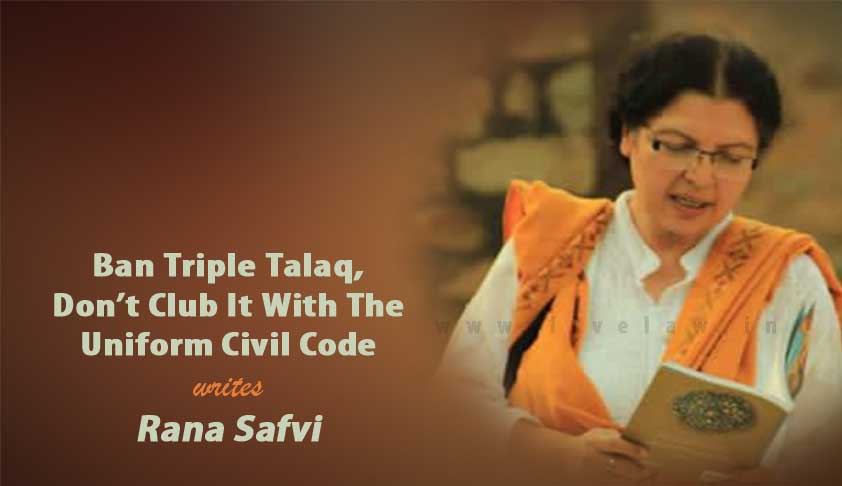 I am neither a lawyer, nor an Islamic scholar and not even an activist. I am writing this in the capacity of an ordinary Muslim woman. I am happily married and not in any danger of Triple Talaq. My fight is for my sisters who cannot comprehend the legal complexities of divorce and the hindrance created by the same on their own rights.

I have seen the bewilderment and agony of a young girl who received the pronouncement of triple talaq via sms for no fault of her. I am taking up this fight for her and for many more girls like her. I am determined to take up this battle to the logical end of the same.

The back ground on the current controversy

A petition of a 35-year-old woman, Shayara Bano challenging the divorce by uttering the words Talaq three times, has ignited the debates around the veracity of such a practice of unilateral Talaq. She has appealed against the divorce on the basis of fundamental rights enshrined in the constitution:

Article 14 guarantee equal rights to all citizens. Article15 prohibits discrimination on grounds of religion, race, caste, sex or place of birth. Article 25 says that religious freedom is subject to fundamental rights. Despite the same she is entitled to get remedy against the regressive practice of triple talaq.

Now let us have a look at it from the religious angle. The All India Muslim Personal Law Board, grounded on the values of patriarchy seems to be worried that abolishing triple talaq would put Islam in danger.

Triple Talaq is not being practiced in most of the Islamic countries, but in India it has been subject to never ending debate since decades.

The word talaq means release from marriage .The term triple talaq is mentioned nowhere in Quran. It is mentioned as Talaq e bidat or Divorce of innovation and had been introduced after the Prophet.

Prophet Mohammed has defined talaq as the most abhorrent among the practices approved by Allah. It is the last resort if the relationship reaches a dead end. Talaq is permitted if the couple find that the differences cannot be settled and divorce inevitable .It is insisted that the divorce should be done in an amicable atmosphere and no way one should harbor hate against the other. [Abu Dawud, Sunan, Kitab at-Talaq, 2/255]

The procedure is that the word talaq has to be pronounced in a period of three months. Reconciliation attempts have to be done by whoever concerned as much as possible. The third and final pronouncement has to be done only when it is found that the differences are irrevocable .Also divorce cannot be given in anger or a state of intoxication.

There are two types of talaq prescribed in the Quran Talaq-e-Ihsan, (most preferred) where the husband pronounces talaq and for the next 3 months he has no physical contact with his wife. This gives him time to think and if after 3 months he changes his mind he can go back to her and their marriage is valid.

The one that the Quran says is most preferred is Talaq e Hasan (preferred) where the husband pronounces the word talaq but not in 30 seconds. He says it over a period of three months and in between there is every attempt for reconciliation with arbitrators being appointed by both. If after that the differences are irreconcilable he says it a third time and the divorce is final.

Divorce may be pronounced twice, then a woman must be retained in honour or allowed to go with kindness.” [Qur’an, 2:229].

The words divorce may be pronounced twice refer to two months not two seconds and they can be revoked. It is an effective check to prevent divorce on account of emotional outbursts and high-handedness of a husband who may recover his balance of mind and reconsider his unreasonable pronouncement. It is only when talaq is proclaimed the third time (after three menstrual cycles) that it becomes irrevocable.

Then there is the talaq in question - Talaq e Biddat. It was a practice came up in the period of the Second Caliph Hazrat Umar. It is pertinent to note that only the Hanafi sect amongst the Sunnis accept the legality of this practice of divorce. The Shias and ahle hadeeth refute it.

Talaq Bid'a or irregular divorce is where a husband repudiates his wife by three divorces at once. According to the majority of the jurists, the Talaq holds good, but it is against the spirit of the Shari'ah, and, therefore, the man who follows this course in divorce is an offender in the eye of Islamic Law.

There is a Hadith recorded by Imam Abu Dawud and several others, which quotes an incident when Rukanaibn Abu Yazid said “talaq” to his wife three times on a single occasion. He felt remorse for what he did and went to the Prophet for guidance. The Prophet advised him pronouncing talaq three times at once has no validity and all three are counted as one. The Prophet said, “All three count as only one. If you want, you may revoke it.” Fath al-Bari, 9/275

The practice of Triple Talaq must be seen in the socio-historical context in which Caliph Umar allowed the same. It was assumed to be an appropriate ruling as men had made talaq a joke in those days by pronouncing it thrice and then again taking them back, and repeating this several times leaving the women in a limbo. They were neither divorced nor free to remarry. What came as a reform has been hung in the neck of the women as a millstone.

The practice of Triple Talaq has to be banned. Women’s right to divorce in Islam or khula has to be made easier. At the moment the women have to do it through a qazi and after giving valid reasons whereas the men can do it adhoc.

Another point: it is imperative that we delink Triple Talaq from Uniform Civil Code. Nowhere has Shayara Bano talked of UCC. She has only asked for a ban on Triple Talaq. Here let me quote Mehru Jaffer, author and columnist. Jaffer says that asking for a ban on Triple Talaq does not mean that Shayara or any other woman fighting against it wants to go back to former husband. She is trying to address the gender inequality involved in this arbitrary practice of talaq.

India is made up of many communities and religious sects . Each of them has their own personal laws and customs. Amidst all these we must ensure gender equality and also equality for all Indian citizens.

At the present moment, for various reasons, (justified or not justified is a matter of separate debate), Muslims feel vulnerable and are not ready to accept Uniform Civil Code which they feel threaten their religious identity. Yet media seems to have gone overboard in linking the two, any attempt to link Triple Talaq with Uniform Civil Code will only weaken and destabilize any positive attempt to abolish triple talaq .The Government should go for a ban on Triple Talaq under the Constitutional provisions for equality but hold back the implementation of a Uniform Civil Code and wait till a climate of consensus is created.

Don't club the two. They are separate issues and require separate debates.

Rana Safvi is an author and historian with a passion for culture and heritage. Her books include Where Stones Speak & Tales from Quran & Hadith.