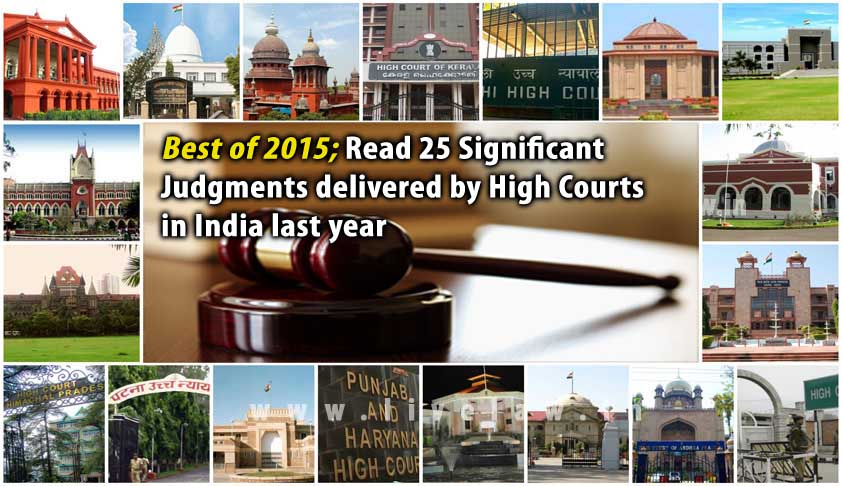 LiveLaw has reported almost all important judgments of various High Courts across India in 2015. Here is the list of 25 significant and most discussed Judgments delivered by various High Courts across India.1. Newspaper must report an order of the Court as it stands, instead of creating sensation This ruling by Himachal Pradesh High court is very significant as far as we reporters are...

1. Newspaper must report an order of the Court as it stands, instead of creating sensation

This ruling by Himachal Pradesh High court is very significant as far as we reporters are concerned. Many media houses try to sensationalize the Court orders and judgments and it is high time they should introspect and behave responsibly upholding the ethics of journalism. In this case The High Court of Himachal Pradesh had come down heavily on a newspaper, for indulging in repeated misquoting and misreporting of the orders. The Court issued notice to the reporter who appeared and tendered unconditional apology which was accepted.

2. Toilets for ‘woman walking on the streets’

Toilets First, Temples Later, the Prime Minister of India had said during one of his election campaigns last year. We are yet to see in coming years whether he will walk the talk. But anyhow, The Bombay High Court issued detailed guidelines on the issue of setting up in setting up toilet facilities for `women walking on the streets’. Division bench of Justices A.S. Oka and Revati Mohite Dere said that Public health is of paramount importance and that it is the duty of the State and the Corporations to ensure that public latrines, urinals and similar conveniences are constructed, maintained and kept in a hygienic condition.

4. Being a Maoist is not a crime

Justice Muhamed Mustaque of Kerala High Court, in a landmark ruling, observed that “being a Maoist is of no crime”. “Police cannot detain a person merely because he is a Maoist, unless Police forms a reasonable opinion that his activities are unlawful,” the Court had observed.

In an attempt to draw the attention of the apathetic authorities to the sub-standard state of the Primary Government schools in the State, Allahabad High Court directed Uttar Pradesh Chief Secretary to ensure that children/wards of government officials/servants, those serving in the local bodies, representatives of people and judiciary, etc., send their wards to these schools.

7. Criticism of Government is not sedition

Hearing a criminal PIL relating to arrest of cartoonist Aseem Trivedi and application of charges relating to sedition provided in the Indian Penal Code against him, the Bombay High Court made it clear that the provisions of section 124A of IPC cannot be invoked to penalize criticism of the persons for the time being engaged in carrying on administration or strong words used to express disapprobation of the measures of Government with a view to their improvement or alteration by lawful means.

The Karnataka High Court directed the Government and Police department to seriously think of forming an Expert Committee to scientifically work out the allocation of work of each police station defining the territorial jurisdiction, staff strength, de-linking investigation from law and order, establishment of an excellent Training Centre here at Bengaluru, and also opening of new police stations at the earliest.

9. Welfare schemes for minorities not unconstitutional

In a significant ruling, Allahabad High Court held that blocking 25% of the benefits in a Pension scheme in favour of minorities is not invalid. Upholding the validity of Samajwadi Pension Yozna, wherein 25% of the benefits were blocked in favour of ‘minorities’, the court held that Minorities are a class in themselves and State is not prohibited in making welfare scheme for the minorities belonging to weaker section, provided it does not overreach and undermine the constitutional provisions.

10. Guidelines to protect Right to Privacy in Family Matters

The Division Bench of the Delhi High Court said that lawyers are expected to act with professional responsibility in cases that involve disclosure of private and personal information. The court issued various guidelines including this “Where a party in a case seeks to rely upon a document which in his or her assessment or the assessment of the party’s lawyer is of a sensitive nature, viz., which contains details of a personal or private nature concerning a party or a person or their conduct, which when disclosed is likely to affect the right to privacy, or cause embarrassment, then such party and/or the lawyer of such party will first apply to the Court seeking leave to produce such document in a sealed cover.”

Allahabad High Court  directed the State Government to ensure that all FIRs be uploaded on the website of the U.P. Police, except in exceptional circumstances, “where the need to preserve the identity of the victim, the course of proper investigation, the protection of witnesses and other aspects involving a predominant consideration of public interest may warrant the FIR not being uploaded on the website.”


Kerala High Court in Dhanyamol and another v. State has held that the rule prohibiting women from working as Bartenders is unconstitutional. Justice Dama Seshadri Naidu, allowed the writ petition moved by women who were working as waitresses/restaurant assistants in a bar attached to a hotel in Trivandrum saying that they faced the threat of termination from their employment with the introduction of a new Rule governing the Bars attached to hotels.

The Delhi High Court held that office of the Attorney General of India is a public authority under the Right to Information Act. The Court decided the same while hearing a writ petition filed by RTI Activist Mr. Subhash Chandra Agrawal, which was against the order passed by full bench of CIC wherein the Central Information Commission had held that the office of Attorney General was not a public authority under the RTI Act.

The Chhattisgarh High Court held that the policy of the State Government barring and prohibiting the consideration of the married daughter from seeking compassionate appointment merely on the ground of marriage is plainly arbitrary and violative of Article 14, 15 and 16(2) of the Constitution of India.

15. Frame legislation in the matter of rehabilitation of rape victims

Allahabad High Court, in a Petition filed by a minor rape Victim, requested the Government to frame suitable legislation in the matter of rehabilitation of rape victims. It also directed the state government to State Government make a fixed deposit of a sum of rupees ten lakhs in the name of Victim. The court remarked “The question of rehabilitation of a rape victim can best be answered by the people and the masses and not by the courts alone. They should be accepted; not haunted by the society”.

Bombay High Court allowed the Appeal filed by Bollywood superstar Salman Khan against a Trial Court verdict which sentenced him for Five Year Imprisonment in the 2002 Hit and Run Case. Justice A.R.Joshi acquitted him of all charges holding that the prosecution failed to prove the Case beyond reasonable doubt.

Frowning upon the “sexist bias” that appears to have “blocked the progress of women”, a Delhi High Court Bench comprising Justice Kailash Gambhir and Justice Najmi Waziri has allowed women to have full term service in the Indian Navy and enjoy retirement benefits.

Madras High Court issued Guidelines to prevent intrusion of person having criminal antecedents without legally studying bachelor of Law Degree for maintaining the purity in the justice delivery system. It also directed the Bar Council of India is to abolish three year Law Degree Course at the earliest and retain only five year Law Degree Course on par with other Professional Courses like Medicine and Engineering.

Gujarat High Court observing that Polygamy is not encouraged in Islam and is an exception and not a Rule, however made clear that a Muslim cannot be prosecuted be prosecuted for Bigamy [S.494 IPC] in the absence of a Uniform Civil Code. The Court said that it is for the maulvis and Muslim men to ensure that they do not abuse the Quranic injunctions to justify the heinously patriarchal act of polygamy in self-interest. The Court also opined that hat time has come to shun the practise of bigamy and to introduce a Uniform civil code.

20. Compensation to victim of ‘traffic jam’

In a Public Interest Litigation filed by Shri Abhishek Gilke, a law student from Devi Ahilya Vishwavidyala, Indore praying compensation from various authorities of the state government to be paid to a widow for loss of life of her husband Late Vishal Mandloi who succumbed to heart attack being caught in a traffic jam, the Indore Bench of the Madhya Pradesh High Court issued directions to the government to award appropriate compensation to her.

Bombay High Court   quashed the ban on Nestle Maggi noodles imposed by the Food Safety and Standards Authority of India, as it found that there were blatant violation of Principles of natural justicewhile imposing the ban. Nestle (India) had challenged the nationwide ban imposed by the Food Authority on its popular product Maggi Instant Noodles before the Bombay High Court.

Delhi High Court dismissed the Petitions filed by Congress President Sonia Gandhi and Vice President Rahul Gandhi challenging the summons issued by a Trial Court on a Criminal Complaint filed by Dr. Subramanian Swamy. The court said that the modus operandi adopted by petitioners in taking control of AJL via Special Purpose Vehicle i.e. Y.I., particularly, when the main persons in Congress Party, AJL and Y.I. are the same, evidences a criminal intent.

The lookout notice issued by the Government of India Greenpeace activist Priya Pillai has been quashed by the Delhi High Court. The Court in its judgment observed, “The core aspect of democracy is the freedom of an individual to be able to freely operate, within the framework of the laws enacted by the Parliament.

The High Court of Kerala, considering a case (Inter Media Publishing Ltd vs. State of Kerala – WP(C).No. 10727 of 2013) where a Malayalam newspaper by name “Thejass” was denied Governmental advertisements on the ground of it propagating extremist ideology and thereby creating communal divisions in the Society at large, has in a pellucid judgment observed that the Indian Press has to maintain secular credential while discharging public function, and that their actions must be in conformity with secular values of the State as envisaged in the Constitution.   Justice A. Muhamed Mustaque also added that any attempt on the part of the Press to divide the people and country on the line of religious or communal hostility will have to be curbed by any responsible Government.