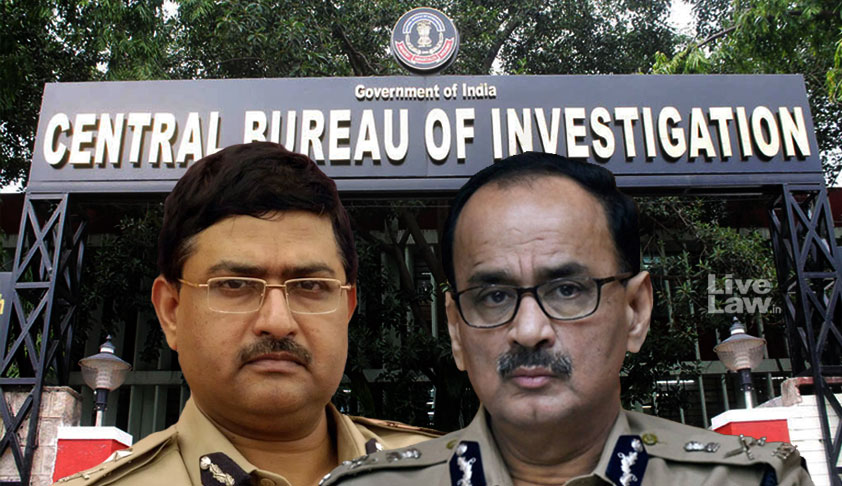 The Delhi High Court on Tuesday restrained the Central Bureau of Investigation (CBI) from taking any coercive action against CBI Special Director Rakesh Asthana, ordering maintenance of status quo until the next hearing date, October 29. It, however, clarified that the ongoing probe in the matter will continue, and issued notice to CBI and Alok Verma, the CBI Director.The order was issued...

The Delhi High Court on Tuesday restrained the Central Bureau of Investigation (CBI) from taking any coercive action against CBI Special Director Rakesh Asthana, ordering maintenance of status quo until the next hearing date, October 29. It, however, clarified that the ongoing probe in the matter will continue, and issued notice to CBI and Alok Verma, the CBI Director.

The order was issued after Mr. Asthana moved the Delhi High Court challenging the FIR filed against him in a bribery case. He alleges that Mr. Verma began “mistrusting” him, after two officers who the latter wanted to induct as Joint Directors were not taken on board the CBI. It says that Mr. Verma was under the impression that Mr. Asthana was responsible for the non-induction of the two officers.

“The subsequent incidents of tarnishing the image of the Petitioner herein, began after this incident,” the petition says.

The internal war within the investigative agency escalated this week, with the arrest of CBI DSP Devender Kumar, who, along with Mr. Asthana, has been accused of taking Rs. 3 crores in bribes from businessman Sathish Babu Sana.

Sana was being probed by an SIT led by Mr. Asthana for a suspicious transaction of Rs. 50 lakh with Moin Qureshi, a meat exporter accused in a money-laundering case. During its investigation, the SIT chanced upon evidence of alleged payment of bribe of Rs. 2 crore to Mr. Verma by Sana with the help of a Rajya Sabha member belonging to a regional party.

Mr. Asthana had then forward the allegations to CVC for enquiry. Further, on September 12, a proposal was rooted through the SIT for arrest and custodial interrogation of four persons, including Sana. This proposal was approved by Mr. Asthana on September 20, and was put up before Mr. Verma the same day for appropriate directions.

The petition now points out that “in complete departure from the practice and contrary to procedure prescribed by CBI (Crime) Manual, 2005”, Mr. Verma forwarded the file to the Director of Prosecution for his opinion, instead of noting his reasons for not approving the said proposal.

The proposal reached Mr. Asthana again on October 3. While reiterating the proposal for custodial interrogation, he had then asserted that the file may not be marked to the Director of Prosecution as investigation is at a crucial stage. The petition submits that since October 3, nothing has happened on the file.

On the contrary, a complaint was made by Sana, alleging that Mr. Asthana, through the IO of the case, demanded illegal gratification of Rs. 2 crore for protecting Sana in the investigation.

The petition now questions the intent behind the filing of the FIR, submitting, “The present Petition would disclose the shocking state of affairs and also reveal as to how the highest officer of the premier investigating agency of the Country is trying to falsely implicate the Petitioner, who is the second senior most officer of the Agency, in order to hide his own criminal misconduct of influencing investigations in exchange for money. The Petition would also disclose the clear illegalities committed at the hands of the Respondents.”

The complainant is a person who is proposed to be arrested by the Petitioner and his Special Investigation Team, he is found to be involved in entering into a conspiracy for slowing down the investigation against him…Now, this person turns back and makes the SIT itself an accused. It is pertinent to note that the Officers of SIT are being prosecuted and this accused person is enjoying the freedom, liberty and protection from the highest officer of the Investigating agency.”

Mr. Asthana further contends that the FIR was registered in violation of Section 17A of the Prevention of Corruption Act, which requires prior sanction for investigating a serving officer. He points out that instead of obtaining sanction from the competent authority, an FIR was registered against him and the premises of the Investigating Officer were raided.

“If the basis used by CBI in registering the present case is adopted in general, then any two persons can register an FIR against any public servant only on the basis of SMS, WhatsApp messages, calls etc exchanged between them,” the petition asserts.

Furthermore, it submits that the FIR has been registered under Section 13(1)(d) of the Prevention of Corruption Act, 1988, which has been deleted through an amendment in July, 2018 and is no more an offence.

It goes on to pose several questions, such as lack of evidence of delivery of payment to Mr. Asthana or any public servant, and the filing of FIR after a complaint accusing Mr. Verma of the same charges. It alleges that the “bald and frivolous allegations of an accused… have been taken as gospel of truth by CBI against its own officers for ulterior motives without there being any material basis”.