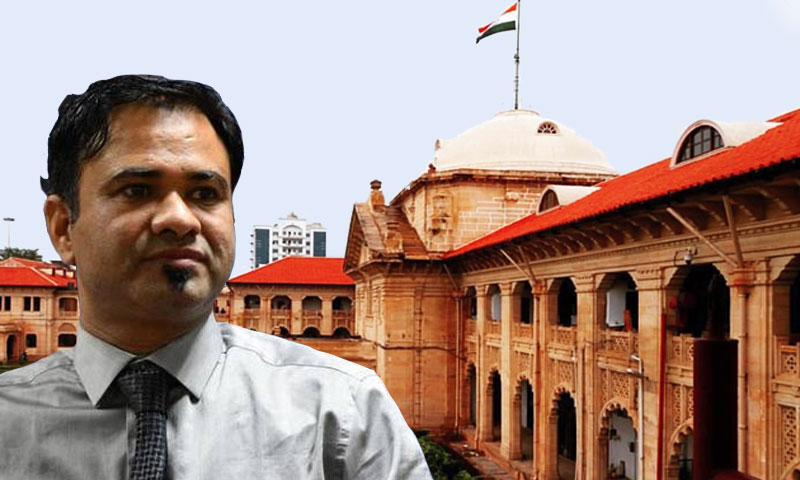 Dr. Kafeel Khan is released from Mathura jail last night after the order of the Allahabad HighCourt which quashed his detention under the National Security Act. He was booked under the National Security Act for delivering a provocative speech at the Aligarh Muslim University. The High Court did not find his speech objectionable and ordered his immediate release from the jail. This judgment...

Dr. Kafeel Khan is released from Mathura jail last night after the order of the Allahabad HighCourt which quashed his detention under the National Security Act. He was booked under the National Security Act for delivering a provocative speech at the Aligarh Muslim University. The High Court did not find his speech objectionable and ordered his immediate release from the jail. This judgment is a great ray of hope for all those who believe in a controlled constitutional government and work towards the cause of promoting the rule of law, human rights, dignity, and constitutionalism in the country. Through this verdict, the Court has sent a strong message to the executive to follow the mandate of the rule of law and human rights and treat citizens with dignity. This is a great judgment that needs to be appreciated widely. This is indeed a great ray of hope during this difficult time when people are suffering badly from Corona pandemic and executive excesses.

Dr. Khan was lodged in jail since 29 January this year. As mentioned above, he was accused of delivering a provocative speech at the Aligarh Muslim University on 10 December 2019 during the Anti-CAA/NRC protests that were held in many parts of the country. His detention was extended in August this year for another three months. His mother Mrs. Nuzhat Parveen had filed a habeas corpus petition seeking his release on grounds that the U. P. government had framed her son illegally. The Supreme Court had also directed the Hon'ble Allahabad High Court to decide the case expeditiously. In her petition, his mother had stated that her son had been granted bail in February this year but the District Magistrate had slapped NSA on him before he could be released from the jail.

Notably, in U.P. and many other states, nowadays it has become a fashion to impose the NSA or some other draconian laws on accused persons once they get bail from the courts of law. The police book them immediately under the NSA or other draconian laws to obstruct their release from the jail if they get bail. This adamant executive attitude is nothing but a clear threat to the administration of justice, judicial power and, the rule of law. It shows "Hum dekhtte hain tum kaise bahar aogey" attitude of the police authorities towards the accused persons who knock the doors of courts of law for their release on bail. In other words, the police pose a challenge to the accused regarding their release from the jail. The police wrongly think that their powers are unlimited and nobody can check them. It is widely believed that in all these matters, the District Magistrates and the police officers act as per the instructions of their political masters who target specific people due to political reasons and vote bank politics. The Hon'ble Allahabad High Court has sent a strong message to such officers who take personal liberty, human rights, and the rule of law lightly. The Court has told them clearly that they cannot violate people's fundamental rights while exercising their powers of arrest and detention. There should always be some valid reasons to detain people under the NSA or other laws that provide preventive detention.

A Division Bench of the High Court of Allahabad comprising Chief Justice Govind Mathur and Justice S. D. Singh rightly quashed Khan's detention order saying that "A complete reading of the speechprima facie does not disclose any effort to promote hatred or violence. It also nowhere threatens peace and tranquility of the city of Aligarh. The address gives a call for national integrity and unity among the citizens. The speech also deprecates any kind of violence." The Court also held that the District Magistrate had selective reading and selective mention for few phrases from the speech ignoring its true intent which was not sufficient to detain Dr. Khan under the NSA. The Court did not find any justifiable reasons for Khan's detention under the NSA and rejected the story of the detention order framed by the District Magistrate and asked the government to release him immediately. Last night, he was released from Mathura jail.

It is pertinent to mention that before concluding the discussion, the Court observed that preventive detention is an exceptional mode to curtail liberty and personal freedom and the right to personal liberty is a precious fundamental right as per Article 21 of the Constitution which should always be protected. The Court found no justifiable reason to curtail the personal liberty of Dr. Khan. This is why his detention order was quashed in Habeas Corpus proceedings. The Court further observed that "Under our constitutional scheme the nation of India is weaved as a democratic republic where social, economic and political justice to every citizen is secured, where liberty of thought, expression, belief, faith are constitutionally protected, where every citizen is at equal status with equal opportunities. The system of governance is to promote fraternity with assurance to maintain the dignity of every individual as well as unity and integrity of the nation. The strong and valuable fabric of our nation is well designed with support of fundamental rights given in Part-III of the Constitution. These rights are golden thread in the fabric, which is further illuminated by extending protection of life and personal liberty under Article 21 of the Constitution of India. True it is, the right so given under Article 21 is not absolute but no one can be deprived of his or her personal liberty except on such grounds and in accordance with such procedure as are established by law. Any act that causes injury to the valuable rights given in Part-III of the Constitution would be nothing but an effort to weaken the fabric of our nation, a democratic republic. We are examining the entire issue involved in this petition with the conceptual understanding of the fundamental rights as above."

The above-mentioned observations of the Hon'ble High Court reflect the commitment of the judiciary to protect the fundamental rights of the citizens as guaranteed in our constitutional scheme. The judiciary is the guardian of the rule of law and the people knock its doors when their rights are violated by the executive or their agencies. People's trust is the greatest strength of our judicial system. The people hold the judiciary in high esteem. By land large, the judiciary has also protected this public faith on many occasions. The Court has truly protected this public trust by coming to the rescue of Khan in this case and punctured his illegal detention by critically examining the subjective satisfaction of the executive authorities. The District Magistrate was failed to show any valid material to detain Dr. Khan under the National Security Act. Rejecting the arguments of the government regarding the subjective satisfaction of the authorities, the Court said that "it does not mean that the court cannot look into the material on which detention is based. The expression "subjective satisfaction" means the satisfaction of a reasonable man that can be arrived at on the basis of some material which satisfies a rational man. It does not refer to whim or caprice of the authority concerned. While assessing "subjective satisfaction of the detaining authority" the Court examining a petition seeking a writ of habeas corpus has to look into the record to examine whether the subjective satisfaction is acceptable to a reasonable wisdom and that satisfies rationality of normal thinking and analyzing process. The grounds for detention with supporting material is also required to be looked into to ascertain whether it is sufficient to enable the detenue to make his representation at earliest, of course, this opportunity must be effective and real. In view of above, we have looked into the speech delivered by the detenue. The closure of examining record as suggested would be nothing but a licence to allow the executives to act at their whims or caprice. This would be against the fundamentals of our constitutional values and provisions." Indeed, these are truly justified observations in accordance with our constitutional scheme. The Court has full power to examine the material on the basis of which the detention order is based. There is no scope for absolute discretion in a constitutionally controlled democracy.

The executive cannot be allowed to violate people's rights under the cover of 'subjective satisfaction'. There should always be some justified reasons to detain people as the detention violates people's fundamental rights and freedoms. No authority can detain people on its own will. It cannot be allowed in a country which is governed by the rule of law. We are not a dictatorial regime. We are a constitutional democracy where the powers of the rulers are subject to the judicial scrutiny. Each authority is bound to give justification for issuing orders that affect people's interests and legal rights. This is a basic requirement of a government based on the rule of law. No government can exercise powers against the fundamental principles of the Constitution and the rule of law. The judiciary would obviously check the executive excesses and legal violations.

In the light of these observations, the High Court quashed Khan's detention under the NSA and ordered his immediate release. This judgment would be a milestone towards the cause of personal liberty movement and protection of human rights. It will be a lesson for those who take judicial power for granted and put people behind the bars in false cases. It is a great victory of the rule of law over the majoritarian attitude that breaches rule of law. The Court has rightly sent a message to the executive that it is not above the law and is required to exercise its powers as per the laws and the constitutional norms. In a constitutional democracy, the people have all rights to criticise the policies of the government if such policies violate their rights or interests. No democracy can or should stop criticism. Criticism is a must for a healthy democracy and those who criticise the government should not be called anti-nationals or threats to national security. The Preventive Detention Laws should not be used to suppress the dissent. In this land of Bapu, law is the king of kings!

(Author is a practising Lawyer at the Supreme Court of India)