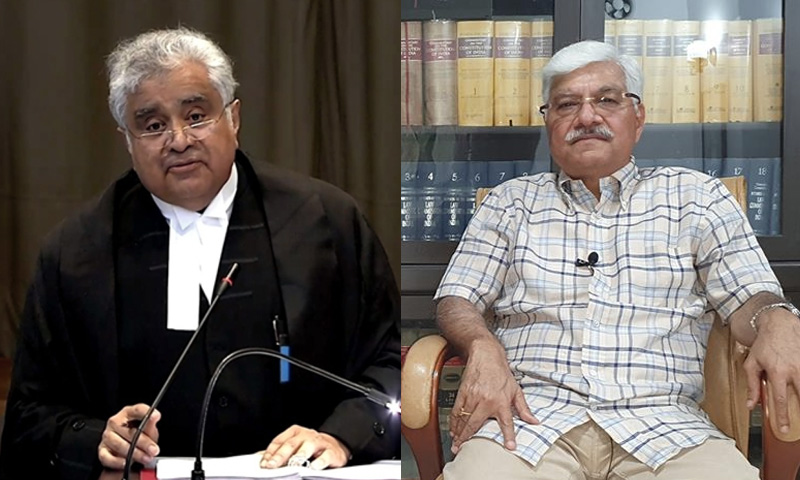 The wise crack of Mr. Harish Salve is in reality an attempt to revive the debate called "Tyranny of the unelected". It is not difficult to guess who has said this. Though Mr. Salve has tried to hedge his diatribe by referring to the 4G issue in Jammu & Kashmir, my suspicion is that these observations are prompted by the recent happenings. Yes, the 4G issue in J&K was vociferously taken...

The wise crack of Mr. Harish Salve is in reality an attempt to revive the debate called "Tyranny of the unelected". It is not difficult to guess who has said this.

Though Mr. Salve has tried to hedge his diatribe by referring to the 4G issue in Jammu & Kashmir, my suspicion is that these observations are prompted by the recent happenings. Yes, the 4G issue in J&K was vociferously taken up by members of the Civil Society and they were openly critical of the reluctance of the Supreme Court to grant relief in the matter. There is no denying the pressure, yet it did not lead His Eminence to criticize then. Why resort to it two months later using a phraseology similar to Late Shri Arun Jaitely? Jaitely's comment was clearly directed towards the judges. I am not convinced that the diatribe of Mr. Salve is unassociated with the orders passed by the High Courts earlier and now the Supreme Court. It's not so innocuous as is made out to be.

The severe containment techniques enforced by the Centre, that is the lockdown, social distancing and cancellation of all means of transport, resulted in exodus of migrants all over the country. Millions were on the roads, highways and railway tracks with the sole desire of inching closer to their home against all odds. The spectacle of misery that we witnessed and are continuing to do so is unparalleled.  Anyone who has been a witness to this migration would certainly believe that this rank as the defining moment of the 21st century history of India.

In the light of these events, we may now assess the observation of Mr. Salve. The migration has certainly led to a sanguine split amongst people. There are those in the government and outside who believe what the government did in its wisdom is enough and rest is a matter of collateral damage, even if there are omissions on its part. According to them, there is no scope for Courts to interfere at the nudge of the Civil Society, which is unelected. Short of uttering the phrase 'tyranny of the unelected',  he has tactfully invoked its spirit. The invokers of this phrase would criticize the interference of the courts with welfare direction as pressure. But they themselves forget that by their criticism they are doing exactly that.

The second category comprises of those very civil society members who did file petitions to nudge the courts to intervene for the welfare of the people already steeped in misery and dying of it. I have not seen such a spectacle all my, not so short, life.   It may be interesting to see in which category the wise crack of Mr. Salve falls.

In my view, Mr. Salve would certainly fall under the first category for more than one reason. Firstly, in times of such dire sufferings it is wholly undesirable to be critical of the unelected who have uses an important Constitutional tool to assuage the misery of the masses. Secondly, Articles 14, 19 and 21 strike at the very root of the tyranny of the Executive, whether by action or by its omission. Here we have a case of deliberate negligence which was barbaric. Now either Mr. Salve did not witness the plight of the migrants or is ready to overlook it. The first appears to be improbable as the whole world saw it for days together. The second can only be prompted by some other reasons which only he would know. I am not ready to believe that his terse statement was a result of some conservative judicial approach.

Thirdly, what is the purport of Article 14, 19 and 21?  By now it is well settled that these liberties guarantee much more than non-arbitrariness. They guarantee humanism in life, especially to the week and the deserted. The tool was constitutional and the theme song was equally so. Where is the problem? The unelected stepped up in a constitutional way to checkmate the barbaric lethargy in the governance. How can this even remotely be termed as 'tyranny of the unelected'? Can there be any other way in which courts can enforce liberties given in the Constitution? Every interference can be termed as tyranny of the unelected because the government knows best.

Lastly, the use of this phrase , which has almost sinister implications, following so soon after the frustration expressed by the Solicitor General has the same ringtone. There is definite nexus between the two diatribes. Though Mr. Salve tried to hedge his expressions but to any keen observer the linkage is more than apparent. Is he not doing the same thing that he set out to criticize? Is it not pressuring the court by the unelected, to keep itself out of bounds? This is my objection to his accusations. He not only failed to differentiate between the executive tyranny and the so called judicial tyranny of the unelected. For me, I shall always pick the lessor evil. While so far as the constitution is concerned, Courts are not treading beyond their jurisdiction. They are only keeping a watch over the Executive inaction that is causing draconian miseries. This is the role constitution defines for them.

I therefore, fail to see why Mr. Salve has been so unsupportive of the efforts of the Civil Society and the Courts or are there some other compelling reasons?