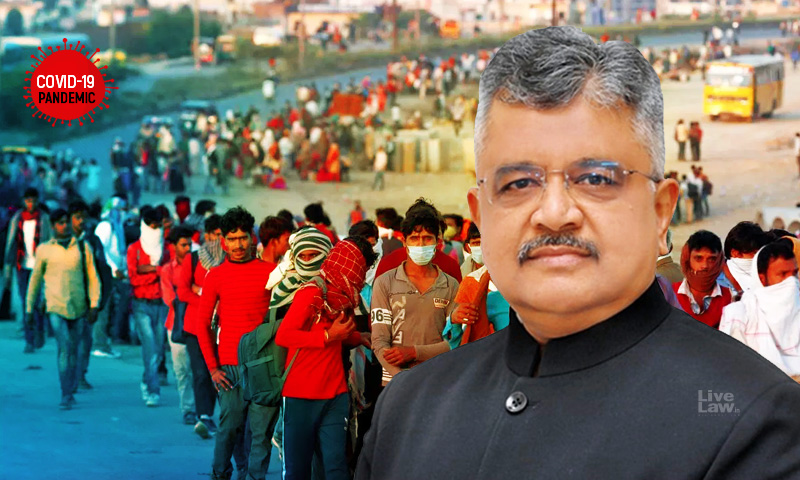 Taking note of the miseries of stranded migrants across the country, the Supreme Court on Thursday passed a slew of significant interim directions.The bench comprising Justices Ashok Bhushan, S K Kaul and M R Shah took up for hearing its own Suo Motu case pertaining to the miseries and problems faced by migrant workers along with PILs and intervention applications filed for purposes...

Taking note of the miseries of stranded migrants across the country, the Supreme Court on Thursday passed a slew of significant interim directions.

The bench comprising Justices Ashok Bhushan, S K Kaul and M R Shah took up for hearing its own Suo Motu case pertaining to the miseries and problems faced by migrant workers along with PILs and intervention applications filed for purposes of safeguarding rights of Migrant workers during lockdown.

Solicitor General Tushar Mehta appeared for the Centre and apprised the Court at length regarding measures taken by the Central & State Governments.

During the hearing, Solicitor General stated that while the Centre is extremely grateful to the Supreme Court, he had a complaint which was imperative to come on record as his submission in capacity as "an officer of the Court".

Mehta emphasised that there were in fact some elements within the country who were adamant on spreading "misinformation" about the migrant crisis. "Some isolated, limited instances [of the migrant crisis] are being shown repeatedly. These tend to have a deep impact on the human mind" added the Solicitor General.

Mr. Mehta reflected upon the "discourteous" behaviour and unpatriotic furore by certain segments in the society towards an unprecedented humanitarian crisis.

He designated these individuals as "Prophets of Doom".

SG: I have something more to say as an officer of the court. Have a complaint. There are some media reports and some people - two complaints I want to register. "There are prophets of doom who keep spreading Misinformation. Not showing courtesy to the Nation."

Adding to the above, Solicitor General emphasised that the Centre was doing its level best to manage this "unprecedented crisis" but some naysayers have been spreading negativity.

He stated that there was a complete lack of acknowledgement of the efforts of the Ministers and officials working day and night by "Arm Chair" intellectuals.

Further to this, the Solicitor General drew a corollary between the story of the famous photograph "The Vulture & the Little Girl" and the alleged "Prophers of Doom" in India.

He stated that a photographer Kevin Carter went to a famine-stricken Sudan in 1983. Carter photographed a vulture who was waiting for the child to die. His photograph, after being published in New York Times was awarded the Pulitzer Prize. However, Carter committed suicide after four months.

"... a journalist had asked him - what happened to the child? He said I don't know, I had to return home. Then the reporter asked him - how many vultures were there? He said one. The reporter said - no. There were two. One was holding the camera...."

Highlighting the above instance and metaphorically drawing an analogy between Carter and people who were criticising the Government's actions, Solicitor General urged that the Top Court must not not be used for perpetuating "political agendas". Vehemently arguing against the intervenors who have drawn similarities between the ADM Jabalpur incident & the alleged lack of stronghold by the Government & Judiciary, SG Tushar Mehta added that the "Arm Chair Intellectuals" consider the Court neutral only if it abuses the executive.

"For these arm chair intellectuals, Lordships are neutral only if they abuse the executive. If a handful of people want to control the institution, then it will become an ADM Jabalpur incident. All these people wanting to intervene need to apply the vulture and child story..."

Urging the intervenors in the instant issue, Solicitor General called for an insight into their contributions during the migrant crisis.

SG: "Those who come before your Lordships, let them establish their credentials. They earn in crores. Have they spent a penny? People are feeding people on the streets. Had any of them cared to come out of their AC offices?The question to ask is, What have they contributed? Your lordships must ask them to file an affidavit on their contribution? Except for writing on social media, penning articles, giving interviews? People are working tirelessly. From the safai karam charis to the PM"

Subsequently, when Senior Advocate Kapil Sibal began arguing, Solicitor General interjected and prayed that the Humanitarian Crisis not be used for "Political agenda's"

It was here that Solicitor General asked Sibal about his contributions towards the crisis.

Sibal to SG: It's a humanitarian crisis. Nothing to do with politics. Don't make it personal.

SG: This forum should not become a political platform.

Sibal: it's a humanitarian crisis.

SG: What's your contribution in the crisis?

The SG also commented that some "High Courts were running parallel governments".

The matter(s) have been adjourned till June 5.

SG: In many cases there is local level instigation which is encouraging people to start walking. Those who started walking, when the state found them, the bus goes to them immediately and takes them to the nearest railway station.#MigrantWorkers