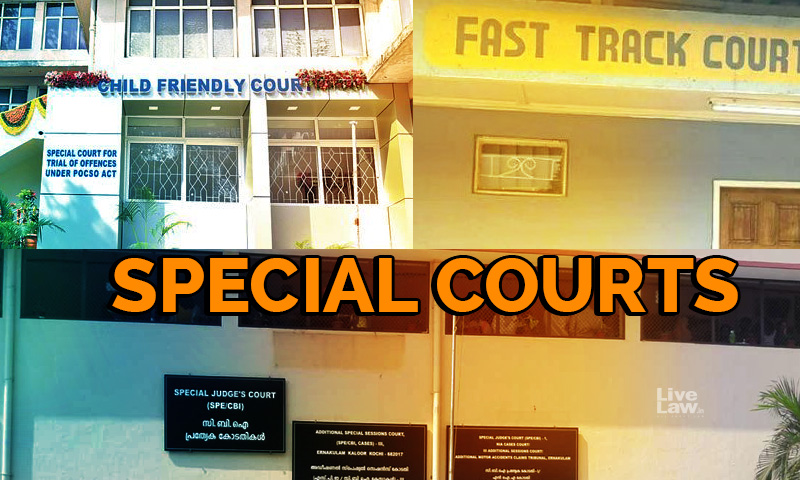 The Supreme Court of India, by an Order dated 01.11.2017 in a Public Interest Litigation, had mooted a "Central Scheme for setting up of Courts exclusively to deal with criminal cases involving political persons on the lines of the Fast Track Courts". This, subsequently, led to the setting up of "Special Courts" to deal with the criminal cases against Members of Parliament and Members...

The Supreme Court of India, by an Order dated 01.11.2017 in a Public Interest Litigation, had mooted a "Central Scheme for setting up of Courts exclusively to deal with criminal cases involving political persons on the lines of the Fast Track Courts". This, subsequently, led to the setting up of "Special Courts" to deal with the criminal cases against Members of Parliament and Members of Legislative Assembly. According to the proceedings before the Supreme Court in this case, it is estimated that at least 1581 cases were sought to be transferred to these Special Courts for expeditious conduct of trial and the progress being monitored by the Supreme Court. Notwithstanding the functioning of these Special Courts, a recent Report, submitted by the Criminal Rules Committee of the Madras High Court in the same case, has raised serious questions regarding the legal basis of these courts. The Supreme Court may now be required to consider and settle these questions of law as a matter of urgency before proceeding further.

The constitution of these Special Courts find basis in the Order dated 01.11.2017 issued by Mr Justice Ranjan Gogoi and Mr. Justice Navin Sinha while hearing arguments in Ashwini Kumar Upadhyay vs Union of India W.P. (Civil) No. 699 of 2016. A subsequent Order dated 14.12.2017 in the same case directed the proportionate allotment of Rupees 7.80 crore from the Central Government to various State Governments, in consultation with High Courts, for setting up 12 Special Courts across the country under the "Scheme". The High Courts were further directed to "trace out from the case records the particular case(s) pending in the files of the respective judicial officers under the jurisdiction" in order to transfer them judiciously.

Though the Scheme set out by these Orders seem well intentioned, the legality of these Special Courts have not been convincingly established. The Report filed by the Criminal Rules Committee of the Madras High Court ("Report") highlights three problematic issues:

1. Can Special Courts be "offender specific" or should they be "offence specific" in the context of the law laid down in State of West Bengal v. Anwar Ali Sarkar 1952 AIR 75?

2. Whether the entire State (of Tamil Nadu) can be considered to be a Sessions Division, as suggested in the Supreme Court directions, and whether this would be in conflict with the Code of Criminal Procedure?

3. Do the "Special Statutory Courts" constituted under various enactments such as Prevention Corruption Act, Scheduled Castes/ Scheduled Tribes (Prevention of Atrocities) Act, Prevention of Money Laundering Act, etc not have precedence to conduct trial over the Special Courts created via judicial and executive fiat, as in the present case?

In addition to these, there are a number of practical difficulties which have been experienced by litigants, practitioners and judicial officers on a daily basis, such as:

As such, a great degree of ambiguity continues to prevail after two years of Special Courts coming into existence. Recently, while hearing the arguments in the PIL, on 06.10.2020 the Supreme Court directed all the High Courts to provide information on the number of Special Courts for MP/MLA in a prescribed format to provide more clarity on rationalizing exercise. It was in response to this, that the Criminal Rules Committee of the Madras High Court comprising of Mr.Justice P.N.Prakash, Mr.Justice G.Jayachandran and Mr Justice N.Sathish Kumar raised the issue of constitutional validity of the Special Courts for MPs/ MLAs designated to try criminal cases against MPs/MLAs in fast track mode.

Having examined the issue and various Orders issued thereunder, the Criminal Rules Committee has recommended that the Orders for constituting Special Courts in Tamil Nadu should be recalled. They have further suggested that though the "part heard" cases could be completed before these Special Courts, they need not make over any more new cases to the Special Courts. They have also placed a request to revisit the portfolio of one judge exclusively hearing MP/MLAs cases and suggested that if these measures are followed in letter and spirit, the Supreme Court's objective of decriminalization of Legislature could be achieved.

There is no doubt that legal issues raised by the Criminal Rules Committee need to be dealt with immediately. The action of the Supreme Court tracing its powers of forming such courts to the Supreme Court itself has brought into focus the underlying legality and the constitutionality of such courts. The fact that there are already Statutory Special Courts under many Acts such as SC/ST Act, POCSO Act and Prevention of Corruption Act and the question of which court – Statutory Special Court or Special Court as set up from the Order dated 01.11.2017 - should try the matter when there is a conflict of jurisdiction has not been resolved.

At the heart of this conundrum, lies the constitution of Special Courts through judicial orders. By treating politicians as a separate class of people for trial of criminal cases, these measures may be in violation of Article 14 of the Constitution. Even after the constitution of Special Courts, in many states such as Kerala, Gujarat, Meghalaya, Telangana, Punjab & Haryana amongst others, all the cases from respective Statutory Special Courts have not been transferred while some other states such as Maharashtra, Tamil Nadu and Chhattisgarh have transferred it to the Special Court for MP/MLAs. As such, this would lead to an anomalous situation wherein politicians from different States are treated differently.

While the Supreme Court has been quick to perform its duty as the watchdog against political corruption, including reforming the electoral processes through the PUCL vs Union of India and Common Cause vs Union of India cases, the highest Court must also not give up its role as sentinel qui vive with regard to fundamental rights. It is incumbent upon the constitutional Courts to quickly redress and rectify any legal errors which go to the root of the criminal jurisprudence of our country. As such, the Report of the Criminal Rules Committee have raised issues that are foundational to the constitution and functioning of the Special Courts. Now, it is the solemn duty of the Supreme Court to immediately resolve these issues before legal challenges pile up on this subject.

(Authors are practicing Lawyers at the Madras High Court)