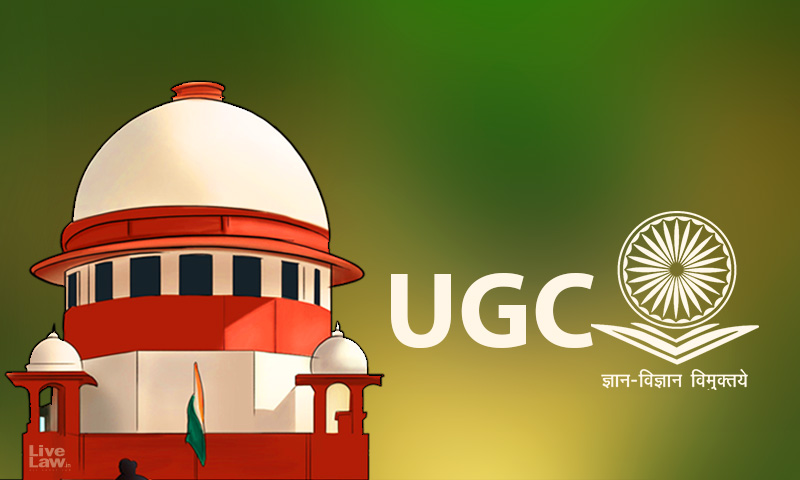 On 6 July 2020, the University Grants Commission ('UGC') released guidelines directing all colleges, universities and institutions of higher education to conduct final year/ terminal semester examinations before 30 September 2020 ('Guidelines'). These Guidelines had been released at a time when the number of COVID-19 cases continued, and still do, to increase exponentially with every passing...

On 6 July 2020, the University Grants Commission ('UGC') released guidelines directing all colleges, universities and institutions of higher education to conduct final year/ terminal semester examinations before 30 September 2020 ('Guidelines'). These Guidelines had been released at a time when the number of COVID-19 cases continued, and still do, to increase exponentially with every passing day; and have added to additional stress on universities, colleges and students across the country. Naturally, several petitions were filed before the Supreme Court ('SC') challenging these Guideline on several grounds, which were all collectively heard and decided by a three-judge-bench in Praneeth K and Ors. v. University Grants Commission [Writ Petition (Civil) No.724 of 2020] ('Praneeth') on 28 August 2020.

Among other things, two constitutional questions were raised against the Guidelines before the SC: first, whether the UGC demanding Universities to conduct examinations under Section 12 of the University Grants Commission Act, 1956 ('UGC Act') were referable to Entry 66, List I, Seventh Schedule ('E-66') of the Constitution of India ('Constitution'); and second, whether the Guidelines violated the rights of students under Articles 14 and 21 of the Constitution. Not only does the SC – in its 160-page judgment – fail in its duty to logically appraise the existing position of law, it also adopts a surprisingly un-empathetic approach towards the plight of the students . Furthermore, the judgment has also created friction within the existing framework of law. This essay examines the two constitutional questions enumerated above.

E-66 and 'standards of education'

The first issue was whether the Guidelines prescribed under Section 12 of the UGC Act were beyond the UGC's competence referable to E-66. E-66 reads as follows:

The SC, inter alia, looked at the meaning of 'standards for education' – within the meaning of E-66 – through a catena of decisions and proceeded to determine whether the Guidelines also fell within the gamut of the entry. Section 12 of the UGC Act allows the UGC to undertake steps 'for the determination and maintenance of standards of teaching, examination and research in Universities', and the impugned Guidelines were issued under this provision. For the SC, use of the term 'examination' under Section 12 meant that the UGC is permitted by law to demand universities to conduct examinations through the Guidelines vide E-66 – as it stimulates coordination and determination of the 'standards of education', which also includes 'standard of examination'. The SC understood Section 12 in light of the preamble of the UGC Act, and held that the phrase 'standard of examination', under Section 12, fell in line with the phrase 'standard of education' within the language of E-66, thus ruling in favour of the UGC (Praneeth, paras.57, 62).

This means that 'standard of education' under E-66 speaks of the 'quality' (as a synonym for 'standard') of examinations. Therefore, the standards of questions in an exam, their difficulty levels, who would correct and formulate the questions, and other aspects of like nature would ideally fall within the bracket of 'standard of examinations' as a taxonomy of 'standard of education' under E-66. But here, the Guidelines do not alter the examinations' character to further 'coordination or determination' in 'standards of education'. They merely mandated the Universities to organise and complete them before 30 September 2020. In this light, SC's conclusion that the Guidelines are in consonance with E-66 through Section 12 of the UGC Act is far-fetched and, at best, incorrect.

The petitioners also relied on the SC's decision in Modern Dental College v. State of MP [(2016) 7 SCC 353] ('MDC') – where it was categorically observed that 'standard of education…would not include conducting of examinations' as it does not affect any 'standards' – to establish that the Guidelines issued under Section 12 are not in referable to E-66. In MDC, the SC was, inter alia, tasked to determine whether 'admissions' were covered exclusively under E-66. While answering the question in the negative, the SC passingly noted that mere conduction of examinations would not be included under E-66 (MDC, para.101). However – and it is submitted, incorrectly – the SC rejected this assertion by the petitioners by distinguishing MDC on facts; and in their quest to do so, they observed the following:

62. The Constitution Bench in paragraph 101 has used the expression 'not include conducting of examination etc.' In the present case, there is no claim on behalf of the UGC that it is the UGC which shall conduct the examination of the graduate and postgraduate students. The examinations are to be conducted by the respective Universities only. The above observations made by Constitution Bench in paragraph 101 as relied by learned senior counsel for petitioner, cannot be treated to be laying down any preposition that University Grants Commission has no competence to lay down any standards with regard to examination.

This clearly misses the point. Put simply, the petitioners never argued that the UGC could not conduct the exams. The petitioners rather argued against the Guidelines being in furtherance of coordination of determination of the 'standards of education' vide Section 12 of the UGC Act – which essentially meant that the UGC could not demand/force colleges to conduct examinations within a deadline. Demanding colleges and universities to merely conduct 'examinations' would not lay down the standards of how exams are to be conducted, in the sense that they do not alter the quality or determining principles surrounding the examinations. Thus, the SC's misinterpretation (of arguments and law) led them to go beyond what E-66 has been historically interpreted to mean, and creates friction within the existing position of law. However, considering that the decision was specifically in regards to Section 12 of the UGC Act, a future bench might yet distinguish its reasoning on facts.

The petitioners also contended that the Guidelines violates the students' rights under Articles 14 and 21 of the Constitution. For the petitioners, prescribing a single date deadline for examinations throughout India treated 'unequals as equals', which amounted to an Article 14 violation. And in light of the exponential rise in the number of COVID 19 cases, it was contended that 'lakhs of students, teaching and nonteaching staff will be forced to risk their health and lives of their family members if they are asked to participate in the Final year/ Terminal examination' (Praneeth, para.76). The SC rejected both the contentions as follows:

First, for them, the UGC 'rightly' fixed a common deadline to maintain uniformity in the academic calendar and that their decision was taken after careful assessment of the situation throughout the country, which ensured the 'welfare of students' and protected the 'career prospect' of final year students. To them the 'criticism' of the Guidelines 'that they are unreasonable does not inspire any confidence.' (para.74-5).

Second, clause 6 of the Guidelines required Universities to 'carry out the academic activities following necessary protocols/guidelines/directions/advisories issued by the Central/State Governments and MHRD/ UGC from time to time, in view of COVID-19'. This took the SC to the official memorandum ('OM') released by the HRD Ministry on 6 July 2020, which laid down the standard operating procedures universities and colleges would follow while conducting examinations. Upon reading the Guidelines read with the OM, the SC found it to be 'abundantly clear that UGC, MHRD … are fully concerned with the health of all stakeholders' and led them to the conclusion that Article 21 was not in violation (paras.81-2).

At the onset, one notes that the court rejected the argument by stating that the Guidelines were not 'unreasonable' or 'manifestly arbitrary'. Article 14 concerns 'equality' before law, and courts must ideally acknowledge that the impugned law leads to unequal treatment before deciding whether such treatment was 'reasonable' or not; and they clearly did not do so although such treatment is violative of Article 14. Further, it is bewildering how setting one uniform date throughout the country for examinations was enough to treat unequals as equals in a reasonable way. UGC governs over thousands of colleges and several hundred universities throughout India, and not all those institutions would have students socially and economically capable of travelling to different cities for giving examinations, or afford safe means of transportation . This would, as the Delhi High Court in Madhu v. Northern Railway [2018 SCC OnLine Del 6660] has observed, have a 'disparate impact' on the disadvantaged students or lead to an operational inequality (also, Griggs v. Duke Power Co., 401 U.S. 424, 431 (1971) and here). The SC inability to consider this issue through the aforementioned lens reflects a serious gap in reasoning, and a lost opportunity.

Further, the SC's assessment of Article 21 was flawed, as their decision seems to have given precedence to the concerns raised by Government functionaries without actually appraising whether the life and personal liberty under Article 21 is at a threat of violation – which is an accepted ground for filing an Article 32 petition (and seems to have been the case here). Their reliance on the OM is further impeachable as it overlooks the risks students would be exposed to when they travel from one place to another to appear for the final year exams. The OM only lists the protocols colleges and universities are to follow after the students enter inside the campus to give their examinations. It does not consider the risks they would be exposed to before or after that – considering that many students would have to cross borders and cities to appear for their exams in person. The SC should have considered the ground realties that students would be confronted with – many of them have returned to their hometowns and would find it difficult to travel during times as transportation is a risky affair during an ongoing pandemic, thereby prima facie posing a threat to their lives and personal liberties.