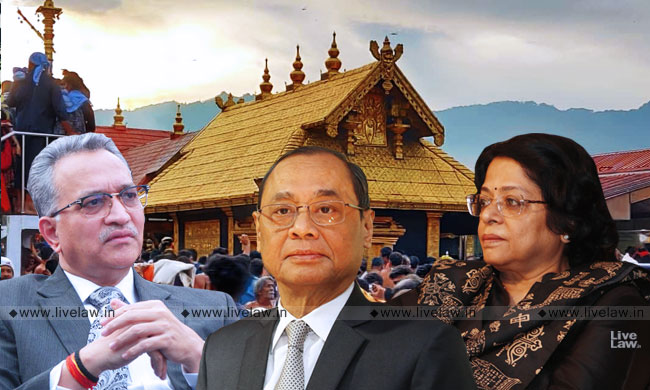 According to CJI Ranjan Gogoi, Shirur Mutt held that what are essential religious practices of a particular religious denomination should be left to be determined by the denomination itself. But later, Durgah Committee carved out a role for the court in this regard to exclude what the courts determine to be secular practices or superstitious beliefs.

This article would explore these judgments and examine the 'apparent conflict' between them.

Shirur Mutt: Essential Religious Practices To Be Ascertained With Reference To Doctrines Of The Religion Itself

In this case (1954), a seven judge Bench considered a challenge to the Madras Hindu Religious and Charitable Endowments Act 1951, which empowered a statutory commissioner to frame and settle a scheme if they had reason to believe that the religious institution was mismanaging funds. Following observations made by Justice BK Mukherjea are relevant.

What constitutes the essential part of a religion is primarily to be ascertained with reference to the doctrines of that religion itself. If the tenets of any religious sect of the Hindus prescribe that offerings of food should be given to the idol at particular hours of the day, that periodical ceremonies should be performed in a certain way at certain periods of the year or that there should be daily recital of sacred texts or ablations to the sacred fire, all these would be regarded as parts of religion and the mere fact that they involve expenditure of money or employment of priests and servants or the use of marketable commodities would not make them secular activities partaking of a commercial or economic character; all of them are religious. practices and should be regarded as matters of religion within the meaning of article 26(b). What article 25(2)(a) contemplates is not regulation by the State of religious practices as such, the freedom of which is guaranteed by the Constitution except when they run counter to public order, health and morality, but regulation of activities which are economic, commercial or political in their character though they are associated with religious practices.

In Durgah Committee (1961), the court was concerned with a challenge to the Durgah Khawaja Saheb Act, 1955, which provided for the constitution of a Committee to manage a Muslim Durgah. In the said judgment, Justice Gajendragadkar observed:

The judgment of CJI Misra notes that in Shirur Mutt (supra), for the first time, held that what constitutes an essential part of a religion will be ascertained with reference to the tenets and doctrines of that religion itself. Referring to law laid down in Shirur Mutt (supra), Justice Misra held that the devotees of Lord Ayyappa do not constitute a separate religious denomination. Justice Misra also quotes the 'note of caution' from Durgah committee. Justice RF Nariman also quotes extensively the observations in Shirur Mutt judgment.

The Court ruled that the freedom of religion guaranteed by the Constitution applied to freedom of both religious belief and practice. To distinguish between the religious and the secular, the Court looked to the religion itself, and noted that the views of adherents were crucial to the analysis of what constituted 'essential' aspects of religion.

In Shirur Mutt, the autonomy to decide what is essential to religion was coupled with the definition of religion itself, which was to comprehend belief and practice

It was also noted that Shirur Mutt was followed in Ratilal Panachand Gandhi v State of Bombay and Sri Venkataramana Devaru v State of Mysore.

This statement pushed the essential religious practices doctrine in a new direction. The Court distinguished, for the first time, between 'superstitious beliefs' and religious practice. Apart from engaging in a judicial enquiry to determine whether a practice claimed to be essential was in fact grounded in religious scriptures, beliefs, and tenets, the Court would 'carefully scrutinize' that the practice claiming constitutional protection does not claim superstition as its base. This was considered a necessary safeguard to ensure that superstitious beliefs would not be afforded constitutional protection in the garb of an essential religious practice. The Court also emphasized that purely secular matters clothed with a religious form do not enjoy protection as an essential part of religion.

Durgah Committee and Saifuddin established the role of this Court in scrutinizing claims of practices essential to religion in order to deny constitutional protection to those practices that were not strictly based in religion. Ascertaining what was "essential" to a religious denomination "according to its own tenets" required a scrutiny of its religious texts. Durgah Committee laid down that the court would 'carefully scrutinize' claims to deny constitutional protection to those claims which are religious but spring from superstitious beliefs and are not essential to religion. Saifuddin laid down that a practice grounded on an obnoxious social rule or practice may be within the ambit of social reform that the State may carry out. This view infuses the doctrine with a safeguard against claims by religious denominations that any practice with a religious undertone would fall within the protection afforded by Article 26(b) to them to 'manage its own affairs in matters of religion.'

In Durgah Committee, Justice Gajendragadkar sought to justify the exercise of that adjudicatory function by stating that otherwise, practices which may have originated in "merely superstitious beliefs" and would, therefore, be "extraneous and unessential accretions" to religion would be treated as essential parts of religion.

Observations of Gajendragadkar in Durgah Committee are Obiter: HM Seervai

The dissent by Justice Indu Malhotra noted that H.M. Seervai, Constitutional expert and jurist, in his seminal treatise titled 'Constitutional Law of India: A Critical Commentary', had remarked that the observations of Gajendragadkar, J. in Durgah Committee are obiter. Commenting on Durgah Committee, Seervai had stated thus:

"The above obiter runs directly counter to the judgment of Mukherjea, J. in the Shirur Mutt Case and substitutes the view of the court for the view of the denomination on what is essentially a matter of religion. The reference to superstitious practises is singularly unfortunate, for what is 'superstition' to one section of the public may be a matter of fundamental religious belief to another."

Apparently, Justice Gogoi in Adi Saiva Sivachariyargal Nala Sangam vs. Government of Tamil Nadu (2015), observed that the exclusion of all "outside authorities" from deciding what is an essential religion practice must be viewed in the context of the limited role of the State in matters relating to religious freedom as envisaged by Articles 25 and 26 itself and not of the Courts as the arbiter of Constitutional rights and principles.

The difficulty lies not in understanding or restating the constitutional values. There is not an iota of doubt on what they are. But to determine whether a claim of state action in furtherance thereof overrides the constitutional guarantees Under Article 25 and 26 may often involve what has already been referred to as a delicate and unenviable task of identifying essential religious beliefs and practices, sans which the religion itself does not survive. It is in the performance of this task that the absence of any exclusive ecclesiastical jurisdiction of this Court, if not other shortcomings and adequacies, that can be felt. Moreover, there is some amount of uncertainty with regard to the prescription contained in the Agamas. Coupled with the above is the lack of easy availability of established works and the declining numbers of acknowledged and undisputed scholars on the subject. In such a situation one is reminded of the observations, if not the caution note struck by Mukherjea, J. in Shirur Mutt (supra) with regard to complete autonomy of a denomination to decide as to what constitutes an essential religious practice, a view that has also been subsequently echoed by this Court though as a "minority view". But we must hasten to clarify that no such view of the Court can be understood to an indication of any bar to judicial determination of the issue as and when it arises. Any contrary opinion would go rise to large scale conflicts of claims and usages as to what is an essential religious practice with no acceptable or adequate forum for resolution. That apart the "complete autonomy" contemplated in Shirur Mutt (supra) and the meaning of "outside authority" must not be torn out of the context in which the views, already extracted, came to be recorded (page 1028). The exclusion of all "outside authorities" from deciding what is an essential religion practice must be viewed in the context of the limited role of the State in matters relating to religious freedom as envisaged by Articles 25 and 26 itself and not of the Courts as the arbiter of Constitutional rights and principles.

It is also significant that, Durgah Committee judgment was quoted in other judgments of Constitution bench and three judge benches, which followed it. Perhaps for the first time, in March 2004, Justice AR Lakshmanan in his dissenting opinion in Commissioner of Police vs. Acharya Jagadishwarananda Avadhuta, sensed the conflict and opined thus:

"The obiter of Gajendragadkar, J. in Durga-Committee, Ajmer v. Syed Hussain Ali (supra) to the effect that the Court may have carefully scrutinized the practices to find out whether they constitute an essential or integral part of religion is not in line with the above decisions including that of seven Judges Bench in the case of Shirur Mutt (supra)."

Now essentially, the correctness of this dissent by Justice Lakshmanan will be examined by a Constitution Bench of Seven Judges.