Farmers Bill - Exposing The Lambs To The Wolves 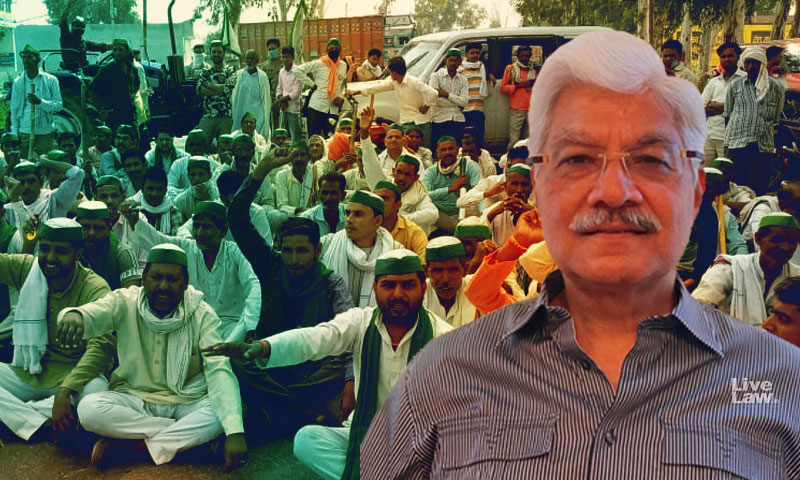 The purport of this analysis is to examine critically the implications of the passage in Parliament, of the Farming Bills, on the federal structure envisioned in our Constitution. Its impact on the State Mandi laws as well as on the issue of farmers welfare. It would also be worthwhile to assess the impact of the Bill on the demand of the farmers for a statutory minimum price to...

The purport of this analysis is to examine critically the implications of the passage in Parliament, of the Farming Bills, on the federal structure envisioned in our Constitution. Its impact on the State Mandi laws as well as on the issue of farmers welfare. It would also be worthwhile to assess the impact of the Bill on the demand of the farmers for a statutory minimum price to be guaranteed by law.

This Bill marks a serious departure from the past in dealing with sale, purchase as well as pricing of what is called "farming produce", another name for "agricultural produce" referred to in the existing State laws. Some of its salient features are:-

The hallmark of the Bill is that it completely sacrifices the interest of the farmers and leaves them at the mercy of the Sponsors. Evidently such agreements would be unconscionable including the price enforcement part. Besides Section 6(1) & (2) require conformity to specifications of quality etc., by the farmers. This places them entirely in the hands of the Sponsor and therefore would be a permanent handle for the harassment of the farmers.

It would also be relevant to analyze the local State Laws regulating the farming produce markets before we can assess the freedom to farmer that is being offered as bait. The principle objects of the State Mandi Laws were:-

Under the State Market laws there were adequate supportive measurers for the protection of the farmers and their produce. However the newly guaranteed freedom blows it all away leaving the marginal farmers mostly exposed to the exploits of the Sponsors.

Once the sponsors are allowed to make their purchases from outside the market yards the whole scheme under the State Market Act collapses. The Sponsors, which includes erstwhile traders of Markets, would be conducting their transactions outside the market yards of the Market Committees, free from their supervision and payments of market fee. The State laws, with their mechanism, were primarily intended to support the farmers realizing their weaker positions. The Bill by means of Section 7 completely takes away the welfare umbrella of the farmers under the State Acts. It gives overriding effect to the Bill with regard to farm agreements. Therefore it is as clear as daylight that this Bill conflicts with the State market laws. It therefore becomes necessary to examine whether the Farming Bills 2020, enacted under the Entry 33 list III of the Constitution, can possibly conflict with, repeal or override State law within its own plenary field under the State List II.

The conflict between a Central Law and a State Law, both within their respective fields, can be resolved only under Article 246 and not under the Article 254. For this purpose various principles of interpretation been evolved by the Courts over the years.

Mandi Act is an Act under Entry 14, 18 & 28 list II known as State list. The three Entries of 14, 18 and 28 completely cover this Act. The term 'Agriculture" in entry 14 is to be read widely, as are all the Entries. They would certainly include land, the agricultural operations, seeds etc., as well as the produce. It is for this reason the Mandi Acts define "farm produces" as "produce of Agriculture" . An interesting analogy in this regard can be had from Entry 24 list II – "Industry", which despite its wide appearance only covers manufacturing and not its product. The reason is that subsequently under Entry 26 & 27, trade and commerce, supply and distribution are separately specified. Unlike "industry", Entry 14 is comprehensive and also includes the agricultural produce, while sale and purchase of it would fall under Entry 28 list II – "markets and fairs". This Entry 28 is not subject to any other Entry either in the Concurrent List or the Union List and is therefore an independent as well as a plenary legislative power of the States. There is another way of looking at it. Entry 26 and 27 of list I are subject to entry 33 of list III which contains "foodstuff" on which Union can legislate. The Essential Commodities Act was one such Act of the Union under it. On the surface there may appear to be a clash or conflict between the State and the Union jurisdictions because the Farm Bills would be traced to Entry 33 list III. What happens where the Union attempts to regulate agricultural or farm produce as "foodstuff" while the States likewise regulate farm produce under their own plenary jurisdiction under Entries 14, 18 & 28 of List II. These entries are not subject to any other entry under any other list. The answer is a little complicated. Our Constitution envisages a federal structure under Article 1 & 246. The Federal structure envision a collaborative federalism based on the principle of balance and negotiation. Under the Federal structure prescribed in Article 246 (1) (2), both the State and the Union legislatures are supreme and sovereign possessing plenary powers. Parliament cannot either by law or even by exercise of its Constituent Power under Article 368, take away or abridge the States plenary powers in its own exclusive list as herein. The three State entries 14, 18 and 24 are plenary and independent. The question would again arise that what would happen when the States under its own Entries 14 and 28 regulate the sale and purchase of the food grains produced by the farmers in their fields, while the Centre in its own way tries to tamper or countermand the States mandate, partly or wholly by enacting a law on foodstuff under Entry 33 List III.

This question can only be resolved keeping in view the Federal structure of our Constitution and the rules of interpretation evolved and applied in such cases of conflict. The foremost consideration are:-

Judging from this angle there can be no doubt that entry 14 and 28 would include "food grain produced by the agriculturists" till they are sold by the farmers in the markets. Thereafter its colour changes and it goes into list III as "foodstuff". Before such sale they would remain as "farming produce" covered under the State Entries 14 & 28. The definition of "farming produce under Sectrion 2(h) of the Bill is unduly wide and along with Section 3 to 6 of the Farm Act, encroaches into States Jurisdiction. That apart there is Section 7(1) in the Bill that throws the State Act overboard. The Bill destroys the entire regulatory mechanism of the Mandi Adhiniyam as narrated above. Take the case of a trader/commission agents who may now under the new Bills don the robes of a "Sponsor", by entering into agreements with the farmers for the purchase of their produce. He can do the transactions outside the "area specified" in the market yards for sale and purchase of farm produce. This demolishes the very objective of creating a market area or market yard and the objective of regulating sale and purchase of farm produce in the interest of the poor farmers. The Market Committees get destroyed as their major source of revenue would dry up. When transactions start happening outside the market yard then none would come up to pay the prescribed market fee. The entire development of local markets, its infrastructure and facilities as well as the surrounding supporting infrastructure would cease. The Spirit of State Act is destroyed leaving it high and dry.

This is the greatest heresy to our federal structure. A valid State law within its own field is given a slow burial by a Central Law allegedly in its own field. Those who believe in the validity of this Bill are disbelieving the federal character of our Constitution.

There are large number of authoritative pronouncement of the Supreme Court that:-

Apart from the erosion of the federal structure, the new Bills mark a serious departure from the welfare orientation of our Democratic structure. These Bills seem to ignore Article 39(a-c) as well as Article 48 of our Constitution. They seem to sacrifice the welfare of the farmers under the ruse of freedom. It make me wonder where is the promise of granting minimum support price to the farmers based on Swaminathan formulae of "composit cost". A yet another "Jumla"

Those who advocate freedom to the farmers under the Bills overlook that apart from the farm produce the farmers have no other source of livelihood to bank on. They have to sell as soon as possible since the farm produce are mostly perishables. There are nearly 146 Million marginalized holdings, highly fragmented and are clearly not enough to sustain the farmers. The Bills cannot give the farmers freedom of choice until, they can bank on some external support or protection, be it in the form of some package like universal basic income. The moment they get some kind of external support, regulatory or otherwise, that their bargaining and negotiating power increases. It is then only they can begin to enjoy the much touted freedom. In the absence of such an external support they would have no option but to sell at the price dictated by the Sponsors, who can profiteer by pressing the farmers hard. They have the expertise as well as other tools to enhance their bargaining power. Cartelization is one such very old and recognized tool to depress the prices of the farm products in the hands of farmers. What protection do the farmers have? The Farm Bill completely exposes them to the whims of the Sponsors. The complementing Farmers Produce, Trade and Commerce Bill 2020 hardly facilitates the farmers beyond the Farm Bill. In fact all that the Bills do is to destroy all the protection that was given to the farmers under the State Market Laws realising their weaker expositions. The protections have vanished completely yet we are told that the farmers would be free. Free from the States may be, but not from the seasoned Sponsors

Those who talk of freedom to farmers under the new dispensation are completely oblivious of the ground realities in relation to marginal farmers. In the presence of totally uneven bargaining power, the farmers will only rue their freedom in future. It is not important as to who had said or promised what, earlier. These can be issues of debates "inter partes" in the politicized media, but the value and scope of freedom can only be assessed in the light of the security which the farmers have. Otherwise freedom is a mere chimera floated as a ruse to hide the vile character of the Bills. To those who believe that there is freedom guaranteed to the farmers of "option and bargain", I would say the reality seriously questions this belief. We, in a welfare democracy are completely exposing the lambs to the wolves.

(Author is a Senior Advocate at the Supreme Court of India)