Ranjan Gogoi's Allegations Against Justice AP Shah: What Is The Truth? 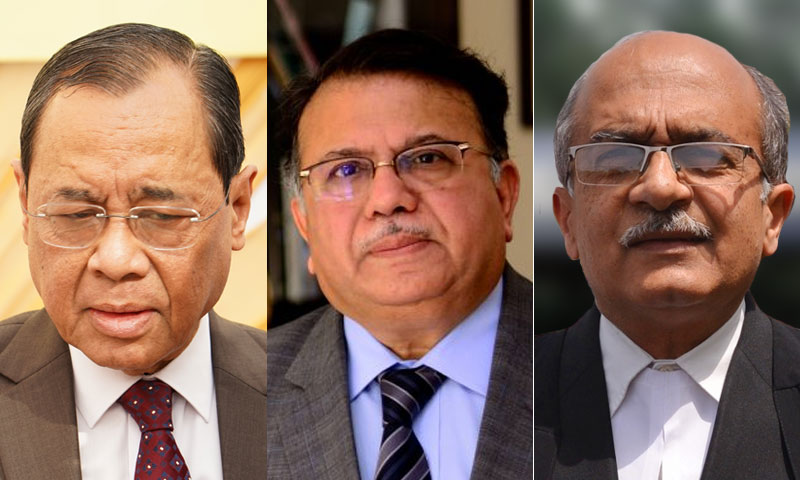 Faced with a barrage of criticism from a number of former judges, many of whom had been his colleagues, such as, Justices A.K. Patnaik, J. Chelameswar, M. Lokur, K. Joseph and A.P. Shah, for accepting a Rajya Sabha seat from the government soon after his retirement, and after having delivered several important judgements like Ayodhya, Sabrimala, Rafale to the government, Justice Gogoi...

Faced with a barrage of criticism from a number of former judges, many of whom had been his colleagues, such as, Justices A.K. Patnaik, J. Chelameswar, M. Lokur, K. Joseph and A.P. Shah, for accepting a Rajya Sabha seat from the government soon after his retirement, and after having delivered several important judgements like Ayodhya, Sabrimala, Rafale to the government, Justice Gogoi has defended himself by mounting an offensive against his former colleagues and judges and against what he calls a "lobby" of lawyers, in which he named myself and Mr. Kapil Sibal.

He accused me of questioning the appointment of Alok Verma as CBI Director and later questioning his dismissal in the mid night coup by which he was removed. The fact is, we had gone to court to question the appointment of Rakesh Asthana, as the Acting Director, CBI, after Ranjit Sinha retired, and the non appointment of a regular Director CBI, through the selection committee comprising of Prime Minister, Leader of Opposition in the Lok Sabha and Chief Justice of India. It was only after the Supreme Court forced the government to appoint a regular Director, that Alok Verma was appointed. We never questioned his appointment but only sought copies of the minutes of the meeting in which he was selected. Thereafter, when Alok Verma was removed, we challenged the removal. Even though Gogoi as Chief Justice was himself in the High Powered Committee which was to approve Verma's removal, he heard the matter on the judicial side, and finally delivered a judgement just on the eve of Verma's retirement by reinstating him, but referring the matter back to the High Powered Committee (by asking Justice Sikri, who was not the next senior most after him, to represent him), to approve his removal. The government promptly moved the committee the same day of the judgement and which then approved Verma's removal. Gogoi now says that Alok Verma was a good officer whose midnight illegal removal Gogoi did not stop!

Regarding his colleagues Justices Madan Lokur and Kurian Joseph, Gogoi says they have failed ambitions, though they were his good friends. It is indeed remarkable that he so casually accuses his colleagues of failed ambitions even though they worked with him for more than six years in the Supreme Court and participated in the Press Conference of January 2018 with him. Once these were appointed to the Supreme Court after Gogoi, obviously they knew that Gogoi would become Chief Justice and they would not. Where was the question of failed ambitions, unless Gogoi is hinting that they were also hankering for a Rajya Sabha seat and the government gifted it to him alone? These allegations against two of the most upright and conscientious judges, is petulant, arrogant and absurd.

He goes on to make serious charges by innuendo against Justice AP Shah, former Chief Justice of Madras and Delhi High Courts. He says there were complaints against him, regarding "an actress" and regarding two property cases. He said these were on record and exhorted his interviewer to obtain it under RTI (from the Supreme Court obviously). He did not disclose that on 5th August 2019, a Supreme Court reporter, Dhananjay Mahapatra, had in an article, mentioned these same allegations as made by Gogoi, stating that they were contained in a complaint by some Madras Advocates to then Chief Justice of India, which then stopped Justice Shah's elevation to the Supreme Court. Mahapatra wrote this while referring to Justice Shah's lecture titled "Judging the Judges: need for transparency and accountability", in which Justice Shah had extensively referred to Gogoi's case of sexual harassment. Mahapatra did not detail the substance of the charges. However Justice Shah in a stinging riposte stated, "he relies upon a letter that he claims was allegedly sent in 2008 by some lawyers to the then CJI which supposedly cast aspersion on my character. He also adds that only a limited number of persons knew of this letter and the then CJI took no action. On my part, this is the first time I have heard of such a letter and in any event I deny all the allegations made by your reporter with all the contempt that it deserves. One would have thought that Mr. Mahapatra would have stuck to basic journalistic principles of verifying sources and checking facts and asking for an opinion from the other side before filing a report. None of these were done". It suffices to say that the complaint was never acted upon by any Chief Justice nor was Justice Shah sent a copy of that complaint at any stage, for his response. Yet Gogoi tells his interviewer that she can obtain this complaint under RTI, at a time when the Supreme Court refuses to share any information regarding assets of judges, pending judgements, minutes of collegiums meetings on appointments, etc. under RTI!

The only case of any actress that Justice Shah dealt with was a case involving multiple complaints made against the actress Kushboo, for some remarks she had made about pre marital sex. Justice Shah had stayed those multiple complaints, which were thereafter quashed by the Supreme Court. Of the property cases, one appears to be a reference to the sale of a hospital and its land by the Kanchi Kamakoti Peetam, a charitable trust. The trust originally wanted to sell it to M/s. Chettinad Hospitals at an offer price of 105 crores, which was declined by a single judge of the Madras High Court. On appeal, a division bench headed by Justice Shah, ordered it to be put on sale by way of a public auction with advertisements in prominent newspapers. The two highest bidders were M/s. Global Hospital, a reputed company running a chain of hospitals, which made a bid of 257 crores and M/s. Shriram Properties, a reputed real estate company, which made a bid of 265 crores (later increased to 280 crores). However since the hospital and land belonged to a charitable trust that intended to run the hospital in a suburban area to meet the needs of the villages close by, the sale was intended to be to an entity that satisfied that requirement to the greatest extent. Justice Shah's bench while granting the sale to M/s. Global Hospitals, imposed a condition that the hospital would have to be run for charitable purposes and not be used for real estate and that at least 50 beds would have to be reserved for poor patients without payment. It must be noted that the real estate company did not agree to these conditions though later they came with a plea that they would enter into some partnership with Manipal Hospital to run it as a hospital but since they contemplated making improvements, they would be unable to run the existing hospital. These conditions were not accepted by Justice Shah's bench, also because there was no credible evidence to suggest that Manipal Hospital would actually run the hospital and therefore the sale was allowed to M/s. Global Hospitals. I have read the orders passed in this case, which make it clear that the trust agreed to this order. No appeal was filed against this order and the order became final. The proceedings of this case were widely reported in the media. This case appears to be, according to Gogoi, an instance of Justice Shah clandestinely allowing the sale of property for a song!

It is not clear what the other property case which Gogoi mentions, but certainly, none of these charges have ever been put to Justice Shah. Justice Gogoi's offensive remarks against Justice Shah are not just baseless and defamatory, but scurrilous and by innuendo. As a former Judge he ought to know that even if he were speaking on the basis of some allegations made in a letter by some advocates to the then Chief Justice (which were never put to Justice Shah nor inquired into by anybody), any public accusation made on the basis of such a letter is not only reckless but defamatory. It is civil as well as criminal defamation.

Gogoi has not merely been guilty of accepting a gift of a Rajya Sabha seat by the government after retirement, but has been guilty, as Jutice Lokur has detailed in a recent article, of three egregious acts which have compromised the independence of the judiciary – 1. Evolving a sealed cover jurisprudence by which he repeatedly sought, accepted and used information conveyed to him by the government, in unsigned notes in sealed covers (which were not even shared with the opposite party) and many of which turned out to be factually incorrect (as was evidenced in the Rafale case). This sealed cover jurisprudence violates every principle of law and natural justice and allows the court to decide cases behind the back of one of the parties, without even sharing any information used as the basis of the judgement. 2. Prioritising and hearing/not hearing of cases on the wishes of the government. 3. Appointment and transfer of judges on the wishes of the government.

It is true that I applauded Gogoi when he participated in the 2018 press conference to highlight the abuse of the master of roster power to fix benches by the then Chief Justice, Dipak Misra. I also applauded his Goenka lecture where he said the country needs not just noisy journalists and independent judges but also independent journalists and noisy judges. But immediately after becoming Chief Justice and sexually harassing a staffer, he sat in the governments lap and not only abused his power as master of roster in the same manner as his predecessor but also did the things mentioned above to destroy the independence of the judiciary. In the end he turned out to be what Arghya Sen Gupta called him in his recent article, 'a virus in robes'. He will be remembered in history as the Chief Justice who reduced the reputation of the Hon'ble Supreme Court to being an executive court.