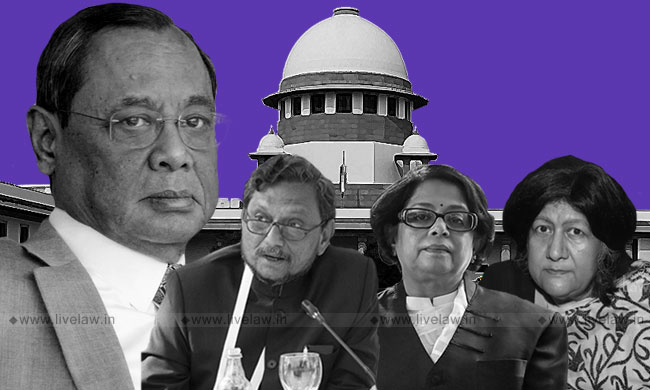 The clean chit given by the Supreme Court in-house panel to the Chief Justice of India in the sexual harassment allegations raised by a former Court employee has attracted a lot of criticism from several persons in legal fraternity.The complainant woman had refused to participate in the proceedings before the panel of Justices Bobde, Indu Malhotra and Indira Banerjee on the ground that several...

The clean chit given by the Supreme Court in-house panel to the Chief Justice of India in the sexual harassment allegations raised by a former Court employee has attracted a lot of criticism from several persons in legal fraternity.

The complainant woman had refused to participate in the proceedings before the panel of Justices Bobde, Indu Malhotra and Indira Banerjee on the ground that several of her concerns, such as denial of assistance by a lawyer, lack of clarity in procedure, demand for video recording of proceedings etc, were not addressed by it.

In a press release, she said that she felt "intimidated and nervous in the presence of three Hon'ble Judges of the Supreme Court and without having a lawyer or support person".

Despite the woman walking out of the enquiry, the panel proceeded ex-parte, and found that there was no substance in the allegations against the CJI.

Certain public reactions to this development are given below :

Former Chief Justice of Delhi High Court Justice A P Shah has commented that he was "extremely disturbed by how this enquiry has been held" and added that the process has ended in a "complete mockery of justice".

"I am extremely disturbed by how this inquiry has been held. Initially it seemed as though the Supreme Court was looking to remedy the situation brought about by the extraordinary hearing. Ideally the probe should have been conducted by an external committee, but to compensate, the court added two women judges into the committee. But even so, in no sense can this be called an inquiry. And what followed did not help much either", he said in an interview to Indian Express.

"All that the woman asked for was to be represented by a lawyer or a friend. This was a very basic, and in my view, a reasonable request, coming from someone pitted against three powerful judges of a powerful institution. But this basic minimum right was denied to the woman. What Justice (D Y) Chandrachud now appears to have said in his letter is absolutely correct, when he wrote that the woman should be allowed to be represented by a lawyer or an amicus curiae. I also agree that there ought to have been an external inquiry. There is no other way to ensure that the judiciary can be viewed as an impartial body

Certain other facts about this so called inquiry are also problematic. The woman was told that her own testimony, once she made it, would not be given to her because the inquiry is confidential. She also asked for procedural guidelines before the committee began its inquiry, but even that was not supplied. It is all very Kafka-esque in so many ways, and reminds one of the trial in his book of the same name.

Now, I believe as per the law laid down in Indira Jaising's case, the report of this inquiry's will not be available to the public, nor can anyone challenge this in-house inquiry. So, all this has ended in a complete mockery of justice", he added.

Senior Advocate Indira Jaising termed the enquiry result a 'scandal' and demanded the disclosure of the findings of the enquiry report.

She objected to the committee placing reliance on a 2003 decision in Indira Jaising v Supreme Court of India to state that in-house report need not be made public. Jaising said that the decision had no relevance in the post-RTI era.

#NotInMyName
This is a scandal
Indira Jaising v Supreme Court of India was also a case of sexual harassment by a sitting High Court of Karnataka.

It is a pre RTI case and is bad in law
Demand the disclosure of the findings of the enquiry committee in public interest https://t.co/Saw07mBPhV

"The inquiry in this case, which has now concluded, did not meet the open and fair standard", said Sanjay Hegde, Senior Advocate, in an article written in The Hindu.

"The complainant walked out and the inquiry proceeded ex parte. The inquiry committee could not have compelled her to participate. Yet, by proceeding further and rendering an ex-parte finding, its report, while legally defensible, will still remain wanting in public perception. The inquiry could well have paused to consider whether the complainant's concerns could be addressed. It could have also broad-based itself to bring on board an independent amicus curiae to stand for the complainant's interest. The independence of the judiciary rests on public trust, and public trust is not maintained by one-sided inquiries", he added.

Senior Advocate Dushyant Dave has termed the procedure a "miscarriage of justice" in an article written in The Hindu.

"In the absence of any known procedure, the non-observance of the principles of natural justice and the absence of effective representation of the victim, the report, even though not for the public, is non-est and void ab initio", he said.

Senior Advocate Rakesh Dwivedi said in an article written in Live Law that the enquiry report should be placed before the Full Court and that its should be disclosed to public.

"If the full court ratified the panel of enquiry, the report too must go to the full court. The full court must give it a close look , in the absence of the CJI. If this too is avoided it would be a mockery of justice . There cannot be Independence from the full court. Full Court is higher than all individual judges. Please do not shirk collective responsibility. Judicial power vests there. We look up for a responsible and democratic Judiciary. Please for God sake remove the blindfold from our eyes . Trust the people. People need Judiciary. They want its independence. They trust their judges. Do not betray their trust. You stand at the brink. Don't run away from the Agni Pariksha. Disclose the report to the people", Dwivedi said.

An In-house committee of the CJI's colleagues which held informal proceedings in-camera (without recording the proceedings) without allowing the complainant any lawyer or support person (making her walk out) has given a hasty clean chit to the CJI in a 'sealed cover'! Surprised? https://t.co/I5Os7csqvr

Advocate and constitutional scholar Gautam Bhatia said that the in-house panel has undone the gains of Visakha judgment and POSH Act in one stroke by returning one-sided findings.

Supreme Court lawyer Karuna Nundy cited three important problems with the enquiry report — limited participation of the complainant, the lack of a retired woman judge as an external member and the complainant not being allowed a lawyer.

Former CIC and noted academic-writer Professor M Sridhar Acharyulu told Live Law that "The Supreme Court has a duty to inform the complainant and the people in general what process was adopted, which law was followed, whether principles of natural justice were adhered to, is there any provision for complainant to file appeal or seek review of this report, if so where and how, will she get opportunity to cross examine the witnesses of respondent, whether witnesses who are subordinate staff members of apex court have deposed, if so what have they deposed etc".