J&K Petitions : When SC Feels Unburdened By The Constitution 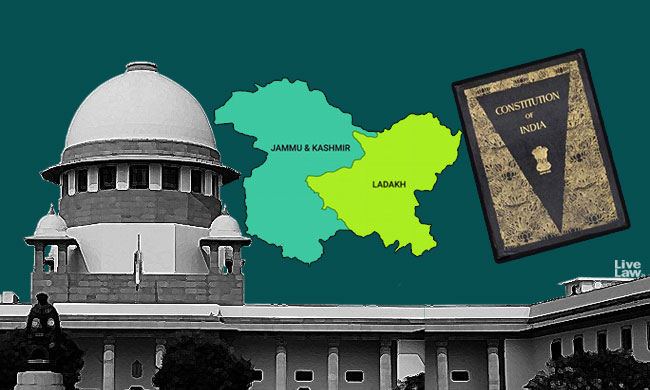 "The State of Jammu & Kashmir, keeping in mind the national interest and internal security, shall make all endeavours to ensure that normal life is restored in Kashmir; people have access to healthcare facilities and schools, colleges and other educational institutions and public transport functions and operates normally. All forms of communication, subject to overriding consideration...

"The State of Jammu & Kashmir, keeping in mind the national interest and internal security, shall make all endeavours to ensure that normal life is restored in Kashmir; people have access to healthcare facilities and schools, colleges and other educational institutions and public transport functions and operates normally. All forms of communication, subject to overriding consideration of national security, shall be normalized, if required on a selective basis, particularly for healthcare facilities." (Emphasis supplied) : The Supreme Court of India in a petition challenging the constitutionality of the curtailment of various freedoms in Jammu & Kashmir, on 16.09.2019.

Aazaadi, Freedom. These are the words that anyone who wants to truthfully chronicle or analyse the role of the Supreme Court of India with regard to Jammu & Kashmir in the period following 5th August, 2019 will find herself compelled to use. Every single petition, every single order passed by the apex court, every observation, every decision regarding when each petition concerning the state of and people in Jammu & Kashmir (Hereinafter 'the J&K Petitions') would be listed demonstrates unequivocally that the Supreme Court is now free, free of the Constitution of India.

I have previously written about the proceedings in the J&K petitions in the apex court here, here and here. I will devote this piece to the events which transpired in the court re: the J&K petitions on 16th September, 2019, but first, some facts.

In the last 40+ days, Jammu & Kashmir has been subjected to unprecedented military deployment, all means of communication completely cut off, democratically elected political leaders have been detained, thousands-(over four thousand by one estimate) have been thrown in various prisons, various credible international news organizations have reported stories of abuse at the hands of armed forces, people being unable to access health care, their livelihoods destroyed.

Forty days have passed and the Supreme Court is yet to even begin hearing the challenge to the law which seeks to alter the constitutional protections afforded to Jammu & Kashmir. There is prima facie suspension of freedoms and rights guaranteed to people in India including Jammu & Kashmir by the Constitution of India. These 40+ days have not seen the SC ask the GoI even once: how does this suspension of rights and freedoms stand constitutional scrutiny?

There has not even been a pretense that violation of fundamental rights requires legal justification. There has been no talk whatsoever of legal standards, fundamental rights etc. In the very first hearing of a PIL concerning the matter, the court observed: that the situation is 'serious' and that J&K may be 'apprehending breakdown of law and order' and 'we have to give them some time too'.

From there it has gone to perversely twisting the very meaning of Habeas Corpus- 'allowing petitioners' to travel to J&K instead of directing state to produce the person qua whom the remedy of Habeas was sought and asked another petitioner- the daughter of a former Chief Minister no less- why she needs to travel freely in J&K when 'it is very cold'.

Most recently, it has asked the GoI to ensure 'normal life' is restored in Kashmir. But the constitution doesn't define 'normal life'.

Which normal is sought to be implemented in J&K? The normal experienced by people in Jammu in Kashmir in which year of independent India? What is the normalcy in the region, when internet shut downs and communication blockades have become a regular fare there? Which standard of normalcy will be used to test the validity of the Centre's lockdown measures, which were termed as 'a collective punishment on the people' by the UN Human Rights body?

In another petition heard on the same day about people not being able to access the High Court of Jammu & Kashmir, the Chief Justice of India Ranjan Gogoi reportedly said "We must know if there is denial of access to justice. I will personally speak to the CJ and if required, will go there."

The duties cast on the Supreme Court begin with the constitution of India being upheld inside the court itself- a task for which no one need travel anywhere. The report notes that "The CJI warned that if claim is proved to be false, then accountability will follow." What will happen if the claim is proved to be true? There seems to be silence on that. Does the CJI plan to personally verify every claim of violation of fundamental rights? Is this particular claim being given priority over others because it falls under his administrative supervision? Is that an indication of the hierarchy of problems in the court's mind regarding the matter? "I will personally go" reads more like an emperor trying to sound benevolent than a constitutional court trying to do its job.

The eagerness shown by the SC to seek a report from the J&K HC CJ regarding its functioning stands in stark contrast with the reluctance shown by it to ask the Centre about the legal basis of the detention of the political leaders and communication blockade.

It guarantees liberty and a life of dignity.

Take a moment to read a few quotes from the famous Right To Privacy Judgment for which the court was rightly lauded: "Life and personal liberty are inalienable rights. These are rights which are inseparable from a dignified human existence. The dignity of the individual, equality between human beings and the quest for liberty are the foundational pillars of the Indian constitution…

Life and personal liberty are not creations of the constitution. These rights are recognised by the constitution as inhering in each individual as an intrinsic and inseparable part of the human element which dwells within."

"Statutory law can be made and also unmade by a simple Parliamentary majority. In short, the ruling party can, at will, do away with any or all of the protections contained in the statutes mentioned hereinabove. Fundamental rights, on the other hand, are contained in the Constitution so that there would be rights that the citizens of this country may enjoy despite the governments that they may elect... The recognition of such right in the fundamental rights chapter of the Constitution is only a recognition that such right exists notwithstanding the shifting sands of majority governments."

Can anyone look at these quotes and then look at the J&K proceedings and believe that both have come from the same court in a span of less than 3 years?

Given the proceedings in the J&K petitions, at least one of two things has to be true. First- like I said earlier- the Supreme Court now finds itself unburdened by the constitution of India. The court as envisaged in the constitution is gone. What we have instead is some sort of a body which is subject to the whims and fancies, mercy or wrath of whichever individuals(s) happen to hold office at the moment. Some sort of Judicial Emperors that is.

Second, given that fundamental rights are guaranteed to all Indians and Article 21 even to all human beings even non-Indians- for the Supreme court of India, those in Jammu & Kashmir are less Indian if not sub-human.

(The author is an advocate practising in Delhi. Views are personal)