I Will Personally Speak To CJ Of J&K High Court To Verify If There Is Difficulty In Approaching It : CJI Gogoi [Read Order] 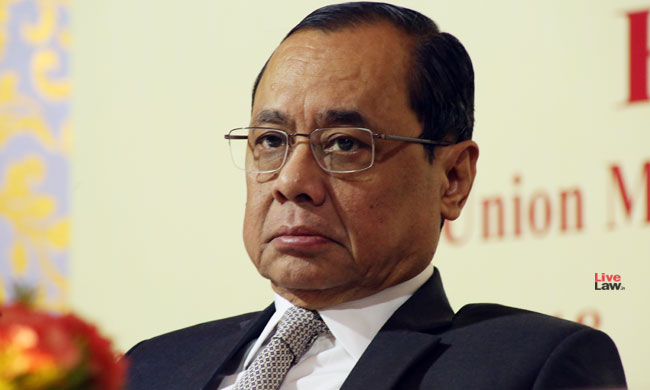 The Supreme Court on Monday took serious note of the submission made by Senior Advocate Huzefa Ahmadi that people are finding it difficult to approach the Jammu and Kashmir High Court."This is an extremely serious submission. We must verify this", said CJI Ranjan Gogoi, who was heading the bench, while passing an order seeking a report from the Chief Justice of J&K High Court."We must know...

The Supreme Court on Monday took serious note of the submission made by Senior Advocate Huzefa Ahmadi that people are finding it difficult to approach the Jammu and Kashmir High Court.

"This is an extremely serious submission. We must verify this", said CJI Ranjan Gogoi, who was heading the bench, while passing an order seeking a report from the Chief Justice of J&K High Court.

"We must know if there is denial of access to justice. I will personally speak to the CJ and if required, will go there", the CJI said.

Th CJI warned that if claim is proved to be false,then accountability will follow

The bench was considering a Public Interest Litigation seeking urgent judicial intervention in the issue of detention of children in Kashmir.

The PIL was filed by Ms. Enakshi Ganguly, an eminent child rights expert and Professor Shanta Sinha , the first Chairperson of the National Commission for Child Rights (NCPCR) against the illegal detention of children in Jammu and Kashmir in the wake of revocation of Article 370 and bifurcation of State.

The Petitioners submitted that there have been certain reports specific to children, which describe violations that include loss of life and liberty, and that the reports are serious enough to merit judicial review of the situation with respect to children and to enforce and monitor certain immediate corrective action.

The petitioners highlighted  two important areas of concern, the first pertains to illegal (if temporary) detention (and in some cases beatings) of young boys by security forces. The second concerns serious injuries and deaths of children through deliberate or accidental action by security forces.

It is submitted, on the basis of extensive news reports that a large number of minors and youths have been picked up by security forces in places like Pampore, Awantipora, Khrew, Tral,

Petitioners submitted that as a constitutional democracy, it is imperative, especially in these extraordinary circumstances that the Supreme Court ensures that no excesses take place against women and children, who are admittedly most vulnerable in such tense situations.

The Petition filed through Advocate Sumita Hazarika, makes the case that even if the child is a potential 'stone-pelter', he should not be detained without express written orders of a judicial authority, describing the provision of law permitting such detention.

It is submitted that the situation in Kashmir today is urgent and disturbing from the perspective of children's wellbeing. It would appear from the reports that the state is acting in violation of both specific laws with respect to children and also of constitutional principles and International Child rights commitments.

Petitioners have sought a direction to Respondent to file a status report detailing the current whereabouts, and the medical (both psychological and physical) status be provided on the specific children described in this petition, who have been detained or were detained and who have been beaten up in custody.

It is also prayed that all persons below the age of eighteen years who are detained in any police station, detention centre, jails, or any other confinement, by whatever name called in Jammu and Kashmir be identified through an age census conducted under the aegis of the Juvenile Justice Committee of the High Court of Jammu and Kashmir

It is also prayed that all children who are currently detained be produced before the Juvenile Justice Committee of the High Court and brought under their care and supervision, so that they may be provided with the necessary support.