Law On Reels - 'Article 15' : Addressing The Divide Between Constitutional Vision And Social Realities 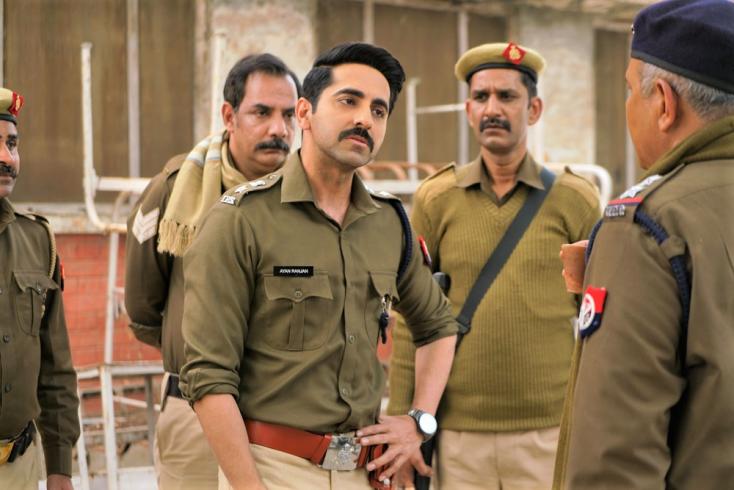 x
To present Article 15 in reels as a walking idea, as a thought which is yearning to take the shape of lived reality - that was a cinematic novelty.

Halfway into the movie 'Article 15', the Constitutional provision makes a dramatic entry, quite literally, with all the cinematic build-up associated with grand heroism.The protagonist police officer Ayan Ranjan (Ayushman Khurrana), who is disturbed and disgusted by the caste divisions and graded notions of purity associated with each social hierarchy, takes a print out of 'Article 15' in...

Halfway into the movie 'Article 15', the Constitutional provision makes a dramatic entry, quite literally, with all the cinematic build-up associated with grand heroism.

The protagonist police officer Ayan Ranjan (Ayushman Khurrana), who is disturbed and disgusted by the caste divisions and graded notions of purity associated with each social hierarchy, takes a print out of 'Article 15' in Hindi and English, and pins it at the notice board in the police station.

Ranjan's colleagues are shown as taken aback by the knowledge of existence of the constitutional provisions which guarantee equal status for all and forbid discrimination on the grounds of caste, religion, sex, place of birth etc.

Directed by Anubhav Sinha, 'Article 15' is essentially an investigative thriller, based on the 2014 Baduan gang rape-murders of two teenage girls belonging to Dalit community. What elevates the film from a regular cinema experience is its attempt to show the yawning gap between constitutional idealism and the ground reality. The film written jointly by Sinha and Gaurav Solanki shows how in a society still dictated by the traditions of 2000 year old caste system, the equality clauses enshrined in the Constitution do not matter at all.

This divide is shown in the beginning scenes itself. When Ayan Ranjan, a new IPS recruit appointed as Additional Commissioner of Lal Gaon in UP hinterland, asks for water in a village during his journey, his driver discourages him by saying that it's the village of Pasis, a pig-rearing Dalit sub caste. He implies that drinking water from there will make Ranjan 'impure'. This was shortly after an evocative scene where a statue of Dr B R Ambedkar is shown getting drenched in rain. The State has let Ambedkerite vision get ossified in stone, while letting social divisions prevail!

Ranjan is shown as naively unaware of the workings of caste dynamics. Urban, suave, educated at elite institutions such as St.Stephen's Delhi, speaking and thinking in English, and mostly bookish, Ranjan feels like an alien in Lal Gaon. His activist girlfriend in city chides him by calling him a 'foreigner'. Till reaching Lal Gaon, he was blind to his own upper-caste privileges, as they did not matter to him in his comfortable city existence.

But he is not carried away by the privileges conferred on him by the age-old system. In a scene shortly after the flogging of Dalit boys for entering a temple (based on the real 2016 Una flogging), Ranjan asks his colleagues why their temple entry was a problem. His colleagues 'educate' him about the different grades of purity of each castes and their sub-castes, and also about the dos and don'ts associated with each caste status. They also inform him that he is the highest among them, but a notch below the temple priest. All this leaves him fuming and disgusted, making him think of 'educating' them in return about 'Article 15'.

Inspired by his call of duty, Ranjan digs deep into the death of minor girls, exploring the caste angle. It was not a simple crime of passion, but a premeditated act intended to send a warning, to show 'them' their place in society, he realizes. This was because the girls asked for a raise of three rupees in their daily wage job with a local, powerful contractor.

Meanwhile, Brahmadutt Singh(brilliantly portrayed by Manoj Pahwa), an officer lesser in rank but more experienced with the ways of the system, tries to dissuade Ranjan from probing the case too much and urges him to close it. "Don't disturb the 'santhulan'( balance) of the society", he pleads.

In a society deeply divided on the lines of caste hierarchy and grades of privileges, doing the right thing often leads to disruption of 'social balance'.

But isn't it the same thing which the Constitution also seeks to achieve? - to disrupt the social order based on inequal privileges associated with birth and identity.

In a talk, Justice Chandrachud had commented that the transformative vision of constitution involves disruption of existing social orders to make society more egalitarian and equality based. The emancipatory nature of Constitution seeks to give people the power over their destiny, Justice Chandrachud had elaborated. But these ideals seem completely out of place in the harsh reality where one's destiny and place in society are marked by birth status.

When A Person Is Lynched For The Food He Had, It Is The Constitution Which Gets Lynched : Justice Chandrachud

When Nishad,a fiery Dalit activist in the film(zealously portrayed by Zeeshan Ayyub), tells Ranjan that they want to be counted as 'jan' (citizens) in the society, he is seeking for the inclusion in 'We the people' as promised by the Constitution. In a poignant monologue, inspired from the suicide note of Rohith Vemula, Nishad reflects that the miseries of his people are destined by an accident of birth.

Dr.Ambedkar had foreseen this situation, and had commented that Constitutional vision will be a foreign concept in Indian realities.

"Constitutional morality is not a natural sentiment. It has to be cultivated. We must realize that our people have yet to learn it. Democracy in India is only a top-dressing on an Indian soil which is essentially undemocratic", he had said.

With cinematic imagination, 'Article 15' tries to do what Article 15 seeks to do in reality – plug the social divisions. The film also emphasizes that 'our people have yet to learn it'.

Alien to the surroundings, motivated by an egalitarian vision, and unhesitating to act with a disruptive force for the sake of justice – Ranjan's traits seemed metaphorical of the Constitution itself.

In the book 'People's Constitution', Rohit De persuasively dispels the notion that Constitution is a document for the elites, by demonstrating that the landmark judicial battles for protecting Constitutional rights were waged by those in the margins. Constitution is precious for them the most, because their personhood is recognized only by it. 'Article 15' makes this point too, quite effectively.

Rather than story-telling, the focus of the movie is on messaging. Hence, the characters are without shades of grey, as they are used as vehicles for presenting different points of view. Compromises on artistic subtleties were evident at places. Ranjan's character also suffers from the cliched hangover of 'a privileged saviour'. The celebratory tone with which the movie ended diluted the powerful mood which it otherwise managed to create till then. The performances are a watch-out for. A special mention has to be made for Kumud Mishra, who played the role of Jatav, a Dalit police officer who is constantly reminded of his origins by his colleagues. The cinematography was striking, with the visuals of foggy days and dusty lands creating an ambiance of foreboding.

Despite minor quibbles, the movie deserves to be watched and taken seriously, more for its topicality.

(This is seventh in the "Law On Reels" series, which explores legal themes in movies)