Save The Islands Of Excellence: Problems Ailing NLUs 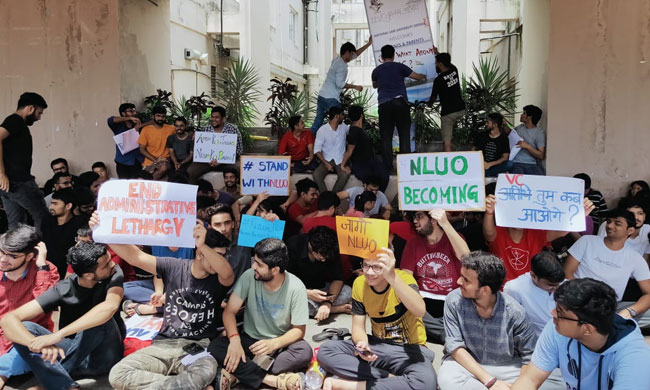 National Law University, Odisha students went on an indefinite strike against the lack of infrastructure, administrative lethargy, unreasonable policies, lack of reform, and arbitrary fee hike. NLUO has joined the club of NLUs who have to resort to get their demands heard. Few months ago a 25% hike in the annual fee of the National Law School of India (NLSIU) once again triggered the...

National Law University, Odisha students went on an indefinite strike against the lack of infrastructure, administrative lethargy, unreasonable policies, lack of reform, and arbitrary fee hike. NLUO has joined the club of NLUs who have to resort to get their demands heard. Few months ago a 25% hike in the annual fee of the National Law School of India (NLSIU) once again triggered the old issue, that is, the exorbitant fee of National Law Universities (NLUs) of India. The annual fee of NLSIU was Rs 1.8 lakhs which was given a 25% hike bringing it close to the mark of Rs 2.5 lakhs. While the controversy is still pending and a decision on the dispute is still awaited we look at the issue i.e. high fees of NLUs which is now pending for a long period of time and still has not seen any significant measure from the government side.

NLUs only for rich

There are now 22 NLUs imparting education in the country. The examination for all (except NLU Delhi) as conducted under CLAT 2019. Here is the compilation of fee structure as prescribed by different NLUs in their Brochures on the CLAT website.

*For UG course. The mess/hostel fee may not be included in few amounts.

Only 5 NLUS out of 22 have their fees below the mark of ₹ 2 lakhs. The problem of the higher fee can skew the diversity of professionals. The NLUs are now being dominated by the population from the middle and upper-middle class. IDIA's surveyed students entering law school in 2013-14. Its survey found that 87% of the students have received CLAT coaching that can cost up to ₹ 1 lac showing that majority of the population comes from privileged community.

In a study it was observed that the average annual family income of the students in NLSIU was ₹19.6 lakh. The high fee charged by the NLUs has made them the "elite institutes". The scholarship provided by NLUs does not suffice the obligation of being inclusive. The scholarships are provided on a merit basis to only very few individuals. This results in a higher drop rate and more number of resorting to the burden of education loan.

However these fees are one of the main sources of income for NLUs. NLUs on an average generate ₹ 2 to ₹ 3 Crore from the fees of the students.. NLUs also admit NRI/NRI sponsored students in their study programme. In a study it was pointed out that 15 NLUs made more than 10 million from the NRI/NRI sponsored student. The constitutional validity of this NRI quota is already a disputed matter. The unreasonable classification, unreasonable and non-uniform requirement of merit and high fees charged from these students raises the question of NRI quota being unconstitutional.

The NLUs are, as opposed to the popular belief, not completely government-funded. After the establishment of NLSIU in 1988 and its resounding success this NLU model (as popularly known) spread in another state as well. Now 18 Indian states have an NLU. The NLUs are established under their respective state legislation hence their primary dependence is on the state and occasional UGC grant. While the state governments were keen to give the initial grant to these universities to meet the capital expense i.e. campus and infrastructure they have shown far less interest to release the fund for these universities. Hence NLUs have to meet the expenses from the revenue generated by the student fee. Faizan Mustafa (VC of NALSAR) points out that "Finances are not in great condition with all the tightening".. NUSRL Vice-Chancellor B.C Nirmal was quoted saying that NUSRL, the totally self-sponsored NLU was facing a severe fund crunch and that the state government has not released the allotted fund to it.

Most of the NLUs are kept outside the state executive body which don't consider it an institution of "political" importance. Many NLUs have Chief Justice of High Court as their Chancellors. Only RMLNLU is having state's Chief Minister (executive body of state) as its Chancellor and also has the lowest annual fee among all NLUs since it is adequately funded by the state government. The appointment of justices is good for systemic arrangement of the university however it cannot achieve a holistic development without the participation of the state.

Reform it or lose it.

The issue of nationalisation of NLUs has often been raised but to no avail. Last year NLU Student Consortium demanded a nationalisation of NLUs and grant them the status of "Institute of National importance". NLUs which were envisaged as "islands of legal excellence to create a generation 'social engineers' for 'nation building'" have failed the cause of legal excellence in India.

The NLUs are mostly controlled by external regulatory bodies like University Grant Commission (UGC) and Bar Council of India (BCI). However it was only in 2018 that UGC granted Class 1 autonomy to NLU Delhi and NALSAR, and a Class II autonomy to NLUO. However this grant of autonomy was of no considerable importance. As NALSAR's VC Faizan Mustafa said, "It doesn't help much because there is no funding for NLUs from the UGC." In addition there is no autonomy in strict sense as he added "Also unless I have autonomy from the BCI also it is not going to drastically improve my situation,"

The cash crunch has resulted in failure on part of many NLUs to provide basic facilities like decent faculty, proper classrooms, proper residential areas, a rich-library and other such necessities despite charging exorbitant fee. The lack of such facilities has resulted in failure of the NLUs to realise their potential. Far from being"research-driven" universities they have remained "teaching led" institutions. The lack of funds to employ high-quality teachers is one of the factors responsible for this dismal state.

Even after many hardships many NLUs have acted as a centre for excellence providing quality legal education. Many of the NLUs alumni are now dominating the top firms of the country and even abroad. NLUs faculties are also consulted by government bodies and provide facilities to many government owned bodies, for instance conducting training programs for Hindustan Aeronautics Ltd, admission of new recruits in PSUs through the score of CLAT PG and etc.

There is a long overdue demand to bring the NLUs under single national legislation thereby bringing them at par with the other professional institutions like IITs and IIMs. The NLUs also hold the brilliant minds like IITs and IIMs and need a better nurturing environment to grow.

The Law Minister in Parliament while answering the question posed said that there is no proposal to nationalise the NLUs.

As our former Prime Minister Manmohan Singh observed that NLUs, "remain islands of excellence amidst a sea of institutionalised mediocrity". If we wish to preserve these island then the Union and State has to take the responsibility to provide them with adequate external help. The islands cannot be completely blamed for exploiting their island resource to ensure the survival of the island and the population living in it.