The Tribunals Judgment – II: On Independence 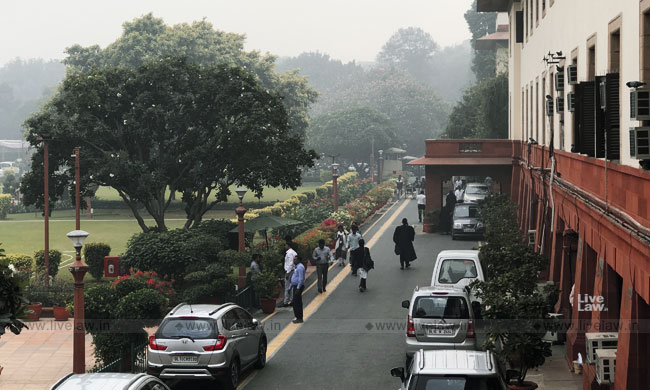 In yesterday's post, I discussed the significance of the Tribunals Judgment on the vexed issue of money bills. Today's post discusses the judgment's engagement with the principal legal provision under challenge – Section 184 of the Finance Act. While the majority upheld the constitutionality of the Finance Act – but struck down the Rules framed under it – Chandrachud and Gupta JJ,...

In yesterday's post, I discussed the significance of the Tribunals Judgment on the vexed issue of money bills. Today's post discusses the judgment's engagement with the principal legal provision under challenge – Section 184 of the Finance Act. While the majority upheld the constitutionality of the Finance Act – but struck down the Rules framed under it – Chandrachud and Gupta JJ, writing separate dissenting opinions, struck down the primary legislation as well.

Recall that Section 184 of the Act authorised the Government to "by notification, make rules to provide for qualifications, appointment, term of office, salaries and allowances, resignation, removal and the other terms and conditions of service" of Tribunal Members. It set upper age limits, and prohibited the variance of the terms and conditions to the detriment of members, after their appointment. The Petitioners argued this amounted to excessive delegation, and would make "the Tribunals amenable to the whims and fancies of the largest litigant, the State." On the other hand, the Section was defended by the Union of India on the ground that the existence of multiple Tribunals in the country required harmonisation.

The Majority Opinion restated the law on excessive delegation, noting that what is prohibited is the "abdication or effacement by conferring the power of legislation to the subordinate authority" (in this case, to the government) – that is, "essential legislative functions" could not be delegated. Or, to put it another way, legislation would have to stipulate the policy with sufficient clarity, while leaving the implementation of it to the executive branch.

Applying this test, the Majority held that Section 184 did not suffer from excessive delegation. However, the Majority's rationale for that was somewhat curious. In paragraph 143, it noted:

The objects of the parent enactments as well as the law laid down by this Court in R.K. Jain (supra), L Chandra Kumar (supra), R. Gandhi (supra), Madras Bar Association (supra) and Gujarat Urja Vikas (supra) undoubtedly bind the delegate and mandatorily requires the delegate under Section 184 to act strictly in conformity with these decisions and the objects of delegated legislation stipulated in the statutes. It must also be emphasised that the Finance Act, 2017 nowhere indicates that the legislature had intended to differ from, let alone make amendments, to remove the edifice and foundation of such decisions by enacting the Finance Act. Indeed, the learned Attorney General was clear in suggesting that Part XIV was inserted with a view to incorporate the changes recommended by this Court in earlier decisions.

In other words, the Majority held that the "policy" came not from the Finance Act, but from previous judgments of the Court that had set out the framework within which Tribunals would necessarily have to function; and it then deemed that the Finance Act had adopted this framework, as it had given no indication to the contrary. This framework, the Majority went on to hold, was constituted by principles such as independence (both individual, and institutional) of the Tribunal. Independence required "a sufficient degree of separation" between Tribunals and the Government:

Functional independence would include method of selection and qualifications prescribed, as independence begins with appointment of persons of calibre, ability and integrity. Protection from interference and independence from the executive pressure, fearlessness from other power centres – economic and political, and freedom from prejudices acquired and nurtured by the class to which the adjudicator belongs, are important attributes of institutional independence. (paragraph 144)

It must be said that this is a somewhat innovative development in the law of excessive delegation. Interestingly, the Court was unable to provide precedent to support its view that "legislative policy" – the existence of which was an essential precondition for delegation to be valid – could itself be – er – delegated to the Courts instead. That said, however, this was a highly specific case: the history of Tribunalisation in India has been a history of dialogue between the Court and the Legislature; in a sense, the constitutional framework within which Tribunals function has evolved out of this dialogue. To the extent that the Majority Opinion is justifiable, then, it is a justification that – at best – is limited to the facts of this case.

Having laid out the principle of independence – and what it required – the Majority went on to examine the Rules that the government had passed under Section 184. Appointment to the Tribunals were to be made upon the recommendation of a "Search-cum-Selection Committee." These Committees were dominated by government nominees and bureaucrats. On this basis, the Majority Opinion held that "the lack of judicial dominance in the Search-cum-Selection Committee is in direct contravention of the doctrine of separation of powers and is an encroachment on the judicial domain." (paragraph 153) This was specially important because "the Executive is a litigating party in most of the litigation and hence cannot be allowed to be a dominant participant in judicial appointments." (paragraph 157)

Next, the Majority found that the qualification of the members was lacking. Technical members without any adjudicatory experience could be appointed, and Presiding Officers need not have any judicial experience. This was particularly important, as these Tribunals had been formed after divesting the Courts from adjudicating in these domains; consequently, it was necessary that "the qualification and acumen of the members in such Tribunal must be commensurate with that of the Court from which the adjudicatory function is transferred." (paragraph 163) And even the qualifications of judicial members had been weakened, with a substantial amount of discretion being placed in the hands of the government, to appoint individuals it considered suitable. This, the Majority held, was unconstitutionally vague.

Thirdly, the Majority found that the removal process vested too much power in the hands of the government as well; the government could constitute a committee, which could recommend removal. The Court noted that "it is well understood across the world and also under our Constitutional framework that allowing judges to be removed by the Executive is palpably unconstitutional and would make them amenable to the whims of the Executive, hampering discharge of judicial functions." (paragraph 169)

Fourthly, the Majority found that there were inconsistencies in retirement ages, and the tenures themselves were short – they were of three years. The Court held that "a short tenure, coupled with provision of routine suspensions pending enquiry and lack of immunity thereof increases the influence and control of the Executive over Members of Tribunals, thus adversely affecting the impartiality of the Tribunals." (paragraph 175)

On the bases of these findings (summed up in paragraph 179), the Majority Opinion found the Rules to be unconstitutional and struck them down.

These observations and findings are undoubtedly correct. The Majority Opinion drew a clear link between institutional independence (the "policy" underlying tribunalisation, as reflected in the Finance Act), and the government control over (a) appointments, (b) qualifications, (c) removal, and (d) tenure. It also went on to note – while considering the issue of a "nodal agency" to oversee the functioning of tribunals – the importance of (e) financial independence.

And lastly, the Majority Opinion found that direct appeals from the Tribunals to the Supreme Court were constitutionally problematic, and directed the government to reconsider the appeals process within six months. Perhaps, unfortunately, however, the Majority Opinion framed this as a question more about judicial efficiency and less about a valuable procedural right to access the High Courts under Article 226.

While this was not framed as a response to the Majority Opinion on the issue of excessive delegation, in effect, that is what it is. According to Chandrachud J., Parliament could not validly delegate "controlling authority" over Tribunals to the Executive, given the overarching framework of judicial independence. On the analysis of the Rules, Chandrachud J.'s analysis mirrored that of the Majority.

Lastly, on the issue of excessive delegation, Gupta J. filed a brief opinion agreeing with Chandrachud J. As he observed:

We are in the present case dealing with the appointment of Chairpersons/Members to various Tribunals. They are enjoined upon to discharge a constitutional function of delivering justice to the people. What should be the essential qualifications and attributes of persons selected to man such high posts is, in my view, an essential part of legislative functions. (paragraph 27)

Gupta J. went on to make the important point that the Constitution itself could not have "delegated" the appointment process for judges to the executive (although recall that the NJAC did delegate it to the legislature!). And if Tribunals were meant to substitute for Courts, then – logically – the same considerations had to apply. Gupta J. specifically took issue with the Majority Opinion that the legislative policy was provided by the judgments of the Court; he noted – and in my view correctly – that it could not always be assumed that the other branches were prompt and accurate in following Court judgments.

Addendum: Impact upon the RTI Amendments

Previously on this blog, we have discussed the amendments that were made to the RTI Act earlier this year. In a similar fashion, the RTI Amendments had delegated to the Government authority over the constitution and running of the Information Commission, through secondary legislation. Now, it is true that the Information Commission is not identical to the Tribunals that were dealt with under the Finance Act. That said, however, in my view, this judgment has an important impact upon the RTI Amendments – and the Rules that were subsequently framed.

First, let us see the extent to which there is similarity between the two situations. In my view, the similarity exists in two important respects. First, in view of the fundamental right to information, and the role played by the Information Commission (as I argued in that earlier post), the requirement of individual and institutional independence is at least as pressing for the Information Commission as it is for the Tribunals. Secondly, the presence of the government as the largest litigator was an important factor in this case; in the RTI context, however, the Government is an even bigger litigator, as information requests are made to Public Information Officers. Institutional independence, then, becomes even more important.

With that having been established, this judgment makes clear that (a) appointment, (b) qualifications, (c) removal, (d) tenure, and (e) financial independence are all integral facets of institutional independence. While the Court's specific findings with respect to the adjudicatory character of the Tribunals may not be directly applicable (although the point is arguable), the link between the above five factors and government control applies across the board. The RTI Rules, therefore, can be directly examined under this framework.

And lastly, as I have argued above, the Majority Opinion's finding that Section 184 did not suffer from excessive delegation was based upon the very specific history of the tribunalisation. In the absence of that history, I believe that it is more than arguable that the RTI Amendments suffer from the vice of excessive delegation (again, in the context of the fact that the right to information is a fundamental right); indeed, Chandrachud and Gupta JJ.'s dissents on the point show us exactly how.

It remains to be seen, however, how the Courts will deal with these issues if a challenge is brought before them.

Gautam Bhatia Is A Delhi Based Lawyer

The article was first published in his blog. You can read it  here