Toxic Masculinity In Legal Profession : Lessons From A Botched Up Webinar 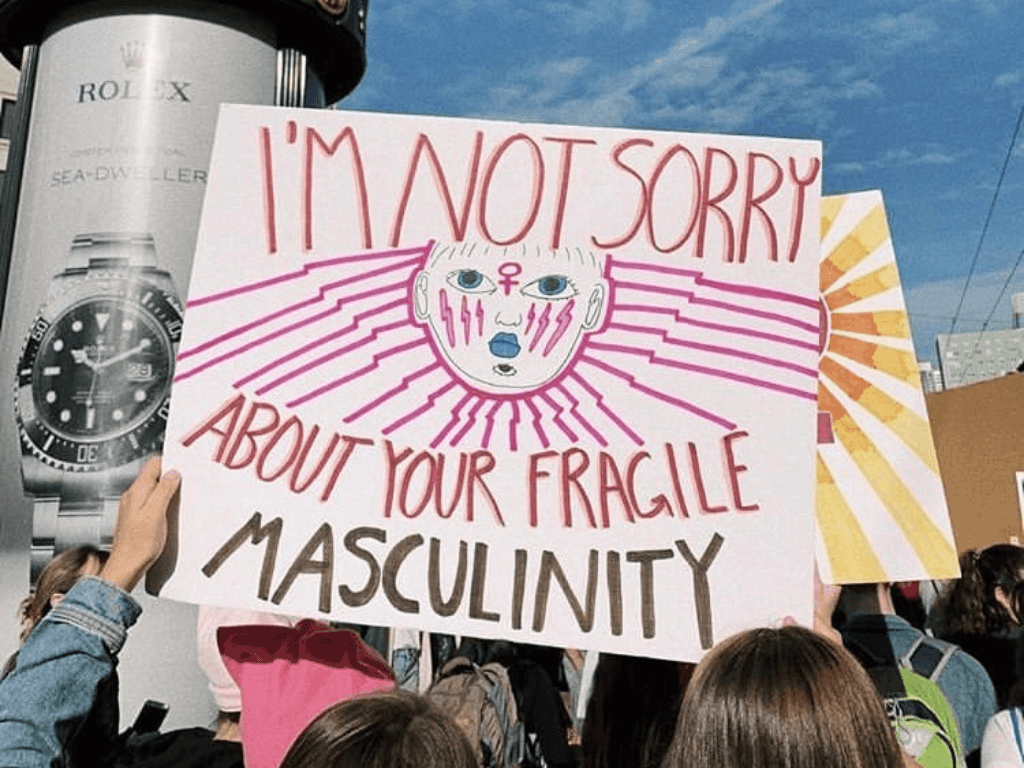 x
The LawSikho incident is a microcosm of the internalized misogyny and sexism which is prevalent in the legal fraternity.

It is a truth universally acknowledged, but seldom conveyed, that a woman faces abject discrimination in every space that she enters, be it personal or professional. Objectified, belittled, patronized, dismissed; these are simply a few things that a woman has to face when she makes an attempt to break out of the mould of being confined to the private sphere. With the slow evolution...

It is a truth universally acknowledged, but seldom conveyed, that a woman faces abject discrimination in every space that she enters, be it personal or professional. Objectified, belittled, patronized, dismissed; these are simply a few things that a woman has to face when she makes an attempt to break out of the mould of being confined to the private sphere.

With the slow evolution of gender justice and its penetration into workplaces, there have been some positive changes, though few and far between, in the law governing discrimination against women; for instance, we now have The Sexual Harassment of Women at Workplace (Prevention, Prohibition and Redressal) Act, 2013 (POSH). There are regular gender sensitization workshops which are conducted by firms and independent organisations, in order to inculcate the basic tenets of consent, respect for other persons and the concept of personal boundaries.

However, despite these constructive steps being taken for a more inclusive atmosphere, we have certain elements which attempt to undo the progress and in turn reveal the pervasive nature of misogyny and sexism that no amount of penal consequences can reform.

Recently, a legal education organization by the name of LawSikho  conducted a webinar titled, "How can busy professionals have a dating life". The flyer for the webinar carried a "for men only" condition, and this brought with it an implicit assertion that women are not "busy professionals". This was countered by the CEO of the organization, Ramanuj Mukherjee, who stated that a "for women only" webinar was also in the offing.

The second issue arose with the choice of anchor the organization brought in to impart wisdom on this topic. One glance across the website and other social media profiles of the anchor, Kshitij Sehrawat, is enough to ascertain the problematic nature of the content developed by him. From videos ranging from "How to Pick Up Girls in a Wheelchair" to speaking of women in terms of numbers and objects, the self-proclaimed "Pick-Up Artist" claims to have a wide-ranging "field experience" which apparently bestows upon him the right to aid impressionable young men in approaching "women of beauty".

When the initial questions were raised about a legal website conducting such a webinar, the CEO of the organization justified the same by referring to the deplorable Bois Locker Room episode and stating that such incidents could be avoided if men were taught the "art of seduction". One wishes that the entire fiasco which followed would have stopped here, however, things only went downhill from this point onward.

During the course of the webinar, certain degrading statements were uttered by Sehrawat, with little to no intervention from Mukherjee, who moderated the event. Sehrawat encouraged the participants to "close the deal" with a woman within 4 days, otherwise the "bread" would turn stale and it would be a lost opportunity. Sehrawat also stated that one should never ask a woman for dating advice because "women do not know what they want"; that while they say they want "nice guys who wish them good morning", he had personally done the same and had been labeled a "creep".

On being asked a question about what one should do if they are academically challenged, Sehrawat dismissed the insecurities of the law student and stated that women are attracted to sportspersons ("jocks") who always score on the lower side of the scale. At this point, a young law student by the name of Avanti objected to the content of the webinar as it was based on appalling and sexist stereotypes being taught to vulnerable young men.

It is here where matters took a turn for the worse. What followed was an outright dismissal, ridiculing, an unceremonious put down of the young woman, without giving her an opportunity to air her legitimate concerns regarding the sexism being propagated through the webinar. Not only did the moderator fail to intervene in his anchor's rampant sexist monologue, but he was an active perpetrator of the same, with Sehrawat passively behaving in a condescending manner on the sidelines. It is quite strange that in a conversation about women, it was a woman herself who was not given the space to convey her perspective on the matter.

This exchange between the law student and the event moderator was soon shared on Twitter and elicited an explosive response from persons of all genders, rebuking the webinar and LawSikho's unfortunate decision to host it. The company, however, instead of apologizing unconditionally for conducting the webinar, sought to defend it.  It was only after the clamour for an apology increased did the CEO issue an unconditional apology.


TOXIC MASCULINITY IN THE WORKPLACE

The aforementioned incident is merely a snippet into the toxic culture that is inherently pervasive in the legal profession. There is entitlement, complicity, and enablement. Due to the close-knit nature of the legal circle, an individual opts to remain silent rather than to speak up against or call out any problematic incident as they fear facing irreversible repercussions, with no support from peers or superiors.

One hardly needs a reminder of the example set by the sexual harassment complaint against our very own former Chief Justice of India which led to the female complainant losing her job and having a false case of bribery filed against her for resisting the alleged sexual advances. The incident involving the former Chief Justice of India, now a nominated Member of Parliament of Rajya Sabha, has effectively sent out a message to young women in this profession that if one wishes to lead a life of peace, it is better to stay quiet as speaking up will do no harm to the perpetrator and his career progression, and it is the woman who will have to bear the brunt of opening her mouth.

This is not all. There is also the shocking case of Darvesh Yadav, who had been elected as the first woman chairperson of the Bar Council of Uttar Pradesh, and was shot dead by another lawyer within the court premises in Agra. Furthermore, the sheer statistics surrounding the number of female Senior Advocates and Judges as compared to their male counterparts is distinctly unnerving; it cements the belief that this is a male-dominated profession wherein a woman needs to fight against all odds to climb the ladder and stay there.

There also exists the ironical issue of lack of adherence of POSH policies across law chambers. POSH Act, 2013 was promulgated as a result of the case of Vishaka & Ors. V. State of Rajasthan & Ors (1997). The statement of object and reasons conveys that the Act is an attempt to protect the "fundamental rights of a woman to equality under Articles 14 and 15 of the Constitution of India and her right to life and to live with dignity under Article 21 of the Constitution and right to practice any profession or to carry on any occupation, trade, or business which includes a right to a safe environment free from sexual harassment".

The law mandates that any workplace with ten or more employees must have an Internal Complaints Committee. If a workplace has less than ten employees, then complaints are forwarded to the Local Complaints Committee which is constituted at a district level. However, sadly, this is a legal obligation which is rarely adhered to, specifically in law chambers due to their informal nature of working. This takes away from the sole safe outlet that a woman can turn to in case she faces sexual harassment.

Additionally, there is also a need for gender sensitization workshops for all genders at the level of law schools, which are breeding grounds for rampant sexism. These workshops can focus on breaking down the separation of public and private spheres, thereby reducing the differences between sexes that remain an unfortunate integral part of Indian society, and consequently, the legal profession. These perceived differences tend to perpetuate toxic masculinity which is considered a norm, and at times, is even rewarded. Comments condoning Mukherjee's treatment of the female law student are an exemplification of this aspect.

The webinar had the potential of imparting a much-needed value system and allaying the insecurities of impressionable young men. Instead of providing a platform to a problematic "pick-up artist", the company should have engaged a counsellor who was experienced in matters of work-life balance and was sensitive to the issues of gender justice. It is unfathomable that a legal website with such a large following would let such a dubious individual address such a sensitive topic.

The LawSikho incident is a microcosm of the internalized misogyny and sexism which is prevalent in the legal fraternity. The justification provided for the webinar, the conspicuous gaslighting, the outright rejection of wrongdoing, the defensive stance of the CEO to the very end, and the enablement of the same by a few of his colleagues and supporters; these are facets of gender discrimination that women face in their everyday professional life, with no access to remedies that may rectify it. Even if there does exist a remedy, it is rendered incapable of providing a solution and, more often than not, ends up creating a hurdle in the professional life of the woman who is left with no choice but to either remain silent or to quit the toxic workplace. Moreover, due to the cohesive nature of the legal fraternity, it becomes difficult for the woman to secure another job, which further adds to the need to stay silent.

However, there is always room for change, for unlearning, for acceptance. One can start with a top-down approach by employing institutional changes at the Apex Court level that can lead to the percolation of inclusivity and equality down to small law chambers in far-off districts. Law firms and chambers also need to consciously provide equal work opportunities to women and allow them to prove their mettle. Moreover, there is an urgent requirement for work places to create a safe work environment where dialogue between all individuals is encouraged and there is a zero-tolerance policy with regard to casual misogyny, specifically at higher levels of management.

To end this on a positive note and to realise that, despite setbacks, we shall not to be deterred from the path to change, one would do well to remember Rebecca Solnit's precious words:

"His name was privilege, but hers was possibility. His was the same old story, but hers was a new one about the possibility of changing a story that remains unfinished, that includes all of us, that matters so much that we will watch, but also make and tell in the weeks, months, years, decades to come".