x
The problem of Executive dominance in appointment of members persists in the new Rules as well.

Last week, the Union Government notified a new set of rules to streamline the appointment process and harmonize the service conditions of members of various statutory Tribunals. Titled the 'Tribunal, Appellate Tribunal and other Authorities (Qualifications, Experience and other Conditions of Service of Members) Rules, 2020', these Rules framed by the Ministry of Finance in exercise...

Last week, the Union Government notified a new set of rules to streamline the appointment process and harmonize the service conditions of members of various statutory Tribunals.

Titled the 'Tribunal, Appellate Tribunal and other Authorities (Qualifications, Experience and other Conditions of Service of Members) Rules, 2020', these Rules framed by the Ministry of Finance in exercise of powers under Section 184 of the Finance Act 2017 apply to 19 Tribunals such as CAT, AFT, NGT, NCLAT, SAT, ITAT, NCDRC, TDSAT etc.

Earlier, in 2017, the Centre had framed another set of Rules for Tribunals, with the same name as the new rules -'Tribunal, Appellate Tribunal and other Authorities (Qualifications, Experience and other Conditions of Service of Members) Rules, 2017'. But the 2017 Rules were struck down as unconstitutional by a Constitution Bench of the Supreme Court on November 13, 2019 in the case Rojer Mathew vs South Indian Bank and others.

The Court pointed out several flaws in the Rules and directed the Centre to re-formulate them in the light of the observations and directions in the judgment.

Does the 2020 Rules cure all the defects pointed out by the Supreme Court while quashing the 2017 Rules?

Let us find out.

Executive dominance in Tribunal appointments - Problem persists in 2020 Rules too

One of the reasons cited by the Supreme Court for striking down the 2017 Rules was that they led to the dilution of judicial independence, as the Executive was given too much say in the matter of appointment and removal of members of Tribunals.

The Search-cum-Selection Committees for Tribunals were dominated by bureaucrats and nominees of Central Government, with a nominal representation to the Chief Justice of India.

"A perusal of the Schedule to the Rules shows that save for token representation of the Chief Justice of India or his nominee in some Committees, the role of the judiciary is virtually absent", the Court observed in this connection.

"The lack of judicial dominance in the Search-cum-Selection Committee is in direct contravention of the doctrine of separation of powers and is an encroachment on the judicial domain", it observed.

"We are of the view that the Search-cum-Selection Committee as formulated under the Rules is an attempt to keep the judiciary away from the process of selection and appointment of Members, Vice-Chairman and Chairman of Tribunals. This Court has been lucid in its ruling in Supreme Court Advocates on-Record Assn. v. Union of India (Fourth Judges Case), wherein it was held that primacy of judiciary is imperative in selection and appointment of judicial officers including Judges of High Court and Supreme Court. Cognisant of the doctrine of Separation of Powers, it is important that judicial appointments take place without any influence or control of any other limb of the sovereign. The Executive is a litigating party in most of the litigation and hence cannot be allowed to be a dominant participant in judicial appointments".

It is astonishing to note that this very same problem of lack of judicial primacy is present in the 2020 Rules as well.

Illustratively, let us compare the composition of committee for CAT under the 2017 Rules and 2020 Rules. 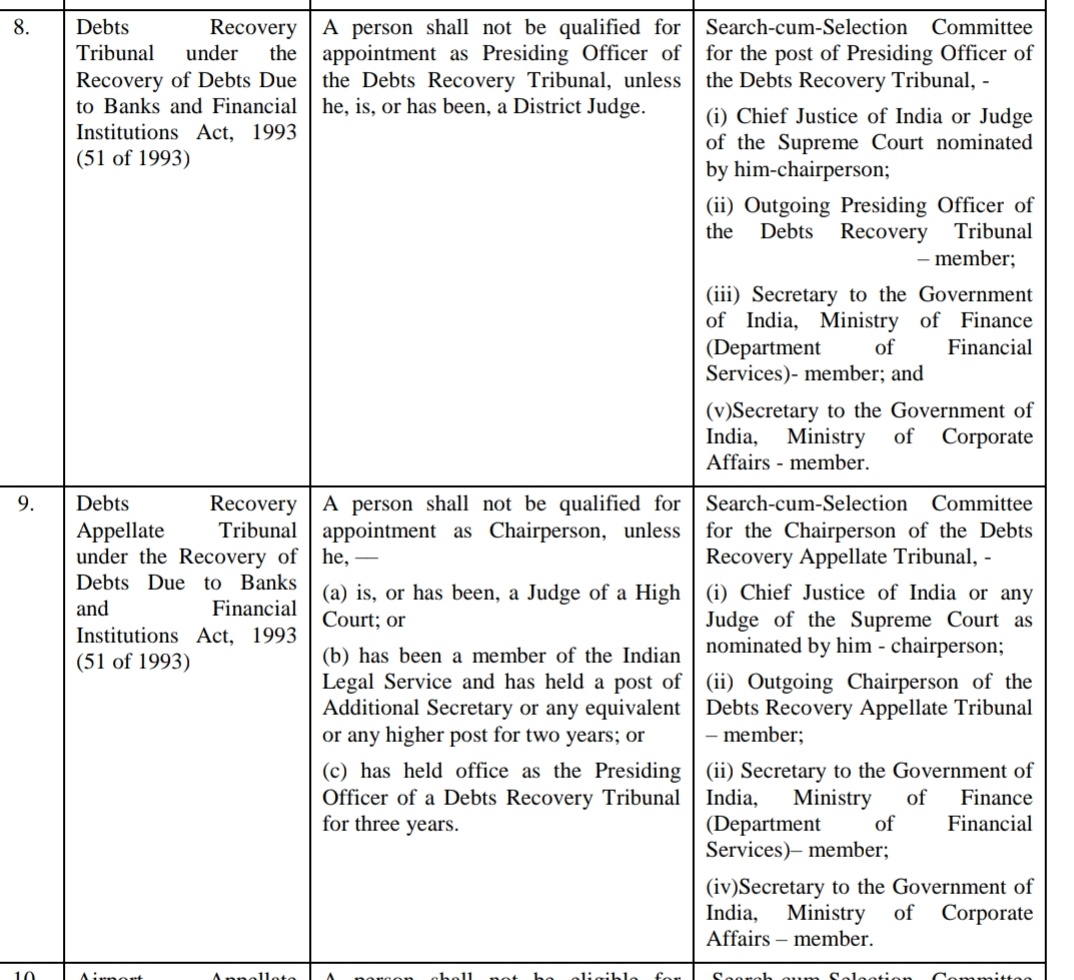 Does this composition solve the problem of lack of judicial dominance which was highlighted in the Rojer Mathew case?

Before looking for an answer to that question, let us look at a suggestion made by the Supreme Court in another case -Union of India v R Gandhi, President, Madras Bar Association(2010)- regarding the ideal composition of a selection committee for a Tribunal.

In the case Union of India v R Gandhi, President, Madras Bar Association(2010), a Constitution Bench of the Supreme Court was dealing with the challenge against the constitution of NCLT/NCLAT under the Companies Act 1956.

The Constitution Bench in R Gandhi said that instead of this 5-member Committee with limited role for judiciary, the Selection Committee should ideally consist of :

Since the case was pertaining to NCLT/NCLAT, Secretary in the Ministry of Finance and Company Affairs was included. This position will be replaced by Secretary from the concerned Ministry/Department in case of other Tribunals.

This 4-member composition with two members from judiciary was approved by a subsequent Constitution Bench decision in the Madras Bar Association Case (2014) which held the National Tax Tribunal to be unconstitutional.

In that case, the Constitution Bench observed that giving predominance to Secretaries of Departments of Central Government in appointment process cannot be accepted as the Central Government was the major litigant before the Tribunals.

"The Central Government is the largest litigant before the tribunals constituted under various statutes. The independent functioning of the tribunals stands compromised where the executive has the controlling authority in the selection of members to the tribunals", the SC observed in Rojer Mathew case as well.

A cursory glance of the Schedule of the 2020 Rules will show that this problem of executive dominance in Selection Committees has not been cured.

What are the changes made in 2020 Rules?

The Supreme Court had pointed out several anomalies in the qualifications prescribed for the members of Tribunals under the 2017 Rules.

This clause has been omitted in the 2020 Rules.

Another anomaly pointed out by the Court was that the Rules treated SC judges ,HC judges and District Judges equal by making them all eligible for appointment as Presiding Officers.

The Court had also illustrated the example of the composition of Appellate Tribunal under the Smugglers and Foreign Exchange Manipulators (Forfeiture of Property) Act, 1976, which stated "The Chairman of the Appellate Tribunal shall be a person who is or has been or is qualified to be a Judge of a Supreme Court or a Judge of a High Court".

The SC was not at all impressed with this provision. The then CJI Ranjan Gogoi observed in the judgment on this aspect as follows :

"It appears to us to be incomprehensible as to how both Supreme Court and High Court judges can be eligible for the same post when their experience, exposure, knowledge and stature under the Constitution are vastly different and the two do not form one homogenous class".

Taking note of this, the 2020 Rules has substituted "Judge of High Court" with "Chief Justice of High Court" in the qualification criteria for the said Appellate Tribunal.

The Court had also found that the removal process under 2017 Rules vested too much power on the Central Government. The Rules enabled Centre to remove any member on the basis of a recommendation by a Committee constituted by the Centre itself. The composition of committee was left undefined in the Rules. This was not appreciated by the Court as it left the Tribunal members at the mercy of Centre.

Also, Rule 4(2) of the 2017 Rules provided that the Secretary to the Government of India in the Ministry or Department under which the Tribunal is constituted shall be the convener of the Search-cum-Selection Committee. This was found to be invalid by the Court as violative of the principle of separation of powers.

This provision has been omitted in the 2020 Rules.

Further, the provision in 2017 Rules which gave Centre the power to offer relaxations in Rules in specific cases has been omitted in 2020 Rules following the concerns flagged by the Court.

The 2020 Rules also provide a fixed term of four years to the Tribunal members, based on Court's observations that the three year term under the 2017 Rules was ineffective.

The condition in the 2017 Rules that the members will be eligible for re-appointment has also been dropped in 2020 Rules based on Court's apprehension that such a clause was likely to affect a member's independence.

Despite the above mentioned changes, the substantive flaw pointed out by the Court in the 2017 Rules- the upper hand for executive in the matter of appointments - is present in the 2020 Rules as well.

The observation in Rojer Mathew case regarding the 'token representation' of CJI in Selection Committees is applicable to the new Rules too.

Despite the specific direction by the Court that the Rules should be re-formulated in accordance with the guidelines in R Gandhi and Madras Bar Association decision, the Rules did not incorporate the suggestion in R Gandhi case regarding the ideal composition of Selection Committee (4-member Committee with two representatives from judiciary and casting vote for CJI).

"The constitution of the Search-cum-Selection committees stipulated in the 2017 Rules violates the principle of judicial independence and the directions issued by this Court in R Gandhi and Madras Bar Association" - this observation of Justice Chandrachud in Rojer Mathew case will hold good in case of 2020 Tribunal Rules as well.

In R Gandhi, the Court had also observed that that suspension of the President/Chairman or member of a Tribunal can be only with the concurrence of the Chief Justice of India.

There is no provision in the 2020 Rules to incorporate this direction.

There was a further direction in the R Gandhi case that the administrative support for all Tribunals should be from the Ministry of Law and Justice and that neither the Tribunals nor their members shall seek or be provided with facilities from the respective sponsoring or parent Ministries or Department concern. This direction, made with the intention of preserving the independent character of Tribunals, also remains to be implemented.

Therefore, the Tribunal Rules 2020 do not offer much hope for advancing the cause of independence of Tribunals.