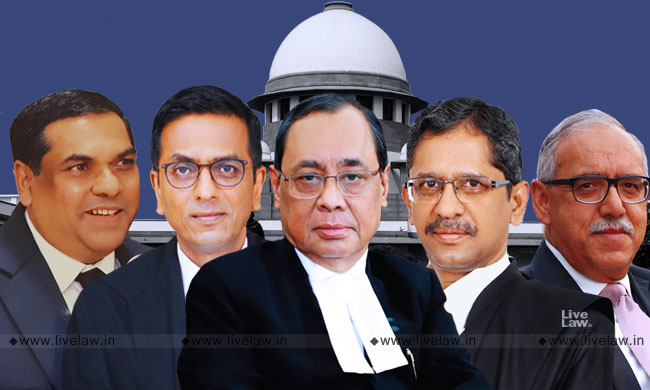 The Supreme Court on Wednesday upheld the constitutional validity of Section 184 of the Finance Act 2017, which empowers the Central Government to frame rules relating to appointment and service conditions of members of various tribunals.

At the same time, the five judges bench struck down the Rules already framed by the Central Government under Section 184, and directed the formulation of new rules.

The Court passed an interim order that the appointments of members of the tribunals should be carried out as per their respective parent Acts till the Centre comes up with new rules under Section 184.

On the point whether Finance Act 2017 could have been passed as a money bill, the Court said that examination by a larger bench was necessary and referred the same.

The judgment authored by CJI Gogoi for himself, Justices Ramana and Sanjiv Khanna observed that judicial impact assessment of tribunals was needed. The Centre should revisit the provisions of the Finance Act. It can consult the Law Commission of India, if needed. The existing tribunals can be amalgamated on the basis of homogeneity

Justice Chandrachud, who wrote a separate but concurring judgment, observed that method of appointment has impact on independence of judiciary. Tribunals have been conceptualized as a specialised body. Keeping this in mind, appointment is to be a legislative function. He reminded the Government that the direction in L Chandrakumar case for constitution of  National Tribunal Commission as an umbrella organisation to oversee tribunals has not been implemented.

On the issue of money bill, Justice Chandrachud concurred with the decision to refer the same to larger bench. Rajya Sabha should not be circumvented as it reflects plurality of nation and balance of power.

On April 10, the Constitution Bench comprising CJI Ranjan Gogoi, Justices Ramana, Chandrachud, Deepak Gupta and Sanjiv Khanna had reserved judgment in the cases of Roger Mathew and Revenue Bar Association regarding the constitutionality of the provisions of Finance Act 2017 which affected the powers and structures of various judicial tribunals such as National Green Tribunal, Income Tax Appellate Tribunal, National Company Law Appellate Tribunal.

Finance Act, which is passed as a money bill, cannot change the composition of tribunals, argued the petitioners. Senior Advocate Arvind P Datar led the arguments for the petitioners' side.

Attorney General K K Venugopal submitted that the Court cannot exercise judicial review over the Speaker's decision to certify a bill as a money bill under Article 110 of the Constitution. Reliance was placed on the decision in Aadhaar case, where the SC had upheld the passing of Aadhaar Act as a money bill.