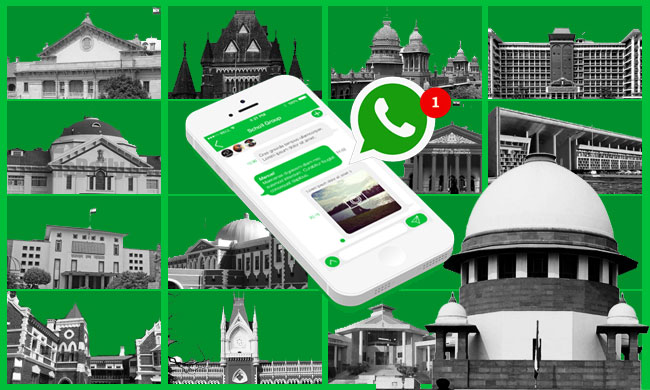 x
In these times when most people have smart phones armed with 4G technology, e-service will be an effective and viable option.

It is truly exasperating, when some prime facets of our legal system are not in consonance with the changing scenarios. The austerity of certain procedures prescribed by the law, reluctance to adapt to the advancement of the time, and over-enthusiasm of the judicial institutions in preserving conventional practices are few issues that are worth mentioning. Amidst all these,...

It is truly exasperating, when some prime facets of our legal system are not in consonance with the changing scenarios. The austerity of certain procedures prescribed by the law, reluctance to adapt to the advancement of the time, and over-enthusiasm of the judicial institutions in preserving conventional practices are few issues that are worth mentioning. Amidst all these, revolutionary judgments like Kross Television India Pvt Ltd and Tata sons Ltd.etc are true encouragements for thinking in tune with the  advancement of technology.

Issue and service of summons are important steps in litigation. It communicates to the defendant about the action initiated against him in a court of law and  alerts him about his right to defend. The modus operandi of serving summons over the period of time is dissimilar and often discordant. An extravaganza backed by wild drum beats, animals and soldiers moving from street to street and reading the message of the king out loud was the practice that prevailed in the past.

The present manner in which the summons is served ,though it lacks the 'gala', is still primitive in one sense. Personal service or summons by post at the address of the defendant has become a rigid norm, from which Courts are generally reluctant to deviate. If these means fail, Courts opt for substituted service, which include affixure of summons at the defendant's address or by paper publication.

Courts are yet to embrace fully the technological advancements in the form of e-mail or messenger apps like Whatsapp to effect service of summons.  An appropriate and convenient practice devoid of rigidity and complexity is the real need of the hour.

Order V of the Code of Civil procedure, 1908 is articulating the procedures related to the issue and service of summons. A critical examination of the same will draw the conclusion that the shortfall is not within the law but lies in the absence of its constructive implementation in tune with the changing time.

The proper officer may be an officer of a court other than that in which the suit is instituted, and, where he is such an officer, the summons may be sent to him in such manner as the court may direct.

Hence, the power to determine the modus of serving the Summons is exclusively vested upon the court. Also Order V Rule IX(3) is also suggestive of certain means of transmission of documents such as fax message or electronic mail services.

Some recent judgments reflect a positive change in judicial mindset towards technology. Justice G.S.Patel of the Bombay High Court in Kross Television India Pvt Ltd &Anr vs VikhyatChithra Productions &Ors highlighted the need to change the mode of service of summons, in tune with new-age technological developments.

"….. that our rules and procedures are either so ancient or so rigid (or both) that without some antiquated formal service mode through a bailiff or even by beat of drum or paattki, a party cannot be said to have been 'properly' served. The purpose of service is put the other party to notice and to give him a copy of the papers.", Justice Patel remarked.

In an Execution Application filed before the Bombay High court( SBI Cards &Payment Services Pvt Ltd), the respondent tried to dodge the service of notice filed under Order XXI Rule 22 of the Code of Civil Procedure 1908. Considering the scenario, Justice G.S.Patel accepted the PDF file of the notice send to the whatsapp number of the respondent as a valid mode of service. He further reasoned as:

" …by sending a PDF and message to [defendants ] mobile number as a WhatsApp message. For the purpose of service of Notice under Order XXI Rule 22, I will accept this. I do so because the icon indicators clearly show that not only was the message and its attachment delivered to the Respondents number but that both were opened"

A recent order delivered by the Bombay High Court on 18th January ,2019 in the matter between Meena Prints Pvt Ltd v. Vahini Enterprises and Anr is a prime precedent for effective application of Order V Rule IX. The matter was related to a trademark infringement and passing off and in the concerned order Justice S.J.Kathawalla summoned defendants through whatsapp, after repeated failure of traditional means of service.

"perused the Chamber Order and the Affidavit filed in support thereto. For the reasons set out thereinMs.LavinaKripalani is discharged from appearing as the Advocate of the plaintiff in Admirality Suit No.44 of 2010. A copy of this order shall be forthwith served on the plaintiff by the Advocate for the Plaintiff who is just discharged, by email and /or speed post and / or Whatsapp"

In Monika Rani and Another v.State of Haryana and others ,a case concerning "Run away marriage" ,the father of petitioner no.1 prayed for a copy of the FDRs be sent to him on his mobile phone through 'WhatsApp' message. The Punjab-Haryana High court, keeping in mind the circumstances of the case, ruled in favour and directed to send the copy of the FDRs as Whatsapp message.

Justice Mridula Bhatkar's observations in Dr.Madhav VishwanathDawalbhakta vs M/s Bendale Brothers are timely and propitious, as they expanded the scope of substituted service to include summons by whatsapp, email etc.

"thus in Sub rule (i) and (ii), the substituted service means fixing the copies of the summons on different place as mentioned in the Rule. However, the sub- rule (iii) gives further option that the summons can be served in such other manner as the court thinks fit. Thus, the manner which the courts opts for should be akin to the earlier mode of service, which is mentioned in the Rule. For this , the court can take into account the modern ways of service which are available due to internet connection. It can be served also by courier or by email or by whatsapp etc.", Justice Bhatkar observed.

Last year Gujarat High Court on a criminal appeal took its stand that in cheque cases if situation demands the accused can remit the amount directly to the complainant's bank account through online mode and correspond to the court by electronic mail. Justice Sonia Gokani's judgment that highlights the effect of modern technology in lessening the burden of litigants involved and the system as a whole.

The Apex Court also in multiple occasions has shown encouraging gestures that amalgamates judicial proceedings with technological advancement. In a landmark judgement of Indian Bank Association and others v. Union of India and others, the Supreme Court issued guidelines for expedited finish of cases related to Section 138 of Negotiable Instruments Act,1881 and among the guidelines the court gave much attention to possible and sober approaches while issuing summons. Also the court suggested that the summons must be adequately addressed and send through post and electronic mail.

THE QUESTION OF CONVENIENCE

The practice of serving summons abreast with technological advancement is a big answer to the question of convenience. In Kross Television India Pvt Ltd, it was observed:

" [defendants] believe they can resort to these tactics to avoid service, they are wrong. They may succeed in avoiding a bailiff. They may be able to avoid a courier or a postman. They have reckoned without the invasiveness of information technology. [defendant] in particular does not seem to have cottoned on to the fact that when somebody calls him and he responds, details can be obtained from in-phone apps and services, and these are very hard to either obscure or disguise. There are email exchanges. There are message exchanges. None of these to my mind establishes that the Defendants are not adequate…… "

The above mentioned is a firm response of the court to a flawed tactic that the defendants in a copyright infringement suit played to avoid the service of summons issued against them. And the court identifies the modern means of service as an effective remedy to overcome similar bearings.

We have 24 high courts and more than three thousand District and Taluk court complexes. The judge to population ration is not even near to a balance, that literally means one judge for many millions. As per information from e –Court services India, the total number of pending cases cross more than 4 million in High Courts and more than 26 million in various District and Taluk courts collectively. These disturbing statistics are really a burden to our entire legal and court systems. Money, matter and minutes of the State and the individual are being mercilessly pledged in this bewildering scenario.

The growth rate and progress of a country is definitely linked with the adaptability and performance of its courts and allied institutions. And a punctured court system will always paint black in every development index in which a country is competing. The effective implementation of technology can to an extent reduce the gravity of the present context.

In a case that demands urgent interim action, justice may only be dispensed when the court acts freely within the ambit of law considering the material facts and circumstances, avoiding the yardsticks of judicial orthodoxy. In these times when most people have smart phones armed with 4G technology, e-service will be an effective and viable option.

(Viswajith Anand is an advocate based in Thiruvananthapuram. Views are personal).