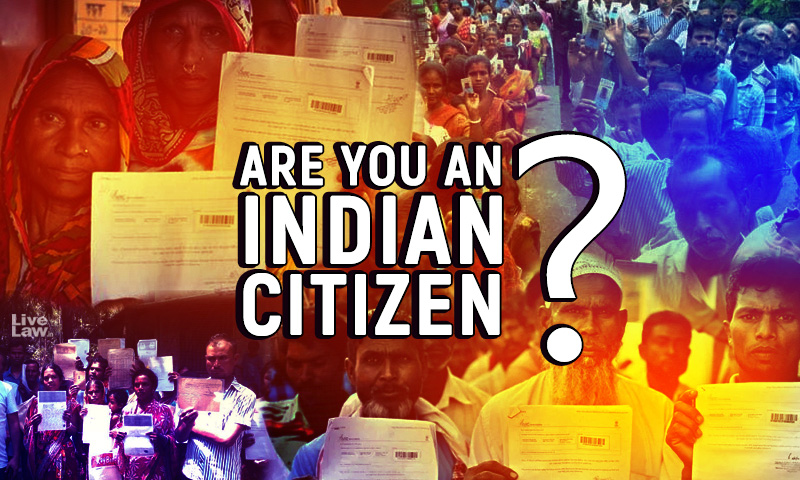 Reports about two recent judgments of Gauhati High Court on citizenship created widespread shock and surprise.On February 12, a division bench of the High Court upheld a Foreigners Tribunal's declaration of one Munidra Biswas as a foreigner by observing that electoral photo identity card is not a proof of citizenship.On the same day, the same bench comprising Justices Manojit Bhuyan...

On February 12, a division bench of the High Court upheld a Foreigners Tribunal's declaration of one Munidra Biswas as a foreigner by observing that electoral photo identity card is not a proof of citizenship.

On the same day, the same bench comprising Justices Manojit Bhuyan and Parthivjyoti Saikia held 50-year old Jabeda Begum to be a foreigner by observing that PAN card, bank documents, land tax receipts etc are not sufficient to prove citizenship.

Meanwhile, on February 11, a trial court in Mumbai acquitted two persons of charges under Foreigners Act 1946 by holding electoral id card to be a sufficient proof of citizenship.

In this context, it is important to note that the judgments of Gauahti High Court were rendered in the particular context of Assam Accord, as per which inclusion in the National Register of Citizens (NRC) is conditional on proving one's residence or ancestry beyond back the cut-off date of March 24, 1971 on the basis of certain specified documents (more on this in the later part of this article).

Understandably, these decisions, coming amidst country wide agitations against the Citizenship Amendment Act 2019 and the proposed nationwide National Register of Citizens,  led to a lot of confusion.

"Which all documents can prove Indian citizenship?" - this became a raging debate in social media.

No govt decision on acceptable documents for citizenship

The confusion on this topic is compounded by the fact that even the Government is not clear about what all documents would be acceptable in establishing citizenship.

A press release issued by the Central Government in December last year stated that no decision has been taken yet on the documents which are acceptable as proof of citizenship.

Sounding tentative, the press release, issued with the purported aim of clearing doubts about CAA-NRC, said that such documents are likely to include "voter cards, passports, Aadhaar, licenses, insurance papers, birth certificates, school leaving certificates, documents relating to land or home or other similar documents issued by government officials".

It was said in the press release :

Citizenship can be proved by submitting any documents related to date of birth and place of birth. However, a decision is yet to be taken on such acceptable documents. This is likely to include voter cards, passports, Aadhaar, licenses, insurance papers, birth certificates, school leaving certificates, documents relating to land or home or other similar documents issued by government officials. The list is likely to include more documents so that no Indian citizen has to suffer unnecessarily.

The relevance of birth details

One sentence from the above press release - "Citizenship can be proved by submitting any documents related to date of birth and place of birth"- is of high importance. The basis of this statement can be traced to Section 3 of the Citizenship Act 1955 which deals with "Citizenship by birth".

It can be certainly said that 'citizenship by birth' is the mode by which majority of Indians have acquired Indian citizenship.  The other modes of acquiring citizenship are by descent, naturalization and registration (To know more about this, read this article).

When the Citizenship Act was enacted in 1955, Section 3 stated that all those who are born in India on or after January 1, 1950 will be an Indian citizen. Thus, the Indian citizenship law had absolutely accepted the principle of "jus soli(birthright citizenship)", in the beginning.

This principle was later diluted following the amendment in 1986, which limited automatic birthright citizenship to those who were born in India between January 1, 1950 and July 1, 1987.

An added condition that one of the parents must be an Indian citizen was introduced for granting citizenship to those who were born in India after July 1, 1987.

The condition for birthright citizenship was further tightened after 2003 amendment, which stated that those who were born after December 3, 2004 will be eligible for Indian citizenship only if one of the parents is an Indian citizen and the other is not an illegal migrant.

This is how a person's place of birth and date of birth become relevant for Indian citizenship.

A person born outside India has to show Indian descent for claiming 'citizenship by descent'.  Here also, the birth details of parents are relevant.

In this context, the following observation made by the Supreme Court in the case Sarbananda Sonowal v Union of India is noteworthy :

Documents such as driving license, PAN card, Aadhaar etc do not take into account the citizenship of a person. 'Residency' is the factor considered as relevant by the concerned authorities for issuing these documents.

For example, in case of driving license, an applicant is required to furnish proof of address in the concerned state and also proof of age.

Aadhaar, though intended as a national level unique identity marker, is not a proof of citizenship.  Under the Aadhaar Act, a person's residency in India for 182 days prior to the date of application is the relevant factor for issuing Aadhaar number. Even recently also, the UIDAI issued a clarification regarding this.

Aadhaar is not a document of citizenship and UIDAI has been mandated under the Aadhaar Act to ascertain residency of a person in India for 182 days prior to applying for Aadhaar. 4/n

The citizenship of a person is a relevant factor for issuance of Passport. As per Section 6 of the Passports Act, one of grounds for refusing passport is that that the applicant is not a citizen of India.

The Delhi High Court in a 2018 decision took note of the grant of passport to a person as a relevant fact for holding that she is a citizen.

As regards Voters ID card, while applying for it, a person has to file a declaration with the authority in Form 6 of the Registration of Electors Rule 1960 that he is citizen of India. It is taking note of this aspect that a Trial Court in Mumbai recently held that Voters ID was sufficient proof of Indian citizenship.

Nevertheless, there is no official declaration from the government or any binding precedent from Courts that these documents can act as conclusive proof of citizenship.

A reading of Sections 8 and 9 of Foreigners Act 1946 shows that the burden of proving Indian citizenship is on the person asserting the same and not on the State.

The Illegal Migrants (Determination by Tribunals) Act 1983, which was applicable to be State of Assam, had reversed this and held that the onus of proving that a person was not an Indian citizenship was on the State.

The SC held this shifting of burden of proof on the State to be arbitrary and unreasonable and struck down the IMDT Act in Sarbandana Sonowal case.

Facts relating to birth details of oneself and one's parents are in the particular knowledge of a person, and therefore the burden should be on the person to prove these facts for citizenship, the Court observed. According to the Court, this is a "good and sound reason" for placing the burden of proof upon the person concerned.

"This is in accordance with the underlying policy of Section 106 of the Evidence Act which says that when any fact is especially within the knowledge of any person, the burden of proving that fact is upon him", the Court observed.

Under the Assam Accord, all those who had entered India after the cut-off date of March 24, 1971 are regarded as illegal migrants.

Therefore, to become eligible for inclusion in Assam-NRC, it has to be shown that one or one's ancestors had been residing in Assam before the cut-off date.

Following the Assam Accord two different lists of documents have been specified for proving one's eligibility for inclusion in Assam-NRC. First is the List A, which includes 14 documents which are issued before the cut-off date. They are :

By showing that one's name is included in any of these documents issued before the cut-off date, one becomes eligible for inclusion in NRC.

It is important to note that these norms are applicable only to Assam.

No certainty for citizenship?

The cases from Assam show that even if one may have been living in India for decades, by exercising rights which are regarded as ordinarily available for citizens (voting in elections, holding driving license, receiving state benefits, paying tax, doing land transactions etc), one can still be branded "non-citizen".

For example, 50 year old Jabeda Begum was declared foreigner despite producing 15 documents, because she could not prove linkage to pre-1971 ancestors. Mohammad Sanauallah, a Kargil war veteran, was adjudged foreigner for failing the Assam Accord citizenship test.  The final list of Assam NRC published on August 31 last year excluded nearly 19 lakh people.

Therefore, there are valid grounds for the paranoia and distrust about the proposal to extend NRC across the nation. The fact that the Government itself has not been able to come up with clear answers regarding acceptable documents for citizenship has aggravated the concerns of people.

Where a large section of the population is marginalized and backward, the insistence on documents to prove citizenship could lead to exclusions of genuine nationals. According to a study by IndiaSpend, about  38% children under 5 years do not have birth certificates. It is highly unrealistic and utopian to expect that the documents of all Indians are in order.

Is there a presumption of nationality?

In this context, it pertinent to refer to a provision in the Foreigners Act on presumption of nationality of a foreigner.

Section 8 of the said Act provides "where for any reason it is uncertain what nationality, if any, is to be ascribed to a foreigner, that foreigner may be treated as a national of the country with which he appears to the prescribed authority to be most closely connected for the time being in interest or sympathy or if he is of uncertain nationality, of the country with which he was last so connected".

This provision was invoked by the Delhi High Court in the 2018 case Prabhleen Kaur vs Union of India, where the Government had questioned the citizenship of a 24-year old woman based on doubts about the citizenship of her parents. According to the Centre, there were doubts that her parents hailed from Afghanistan, despite their claims of having been born in India.

Rejecting the objections of the Centre to granting her passport, the High Court observed :

The Court also noted that the petitioners' parents had been residing in India for over four decades, and were even issued documents such as passports.

"..the nationality of a person who was admittedly residing in India as a citizen for the last 48 years, cannot be questioned. Raising such issues at this stage is plainly unreasonable and in this Court's view, impermissible", the Court  observed.

The HC also followed the SC decision in Gangadhar Yeshwant Bhandare v. Erasmo De Jesus Sequiria : (1975) 1 SCC 544, where the SC refused to accept the challenge against citizenship of the respondent in the case on the ground that it would render him "stateless".

But the statutory character of the Assam Accord renders humanitarian judgments such as these inapplicable in the context of Assam, where the several persons are being adjudged foreigners for failing the citizenship test, despite their stay in India for years.

The upshot of the above discussion is that there is a looming uncertainty over the documents necessary to prove citizenship. The question 'how to prove Indian citizenship' continues to evade easy answers.