Women In Constituent Assembly : Engaging With The Role Of Hansa Mehta 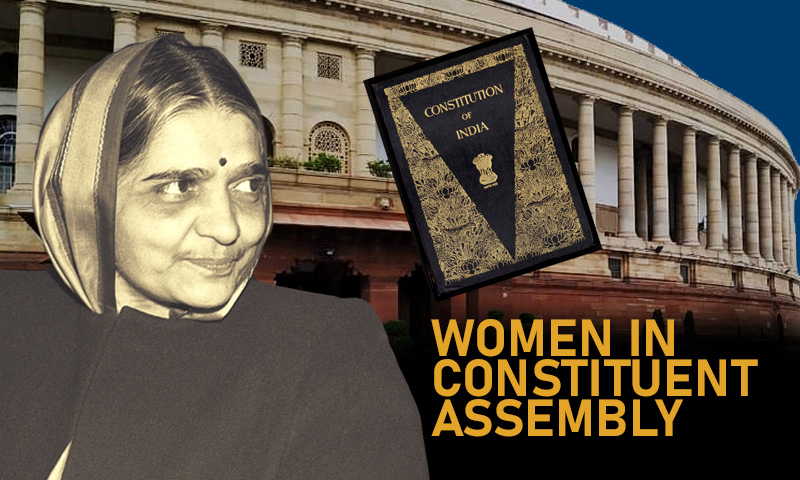 ('Women In Constituent Assembly' series will discuss the role played by women in the Constituent Assembly of India. This is the second article of the series. The first one was about Dakshayani Velayudhan)Constitutions impact women. Even when constitutional provisions appear to be neutral, they impact lives of women differently. From distribution of power amongst Union and States to...

In Indian context too, the story of framing of Indian Constitution has been story of 'founding fathers' minus the 'founding mothers'. Both in academic memory and public memory, the role of women members in the drafting of the Indian Constitution has remained marginalized. While the names of 15 women members of the assembly have become available in public domain with growing interest in Constituent Assembly Debates, yet much is not known about the extent and nature of their participation.

Today I bring to you speeches and interventions of Hansa Mehta, one of the 15 women members of the assembly, whose 123rd Birth Anniversary was marked few days ago on 3rd July.

Born on 3rd July 1897 in Surat, Gujarat, Hansa Mehta (much like other women members), came from a rather elite background. She was daughter of Manubhai Mehta, the Dewan of Baroda state and studied at Baroda and London. She was influenced by Gandhi and was the President of All Indian Women's Conference in 1946, when Charter of rights and duties of Indian women was drafted. She joined Constituent Assembly on 9th December 1946 from Bombay.

Role in various Committees of the Constituent Assembly-

The Constituent Assembly had wide range of committees for various issues ranging from fundamental rights, distribution of power between union and states to rules for functioning of constituent assembly. Hansa Mehta was part of two different committees of the assembly.

She was one of three women member of the 64 member odd Advisory Committee. The Advisory Committee was established as per Cabinet Mission and Congress party's own resolutions and was chiefly tasked with submission of reports on fundamental rights, minority rights and administration of tribal and excluded areas.

Representation of flag on behalf of 'women of India'-

14th August 1947, one day before Indian independence, marked an important day for the Constituent Assembly.[2] The assembly victoriously spoke about freedom struggle and freedom from the foreign rulers the next day and observed two-minute silence for the freedom fighters who sacrificed themselves for Indian freedom.

On this occasion, amidst cheers from the assembly members, Hansa Mehta presented national flag 'on behalf of women of India'. This presentation was result of a Flag Representation Committee which had 100-prominent women of India as its members. Apart from all the 15 women members of the assembly, the committee had various other elite women of that time- Mridula Sarabhai, Sophia Wadia, Mithan Jamshed Lam, Janki Ben Bajaj and even Indira Gandhi.

Observing that it is in 'fitness of things' that first flag should be 'gift from women of India', Hansa Mehta observed-

"In presenting this symbol of our freedom, we once more offer our services to the nation. We pledge ourselves to work for a great India, for building up a nation that will be a nation among nations. We pledge ourselves for working for a greater cause, to maintain the freedom that we have attained. We have great traditions to maintain, traditions that made India so great in the past. It is the duty of every man and woman to preserve these traditions so that India may hold her spiritual supremacy over the world."

This statement warrants a critical inquiry. Who are the 'women of India' on whose behalf the flag was presented? What is symbolic value of this episode for women in post-constitutional India? What does assertion of glorious Indian traditions as refereed in Mehta's statement have for women? Indian freedom struggle has been argued to be continuously differentiating between Indian women from western women; Indian women are supposed holders of India's spiritual superiority.[3] What do these beliefs of a leading women framer of the Constitution mean for women of the country?

In fact, this is not the first time Mehta evoked 'spiritual superiority' of India. Speaking on the Objective resolution, which later became Preamble of the Constitution, she asserted that she is speaking for 'fundamental rights of women'. In her speech then she spoke of role of women in attainment of 'rightful place' of 'ancient land' of India. She observed that the inequalities of women of India are result of 'laws, customs and practices of people who have fallen from the heights of that civilisation of which we are all so proud.'[4]

The assertions of a golden ancient civilization, spiritual superiority warrant scrutiny in their impacts on women in constitutional order.

Rejection of Special Provisions for Women

The women members of the Constituent Assembly spoke in unanimous voice against any kind of special treatment for political participation of women.[5] During the freedom struggle too women leaders of the Constituent Assembly remained against separate electorates and reservations at various platforms. The political culture during freedom struggle saw special treatments of any kind as a taboo, and as an attempt towards separation and against unity. Thus the question of special provisions for women's political sphere was also seen as 'extension of a wrong principle into women's sphere'.[6]

Hansa Mehta too belonged to the same league. Speaking on the Objective Resolution on 19th December 1946 she shared her pride in belonging to a women's organization which has never asked for reserved seats, quotas or separate electorates. She said-

"…….we have never asked for privileges. The women's organisation to which I have the honour to belong has never asked for reserved seats, for quotas, or for separate electorates. What we have asked for is social justice, economic justice, and political justice. We have asked for that equality which can alone be the basis of mutual respect and understanding and without which real co-operation is not possible between man and woman."[7]

From 11th November 1949 to 26th November 1949, the draft Constitution was presented before the Constituent Assembly for its adoption and members.[8] During this time, Hansa Mehta in her speech, called it a 'miracle' that an agreement in form of Constitution could be achieved, given the 'circumstances' Constituent Assembly was placed in and given the 'divergent views' in the assembly. She argued that 'in spite of all the complicated problems', the assembly has not 'done badly'. On this occasion, she also touched upon two Directive Principles of State Policy- prohibition and uniform civil code.

However the most important lesson from her speech on adoption of Constitution is her insistence on role of people in working of a constitution. She says-

He called upon the house to unanimously accept his decision. On being questioned whether he is oppressed by women as to ask for protection from them, he explains through example of cows that if cows are allowed to live as they like, then cow would be really a source of danger and it will be necessary to protect ourselves against them. He argues that he would regret if any feeling of pushing women forward is left amongst men since "it is foolish man who give them votes, send them to legislatures and thus create troubles like troubles created in matter of the Hindu Code."

"The world would have thought very little of the men if they had asked for protection against women in this Constitution; I am very happy to see that the Constitution does not include that provision. Otherwise men would have had to hide their faces before the world."

Similar objections were also raised by Purnima Banerji who reminded the assembly that women are equal partners of the new national life and its national building project. It is telling that right before two days of the adoption of the Constitution, two women member had to remind the house that the question of women's concern shall not be taken with levity and lightness.

Thus, Hansa Mehta was one of the important voices of Constituent Assembly. Her positions and arguments in the Assembly on inter-religious marriages, questions of equal inheritance, political reservation continue to impact women of this country. We require a critical engagement with her wide ranging interventions.

(Surbhi undertook her LL.M. Dissertation research on feminist critique of Indian Constituent Assembly. She taught the same as seminar course at National Law University, Delhi in Spring semester 2020. She can be reached at [email protected])

[8] These proceedings have been recorded as Volume 11 of Constituent Assembly debates.