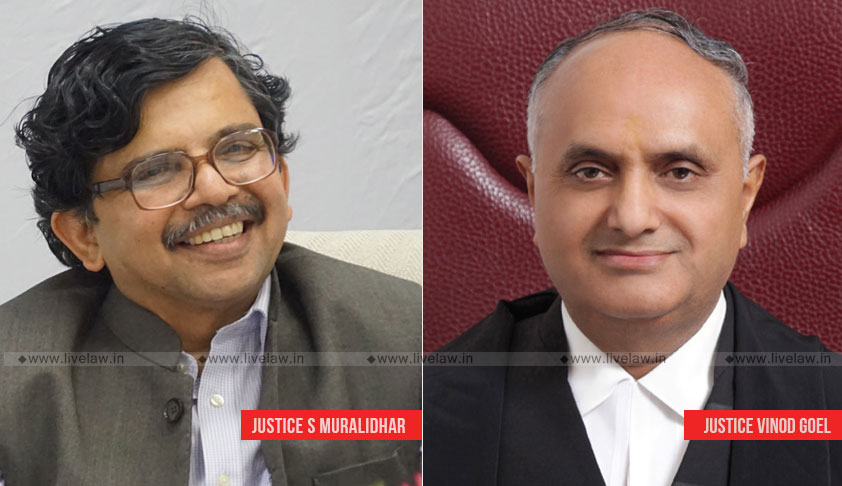 ‘Meanwhile, the rights against arbitrary denial of life and liberty of persons continue to be violated with impunity.’The Delhi High Court has issued a series of directions to ensure that the provisions of Sections 107 and 151 of the Code of Criminal Procedure, 1973 are not abused or misused by the Special Executive Magistrates and Police.The division bench of Justice S. Muralidhar...

‘Meanwhile, the rights against arbitrary denial of life and liberty of persons continue to be violated with impunity.’

The Delhi High Court has issued a series of directions to ensure that the provisions of Sections 107 and 151 of the Code of Criminal Procedure, 1973 are not abused or misused by the Special Executive Magistrates and Police.

The division bench of Justice S. Muralidhar and Justice Vinod Goel issued directives in a habeas corpus plea filed by Advocate Aldanish Rein, seeking to produce Narender detained in Tihar Jail. He alleged that Narender was booked under Sections 107 and 151 of the Code of Criminal Procedure (Cr PC) and thereafter produced before the Special Executive Magistrate. On the same date, the SEM remanded Narender to judicial custody without supplying any documents or even any copy of the order. Even the relatives of Narender were not informed of his arrest.

Perusing the materials, the bench concluded that the arrest of Narender and his judicial remand orders were illegally passed by the SEM. The Government of NCT of Delhi was also directed to pay Narender compensation of Rs.25, 000.

The bench observed that the rights against arbitrary denial of life and liberty of persons continue to be violated with impunity.

It said: “The Court expresses its doubts whether the SEMs who are exercising the above powers are even aware of the requirements of Articles 20, 21 and 22 of the Constitution. They also do not appear to be aware of the requirements of the LSAA or the schemes announced by the National Legal Services Authority (NLSA) or the DSLSA. All of the above provisions in the Constitution of India and the CrPC as explained by several decisions of the Court and the LSAA appear to remain on paper.”

“The Court is concerned that this should not become another judgment where a large number of directions have been issued, reiterating the earlier directions in the firm hope that the behaviour on the ground will change. Enough has been said on the matter of misuse,” the bench said while issuing the following directives:

i. As far as the NCT of Delhi is concerned, the Lieutenant Governor (“LG‟) will consider setting up an oversight mechanism to periodically review the exercise of powers by the SEMs under Sections 107 and 151 CrPC. Such a mechanism can consist of retired District Judges. Corrective action requires to be taken to check the abuse of powers. The LG will also consider calling these public officials as Special Executive Officers rather than SEMs as the appellation Magistrate is likely to be mistaken for a Judicial Magistrate which SEMs clearly are not. They are, at present, invariably police officers who simultaneously function as ACPs.

ii. Since the arrest is only “preventive‟, the LG will consider issuing instructions to the prison authorities to create separate spaces within the jail so that the persons who are arrested are not mixed up with the other persons arrested for actual commission of offences.

iii. The period of judicial custody under Sections 107/151 CrPC at any one given point in time will never exceed more than seven (7) days. There must be a weekly review by the SEMs exercising the powers concerned, of the need to continue detention.

iv. In particular, after directing the release of a person upon furnishing a personal bond and not insisting on surety where such a person is not in a position to furnish surety, the SEM’s task will not end. The SEM will keep the matter pending for follow-up on whether the person has actually been released on having furnishing a personal bond and/or surety. If within two days of the order of release, if a person has actually not come out of the jail, the SEM should inquire into the situation and pass further orders to ensure the release of such persons by either accepting a personal bond of such person and/or surety of a lesser sum, if at all, that can be afforded by such person.

v. No order of remanding a person to a judicial custody can be passed by the SEM without satisfying himself:

b. The SEM must ask the person arrested whether he has been informed, in the language understood by him, of the grounds of his arrest and this record this in the order that he is going to pass.

c. The SEM will ask the person whether he wishes to engage a lawyer of his choice and also inform him that he can avail the services of a remand advocate who will remain present when these proceedings are being conducted.

e. The SEM will ensure that the remand advocate is performing his functions as required under the LSAA i.e., he is also a person aware of the constitutional rights of a person arrested and will act accordingly.

f. The SEM will record in his proceedings that all of the above provisions have been effectively complied with.

vi. Despite the numerous orders passed and reports given by LCI and NHRC, the ground situation does not appear to have changed. One clear pointer is to the lack of the training of the SEMs in the provisions of the Constitution and the CrPC and the various judgments pronounced by the courts from time to time. Consequently, the following directions are issued by the court:

a. Not later than from two months from today, the DSLSA in association with Delhi Judicial Academy will conduct a three-day training workshop for a batch of at least 20 SEMs who are currently holding those positions and train them on the constitutional requirements of their role. The background reading material prepared will comprise the aforementioned decisions of the court with the reports of the LCI, NHRC as well as this decision and a detailed set of instructions as to how the SEMs should exercise the powers under Sections 107 and 151 CrPC and even the model orders that they could follow.

b. The training, apart from lectures, should involve engaging the participants in role play so that there is a practical hands-on experience of how to deal with a real-life situation.

c. The participants in the training workshop will also include the ACPs of the different areas. Former police officers of senior ranks, former District Judges and former IAS officers will all form part of the resource persons to impart such training apart from former academics, serving judges and senior lawyers well-versed in the area of criminal law.

vii. The Principal Secretary, Home will periodically visit the Courts of SEMs on a spot checking on a surprised check basis accompanied by the Secretary, DSLSA, to ensure that the misuse of the powers of the SEMs is curbed. This should happen at least once or twice every month.

ix. A board should be placed outside the office of the SEM not only in English and Hindi but also in other languages spoken by a sizeable population in the area concerned which would display the requirements under law i.e., the Constitution, the CrPC and the LSAA. It will caution the person arrested to beware of touts. The board will also display the name of the remand advocate along with his/her contacts and details. The board will inform the person arrested that the amount to be filled in a bail bond is not to given in cash to anyone and that the SEM is not a judicial magistrate.

x. The Superintendent of the Tihar Jail, the Rohini Jail and the Mandovi Jail will ensure that whenever a prisoner is received as a result of the judicial remand order of the SEM, such prisoner shall not be kept in the same ward or in the same place where other undertrials or convicts are kept, but in a separate wing and provided easy access to the legal aid counsel, particularly of lawyers from the DLSA.