Delhi HC issues notice on a PIL filed by Prof. Shamnad Basheer, seeking overriding powers of RTI Act against other Statutes and for declaring S.144 of Patent Act ultravires [Read the Petition] 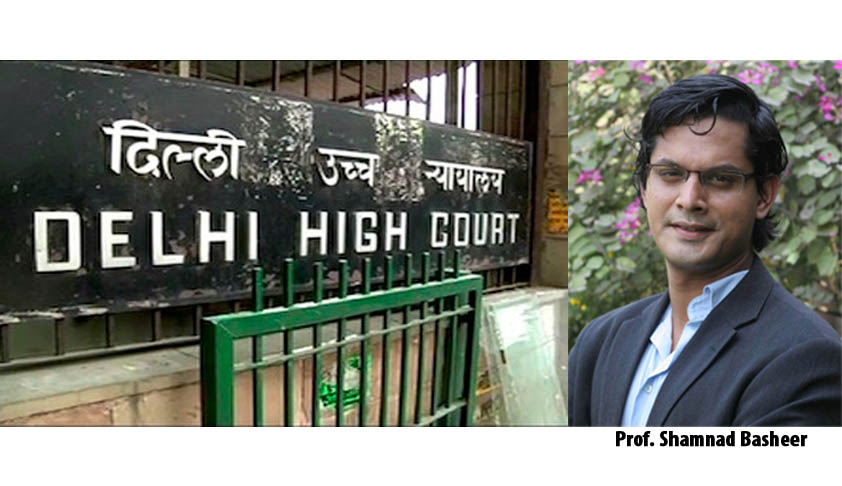 Delhi High Court today issued notice in a Public Interest Litigation filed by Prof. Shamnad Basheer, founder of SpicyIP and leading academician in the country, with path-breaking research in the field of Intellectual Property Rights, praying inter alia to declare that the mechanism under the Right to Information Act, 2005 overrides all other mechanisms under any other statute or rule...

Delhi High Court today issued notice in a Public Interest Litigation filed by Prof. Shamnad Basheer, founder of SpicyIP and leading academician in the country, with path-breaking research in the field of Intellectual Property Rights, praying inter alia to declare that the mechanism under the Right to Information Act, 2005 overrides all other mechanisms under any other statute or rule for discharge of information from public authorities to the extent of inconsistencies therein and to declare  Section 144 of the Patents Act, 1970 is ultra vires the Constitution of India

Senior Counsel Salman Khurshid appeared for Prof. Basheer and opened arguments in the matter today  pointing out how the RTI mechanism was being frustrated by Government agencies. He was accompanied by joy Basu senior counsel.  The court issued notice to the government. Matter posted to 29th October and the government has been given time to respond by then.

The petition also praying the acceptance of the RTI applications which were rejected on the ground that there is already an information dispensation mechanism provided under the Patents Act, 1970 and Rules, enacted prior to the RTI Act. This has been alleged to be violative of Article 14, 19 and 21 of the Constitution of India, apart from the provisions of the RTI Act.

Prof. Basheer sought to investigate the status of “commercial working” of certain patented drugs in India, used in treatment of several life threatening diseases such as Cancer, AIDS, Diabetes and Hepatitis. Pursuant to this, the Petitioner requested for certain public information held by Controller General of Patent, Designs & Trade Marks as the same was not available in the public domain.

The petition alleges that the provisions of the Patents Act are thoroughly inconsistent with the scheme and object of the RTI Act and contravene the constitutional mandate to promote easy and affordable access to public information.

It also submits that the decision in the case of Registrar of Companies & Others v. Dharmendra Kumar Garg & Another, where the court held that the provisions of the RTI Act are inapplicable due to the presence of pre-existing mechanism under the Companies Act, 1956, is bad in law.

It seeks a declaration that Section 144 of the Patents Act, 1970 is ultra vires the Constitution of India.

It also submits that mechanisms prior to RTI Act do not adequately safeguard citizens’ constitutional right to information, adding that there is a significant difference in chargeable fees for obtaining information under the RTI Act and Rules in comparison to Patents Act and Rules.

The petitioner contends that the undated public notice, which directed them to visit their official website to get the information requested by them, is illegal, arbitrary and does not have the force of law.

It is further submitted that there is no provision or procedure under the Patents Act and Rules which entitles the public to obtain patent working information submitted as per Section 146(2) read with Rule 131, i.e. FORM-27.

Form 27 is a declaration by the patentee or its licensee(s), describing the extent of commercial exploitation, alternatively called "working of the patent" in India in the past calendar year. Form 27 needs to be filed in relation to each granted patent.

The online database providing free public access to FORM-27s is very limited and provides information only for the calendar year 2012 and 2013.

Hence, the quashing of the undated public notice tilted ‘Information under Public Domain’ is sought in the petition.

The petition seeks a declaration that the mechanism under the Right to Information Act, 2005 overrides all other mechanisms under any other statute or rule for discharge of information from public authorities to the extent of inconsistencies therein.

The petition is filed through Advocate Sai Vinod and ​Abhimanyu bhandari

Talking to LiveLaw about the scope of the petition, Prof. Shamnad stated, “Both Sai and me have been RTI crusaders for a while now, and as part of our work with SpicyIP and P-PIL, we've deployed the RTI mechanism to the hilt in exposing deep flaws with our current IP regime and administration. We understand the potency of the RTI and are very keen in ensuring that it is not frustrated by government agencies. Unfortunately our patent office appears more keen on making money through this process and have begun charging a ransom for access to valuable patent information. They also appear to be deliberately delaying our request for information on sensitive pharmaceutical drugs. Despite 7 months going by, they have not responded to my RTI asking for vital information on important anti cancer and anti HIV drugs patented by MNCs.  Such information is really critical for our debates on patents and public health and disclosure of such information lies at the very heart of the patent system.”

Mr. Basheer stated,“I must say it is an extremely proud moment for me to have Sai Vinod, my student whom I taught not so long ago, represent me as my lawyer in this matter. In fact it was Sai who prompted me to file this and did most of the wonderful leg work that made this PIL possible. I also want to thank Abhimanyu Bhandari (we did the BCL together at Oxford) for taking this up probono without batting an eye lid. And for roping in two terrific senior counsels Salman Khurshid and Joy Basu. Thanks also to Abhimanyu's junior Anchal for her work on this. I cannot thank them all enough for taking up this important matter on a pro bono basis. We need more such lawyers who are public spirited champions!”

The verdict will be a certainly be a milestone settling the inconsistencies in the law in any and hence, will be eagerly awaited.