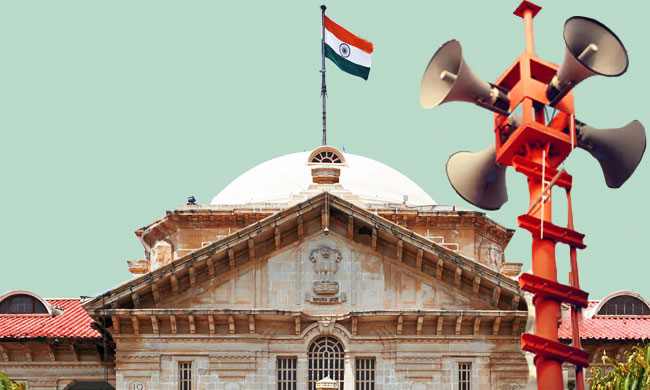 The Allahabad High Court on Tuesday imposed absolute prohibition on use of DJs in the state and asked the state government to issue a toll-free number, dedicated to registering complaints against illegal use of loudspeakers.

"…noise generated by DJ is unpleasant and obnoxious level. Even if they are operated at the minimum level of the sound it is beyond permissible limits…", the division bench of Justice Pradeep Kumar Singh Baghel and Justice Pankaj Bhatia said, while hearing a public interest litigation filed by Advocate Sushil Chandra Srivastava.

Aggrieved by the indiscriminate use of Loudspeaker in his neighborhood in Prayagraj, the petitioner had filed the petition against use of loudspeakers in residential areas, regardless of time. This, he said, was a gross violation of Rule 5 of the Noise Pollution (Regulation and Control) Rules, 2000 (the said Rules).

The said Rules were framed by the Central Government in exercise of its powers under Section 3(2)(ii), Section 6(2)(b)(1) and Section 25 of the Environment (Protection) Act, 1986 to control noise generating sources.

Thereafter, many judicial pronouncements tried to curb noise pollution and enforce these laws. Provisions and policies relating to permission for use of amplifiers, declaration of silence zones, maximum permissible limit of sound, etc. were made by the central government and the Apex Court, but in vain.

"In India the people generally do not consider the noise as sort of pollution, hence, most of the people are not fully conscious about the effect of the noise pollution on their health", the bench observed.

The state submitted that it had constituted a team of revenue and police officials to make regular inspection by visiting various religious places and other public places where the loudspeakers / public address system are used on permanent basis. A mobile application was also under trial by IIT, Kanpur for carrying out feasibility study on implementation of measures for measurement and mitigation of noise pollution.

The court on the other hand noted that as per the charts issued by the DM of Prayagraj, total 1860 loud speakers were found without any license in the city. Notices were issued to the violators however no action was taken against any of the offender and the state had failed to put forward any valid reason for non-compliance of the law.

"The State Government and its functionaries have miserably failed to perform their duties cast upon them under the Rules, 2000. They have equally failed to enforce the direction of the Supreme Court issued from time to time", the bench said.

The Supreme Court had in the case of Noise Pollution (V), In Re, 2005 (5) SCC 733, issued extensive guidelines to curb noise pollution in the country and held that right to peaceful environment was both a human as well as a fundamental right.

The ourt found that the silence zones in the city had been declared without adverting to Rule 2 (e), Rule 2 (f) and Rule 3 (2) of the said Rules in as much as two prominent hospitals of the city and a large number of colleges in the district had not been included in the silence zone. Rule 3(2) of the said Rules cast an obligation on the State Government to categorize the area in industrial, commercial, residential and silence zone for the purpose of implementation of noise standards for different areas.

The court cited a plethora of precedents to indicate how immobile the government had been in deliberately ignoring all the directions so made therein. In view of the Apex Court's verdict in Delhi Air tech Services (P) Ltd v. State of UP, (2011) 9 SCC 354, the Court undertook the duty to enforce the law laid down by the Supreme court and various directions issued from time to time.

The bench made the following order:

Arguments for the Petitioner were advanced by Advocate Arpan Srivastava and for the Respondent by CSC Devi Prasad Mishra.

Last month, the Punjab and Haryana High Court had also passed a similar order to curb the unregulated use of loudspeakers.