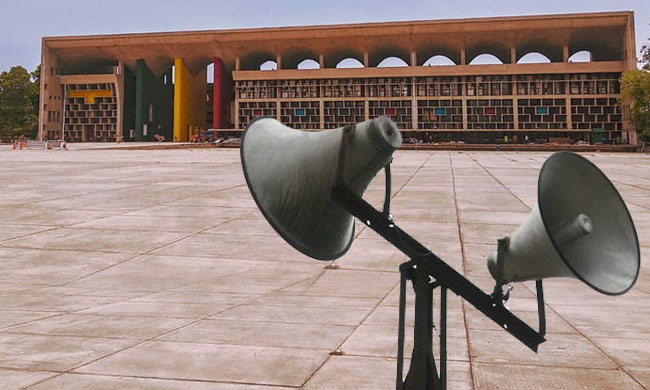 Disposing off various Writ Petitions filed to curb excessive noise pollution in the States of Punjab, Haryana and Union Territory of Chandigarh, the High Court of Punjab & Haryana prohibited the use of loudspeakers in the territory without prior permission from the authorities.

An ad-hoc Committee, headed by Advocate M. L. Sarin, was appointed by the court to make suggestions for formulating policies for effective control of noise pollution. The Committee however suggested that there were sufficient laws in place for the said purpose but they lacked implementation. Taking note of this suggestion, the Court held that the three states had failed to enforce Rules 3, 4 and 5 of the Noise Pollution (Regulations and Control) Rules, 2000 (the said Rules), effectively.

While Rule 3 and Rule 4 prescribe that noise level cannot exceed 10dB(A) above the ambient air quality standards in respect of noise for different areas/zones, Rule 5 of the said Rules prohibits the use of loudspeakers without obtaining written permission from the authority. It also prescribes that any sound amplifier cannot be used at night except in closed premises. It also empowers the State Government to permit the use of loudspeakers at night between 10.00 p.m. to 12.00 midnight on or during any cultural or religious festive occasion, not exceeding fifteen days in all during a calendar year.

The bench comprising Justice Rajiv Sharma and Justice Harinder Singh Sidhu observed that the states had not taken sufficient measures to check noise pollution in their territories, either emanating from the factories or by way of indiscriminate use of loudspeakers/amplifiers. Reliance was placed on the verdict of the Supreme Court in Anirudh Kumar v. Municipal Corporation of Delhi & Ors., 2015(7) SCC 779, wherein it was held that noise generated up to unpleasant or obnoxious levels violates the right of the people to a peaceful, comfortable and pollution free life guaranteed by Article 21 of the Constitution of India.

Consequently, in addition to ensuring strict implementation of Rules 3, 4 and 5 of the said Rules, the court directed that the DM/ SSP/ SP of each district shall be personally responsible to:

(ii) The peripheral noise level of a privately owned sound system does not exceed 5dB(A) more than the ambient air quality standard specified for the area;

(iii) Ensure that no loudspeakers are permitted 15 days before and during the course of annual examinations;

(iv) Ensure that motorcycles throughout the states are duly fitted with silencers; and

(v) Prohibit the use of pressure horns.

The court also took judicial notice of glorification of liquor, wine, drugs and violence in songs in the States which affected the children of impressionable age. Accordingly, the States were directed to ensure that:

(i) No one carries fire-arms to any procession or to any educational institution;

(ii) No songs glorifying the liquor, wine, drugs and violence are played in any event;

(iii) No child below the age of 12 years enters multiplexes where "A" certificate films are screened;

(iv) Obscene posters are not fixed in any district near the educational institutions.