Exclusive; This Powerful Dissent of Prof. Sridhar in CIC Order shows 'all was not well in #DDCA' 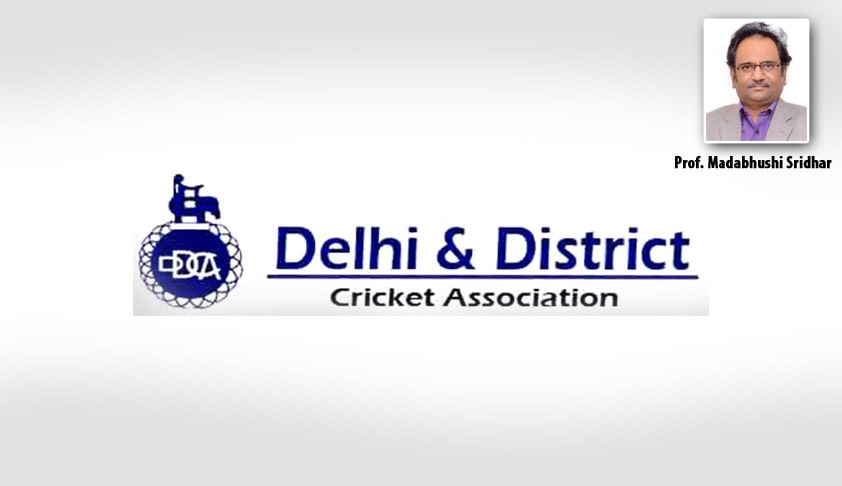 Even as the nation remains transfixed with the controversy surrounding Arun Jaitley’s role as the head of the scam-hit DDCA from 1999 onwards for a period of 13 years, it has now come to light that the Central Information Commission by a majority of 2:1 vide judgment dated 13.04.2015 has deferred for consideration the question as to whether the DDCA would be a public authority within...

Even as the nation remains transfixed with the controversy surrounding Arun Jaitley’s role as the head of the scam-hit DDCA from 1999 onwards for a period of 13 years, it has now come to light that the Central Information Commission by a majority of 2:1 vide judgment dated 13.04.2015 has deferred for consideration the question as to whether the DDCA would be a public authority within the meaning of section 2(h) of RTI Act. The CIC adjourned the matter sine die in view of the fact that the decisions of the Central and State Information Commissions, declaring certain entities as public authorities under Section 2 (h) of the RTI Act, primarily on the basis of allotment of land by the appropriate government at highly concessional rates, have been either stayed or in one case set aside by High Courts.

The CIC by its majority verdict left it open for the parties to agitate the matter before the Commission again after the superior courts have pronounced their decision.

However, in a powerful dissent, Information Commissioner M.Sridhar Acharyulu  slammed the DDCA for being “not responsive, manipulative and misinterpreting everything to their advantage and winning the consent of different bureaucrats who dilly dallied with file movement over years and years” and also the higher officers of the Ministry for not being serious while dealing with a big stretch of highly valuable land under the control of DDCA.

The proceedings before the Full bench of the 3 commissioners of the CIC arouse out of a reference made by it by one of the Information Commissioners, M.L. Sharma, on a complaint preferred by RTI activist Subash Chandra Agrawal on 8.6.2012 stating that there was no response from the DDCA to his RTI petition dated 30.4.2012 seeking details about a) land provided to stadium of DDCA at Feroz Shah Kotla Ground, b) title, ownership/lease/freehold/rent, rate of rent, subsidy given, other facilities, security, etc. provided by Government or state resources, c) activities undertaken, eligibility criterion for enrolment of membership of association, total number, various categories, d) number of voters, e) powers and facilities available to office bearers, f) number of mailed envelopes containing proxy-forms returned undelivered, g) number votes received at elections held last, h) system of distribution of complimentary tickets/passes during several matches conducted by BCCI and IPL etc, i) number of envelops with such passes for matches held till 30th April 2012, along with, j) envelopes returned undelivered, k) utilization of seats fell vacant due to return of complimentary tickets, l) relationship of DDCA with BCCI, etc and m) any other related information along with file-notings on movement of the RTI.

Mr. Agrawal had contended that the DDCA is a Public Authority under section 2(h) of the RTI Act because it is substantially financed by the Central Government in as much as a plot of land measuring 14.281 acres at Ferozshah Kotla has been allotted to it on temporary basis for a period of 33 years w.e.f. 1.4.2002 and DDCA is required to pay license fee @ Rs. 5,500/- per acre per annum for the open space and at the rate of 5% per annum @ Rs. 88 lacs per acre for built up area, revisable after every 11 years on the basis of land rates prevailing at that time. The land is located in the heart of the capital city of Delhi and the fee structure grossly falls short of the prevailing market rates and this can be construed as indirect substantial financing of DDCA.

It was further contended by the complainant that the DDCA had government nominees on its Board of Directors, it got exemption from Entertainment tax, and Income Tax, besides it was holding IPL with its own team - Delhi Dare Devils, which are attributes that characterize DDCA as ‘public authority’ under RTI Act.

Per contra, on behalf of the DDCA, it was contended that it is not enjoying Government land at concessional/minimal rates, it is paying Rs. 24,64,415/- per annum as yearly lease rent to the Central Government and it does not enjoy exemption from Income Tax. The land allotment is also subject to the approval of lay out plan by ADG (Arch), CPWD and it is required to use the land only for the purpose for which it has been allotted and not for any other purpose; that DDCA is not an authority of self Government established or constituted either by or under the constitution or by any other law made by the Parliament or State Legislature; that DDCA is neither owned nor controlled by the Government, that the DDCA is not a body or institution which is essentially financed by the Government; and further that DDCA is not in receipt of any grants from the Government or any of its instrumentalities and that its affairs are managed by self generated funds and the grants of BCCI alone.

On a perusal of the material produced before it, the CIC opined that the DDCA’s working is not transparent and there are serious shortcomings in its governance process. The CIC also found that the DDCA has carried out extensive illegal construction in violation of terms of lease of the land as brought out in the inspection report of L&DO officials.

The Commission said, after referring to the profit / loss accounts submitted by DDCA for the financial years ending on 31.3.2011, 31.3.2012 and 31.3.2013 that which showed a profit of Rs. 5.65 crores, Rs. 4.71 crores and loss of Rs. 65.87 lakhs respectively, that given these figures and the licence fee for land, as determined at market rate given by L&DO, “it is clear that the concession given by L&DO to DDCA is “material / of considerable value” without which DDCA would struggle to exist.”

However, the majority refrained from answering the issue or deciding the case, in view of the fact that the decisions of the Central and State Information Commissions, declaring certain entities as public authorities under Section 2 (h) of the RTI Act, primarily on the basis of allotment of land by the appropriate government at highly concessional rates, have been either stayed or in one case set aside by High Courts.

The CIC by its majority verdict left it open for the parties to agitate the matter before the Commission again after the superior courts have pronounced their decision.

However, Information Commissioner M.Sridhar Acharyulu made bold to declare in his dissenting judgment that the DDCA, though an NGO, is being substantially financed by appropriate Government indirectly through allocation of huge land in heart of New Delhi with substantial concession worth thousands of crores of rupees and monopoly of unlimited value, is the Public Authority as defined under section 2(h) of RTI Act, on both questions of law and facts.

Mr. Acharyulual on a perusal of the files found that there are substantial violations of lease conditions as complained, for which demand notice for charges could have been issued. He observed “The L & DO submitted files to the Commission. They revealed so many startling facts, which also established the ‘state control’. Some aspects of of those 202 pages of the file of the L&DO are as follows:

Page 198 is a comprehensive note on DDCA, wherein it was stated: “It is indicated in para (iii), iv, viii, and ix, it is evident that through the allotments were made to DDCA from time to time on institutional land rates for built up area. Since it’s an institutional allotment, commercial rate can’t be levied on that. In view of this up to date Government dues be levied on institutional rates.”

In view of the serious allegations against the DDCA, Information Commissioner Sridhar Acharyulu felt strongly the need for:

1. the Serious Fraud Investigation Office to conduct a thorough probe into all financial irregularities of DDCA including the allegations made by various personalities and mentioned in this order and fix the liability on persons involved;

2. the D&LO to secure compliance of all conditions in the lease deed including collection of charges and damages running into crores of rupees as calculated by its department ignoring pressures if any, and take necessary action as per law for breach of conditions, if found.

3. the Ministry of Skill Development, Entrepreneurship, Youth Affairs and Sports to consider evolving alternatives and explore the possibility of better utilization of resources and facilities given to DDCA including the monopoly over Delhi Cricket for responsible performance of its duties to fulfil the objectives,

4. the government concerned should evaluate the commercial value of the land, which is pending for more than two decades, so that government of the day will have enough information at its command to take correct decisions about allocation of land for appropriate value in public interest.” (Para 76)

He then proceeded to pass the following directions:

“a) the General Secretary of DDCA to show cause why penalty cannot be imposed against him for not furnishing the information as sought by appellant/complainant within 21 days from the date of receipt of this order.

b) the DDCA to designate PIO and create necessary infrastructure to receive and respond the RTI applications, in compliance of legal duties under RTI Act as public authority

c) to comply with Section 4 of RTI Act within one month from date of receipt of this order.”