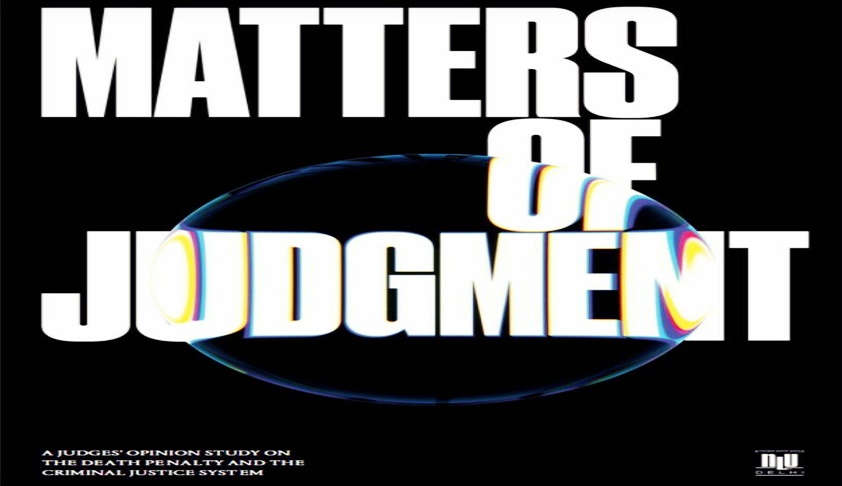 The Centre on the Death Penalty of the National Law University, released on November 8, a Judges’ Opinion Study, titled “Matters of Judgment” on the death penalty and the Criminal Justice System.  Livelaw seeks to answer some questions, arising out of the study.Q: Why is the study significant?A: The aim of the study is to explore the opinions of former judges of the Supreme Court of...

The Centre on the Death Penalty of the National Law University, released on November 8, a Judges’ Opinion Study, titled “Matters of Judgment” on the death penalty and the Criminal Justice System.  Livelaw seeks to answer some questions, arising out of the study.

Q: Why is the study significant?

A: The aim of the study is to explore the opinions of former judges of the Supreme Court of India on the death penalty and more generally on the state of India’s criminal justice system as far as it was relevant to the death penalty.  The study focusses on the reasons the former Judges offer for both abolition and retention.  It also seeks to reveal how the former Judges understood the doctrine of rarest of rare, laid down by the Court in the Bachan Singh case, way back in 1980.

Does the study attribute the statements to individual former Judges?

It gives the names of all the 60 former Judges interviewed for the purpose, but does not attribute any statement to individual former Judges.   The reason cited for adopting this methodology is that the readers’ attention should not be distracted to which former Judge said what, but remain focussed on what they said.  This, appears to be a reasonable decision, especially when we are told that none of the former Judges interviewed by the Centre’s team, wanted anonymity to their views.

A overwhelming majority of the former Judges interviewed had adjudicated death penalty cases (47), and confirmed 92 death sentences in 63 cases.  How is the data gathered from the  interviews with these former Judges likely to be of use?

The study elicits the views of the former Judges on torture, integrity of the evidence collection process, access to legal representation and wrongful convictions.  Also included were questions on ‘rarest of rare’, the appropriate role for aggravating and mitigating factors and the nature of judicial discretion during death penalty sentencing.

Although majority of the former Judges interviewed are retentionists, they are extremely unhappy with the use of torture to generate evidence, fabrication through recovery evidence, a broken legal aid system and wrongful convictions.  There were some exceptions, as some Judges offered justifications for this state of affairs, but the concern of majority of them, could be used as new grounds in any campaign against death penalty.  This is despite the fact that only five Judges acknowledged the possibility of error as a possible reason for abolition in India.

Did the former Judges support retention or abolition of death penalty?

What are the other positive aspects of the findings from the perspective of the campaign for the abolition of death penalty?

The second is that most of the former judges interviewed revealed that they imposed death sentences, as a result of their confusion about the import of Bachan Singh judgment.  They admitted that their understanding of rarest of rare  was determined by considerations of brutality of the crime, although Bachan Singh warrants consideration of the mitigating factors favouring the criminal, during the sentencing process.

The former Judges were also confused about the weight and scope of mitigating circumstances.  Opinions varied considerably on whether factors such poverty, young age and post-conviction mental illness and jail conduct could be considered mitigating circumstance at all, despite them being judicially recognised.

Can any aspect of the results of the study be construed as discouraging to the campaign of the abolitionists?

Well, the fact that most Judges believed that there was no alternative to their discretion in sentencing, or that there could be principles of sentencing which a Judge could follow.   The study reveals that more than half the Judges believed that the background of a judge, including their religion and personal beliefs, were factors that influenced the choice between the death penalty and life imprisonment.  While this may be considered as a setback to the campaign, this can also used as a reason for reforming the system, as this had led to many flawed death sentences.

The Supreme Court, in recent years, has been imposing death sentences less and less, and instead considered the life imprisonment without remission for a fixed period as the alternative in heinous offences involving murder.  Do former Judges approve of this shift?

The study shows that 25 judges believed that this shift is legally valid, while seven found it to be violative of constitutional mandate and separation of powers, as the Executive’s powers to remit a sentence are sought to be curtailed by the Judiciary.

Any prominent names among the 60 former Judges interviewed for the study?

Yes, indeed.  Justice Arijit Pasayat, who is considered to have imposed death sentences liberally during his tenure, is among them.  Among the former Chief Justices, one finds Justices A.M.Ahmadi, A.S.Anand (who recently passed away), K.G.Balakrishnan, M.N.Venkatachaliah, and R.C.Lahoti.   One surprising omission is Justice Sathasivam, who had delivered the landmark judgment in Shatrughan Chauhan in 2015, which had introduced key safeguards in the death penalty jurisprudence.  It is not clear whether the Centre could not get him to be interviewed because of the office which he holds as the Governor of Kerala.

Justice Aftab Alam, who confirmed the death sentence on Kasab, is also among the 60 former Judges.  But one doesn’t know whether Justice Alam had any second thoughts on sentencing Kasab to death after his retirement, because of the methodology adopted by the Centre to anonymise the views.

But one could make intelligent guesses.  Justice Pasayat, of course, would have been a staunch retentionist, while Justices Asok Kumar Ganguly and S.B.Sinha would have been abolitionists in their answers.