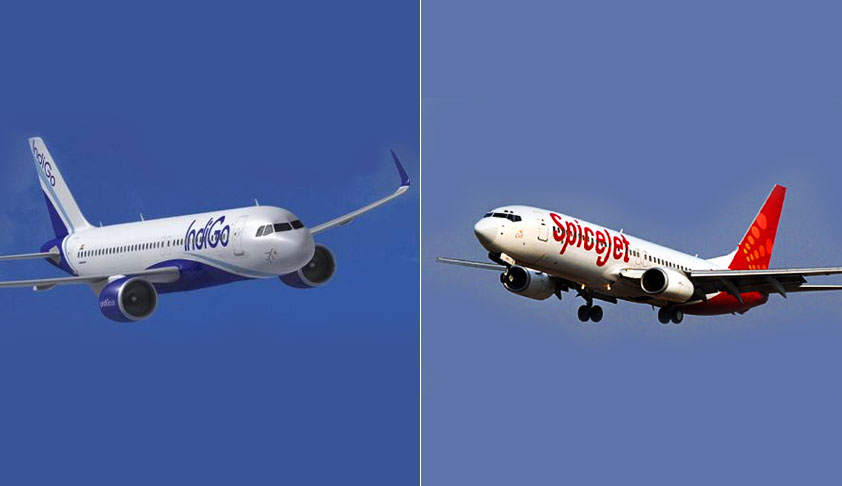 The Supreme Court on Friday refused to interfere with DIAL’s administrative order directing IndiGo, SpipceJet and GoAir to shift their flight operations to and fro Mumbai, Kolkata and Bengaluru from Terminal 1 to Terminal 2 of Indira Gandhi International Airport during the redevelopment of T-1.A bench of Chief Justice Dipak Misra and Justice DY Chandrachud refused to interfere with...

The Supreme Court on Friday refused to interfere with DIAL’s administrative order directing IndiGo, SpipceJet and GoAir to shift their flight operations to and fro Mumbai, Kolkata and Bengaluru from Terminal 1 to Terminal 2 of Indira Gandhi International Airport during the redevelopment of T-1.

A bench of Chief Justice Dipak Misra and Justice DY Chandrachud refused to interfere with the February 13 order of a division bench of the Delhi High Court which had also refused to grant any relief to the airlines while holding public interest over business interest.

In keeping with the order of the high court, the apex court extended the deadline for the airlines to suggest to DIAL such other sectors which they would want to shift to T-2 to reduce passenger volume at T-1.

“Having heard learned counsel for the parties, though we are not inclined to interfere, we extend the time under the first direction issued by the High Court, till 3rd March, 2018 (to suggest other sectors to DIAL for shifting).

It is to be noted that DIAL had last year directed the three airlines to operate its flights, to and fro Mumbai, Kolkata and Bengaluru w.e.f. January  4, 2018 from Terminal-2 of IGI.

A single judge bench had on December 22 last year dismissed IndiGo’s challenge to the order but extended the deadline for part shifting to February 15.

IndiGo then moved in appeal where the Division bench of high court also denied any relief while observing also rejecting IndiGo’s prayer that T-1 be dedicated to exclusively to its use and calling upon SpiceJet to move out its entire operations to T-2.

The division bench had remarked that the suggestion “springs from the appellant's own commercial considerations and has not been made in the larger public good… Going by the volumes of passenger traffic generated by them, the appellants/IndiGo may be on top of the heap, followed by the respondent No.5/SpiceJet and then the respondent No.6/GoAir, but this consideration would not entitle IndiGo to claim monopoly over T-1, to the exclusion of the rest”.

“In the present case, public interest lies in expediting the redevelopment activity at T-1, which is a purely administrative decision. The date of shifting a part of the operations from T-1 has had to be pushed thrice over, thereby delaying the date of commencement and postponing the conclusion of the renovation work. It is not as if the appellants/IndiGo, and for that matter, SpiceJet and GoAir have been banished forever from T-1. If we may twist the American idiom, “My way or the Highway” to fit the present context, then the appellants/IndiGo cannot be heard to say that it is either their way, or the run way. The appellants/IndiGo are tending to forget that this part relocation from T-1 to T-2 proposed by the respondent No.2/DIAL, is only a temporary measure and once T-1 is renovated and commences its operations after capacity building, all the airlines can operate from there full throttle and take wings,” it had said.

The high court had then granted “last opportunity of one week to the appellants/IndiGo and the respondent No.5/SpiceJet to approach DIAL to suggest other sectors that they would be ready and willing to shift from T-1 to T-2, as long as they collectively meet the yardstick of one third passenger traffic volumes of their operations at T-1”.

The bench was also of the view that GoAir, which has shifted its operations to T-2 cannot be dispossessed again.

This order was challenged before the Supreme Court which also refused to interfere.

All this while, DIAL has been contending that 'IndiGo's traffic in financial year 2017-18, which is estimated at 18.1 mppa approx., it cannot operate entirely either out of Terminal-1 (capacity of 17 mppa) or Terminal-2 (with a capacity of 12 mppa).

DIAL had also submitted that, even with the shifting of operations of Go Air to Terminal-2, the traffic at Terminal-1 is expected to be approx. 23 mppa, which would be in excess of maximum existing capacity of 20 mppa, which requires to be further reduced to between 13 to 17 mppa.

It had also contended that peak fog season in January causes flight delays resulting in an increased pressure on the infrastructure of the terminal and endangers the safety and security of the passengers as well as the flights operations and therefore, 'IndiGo's financial concerns cannot take priority over public interest of development.